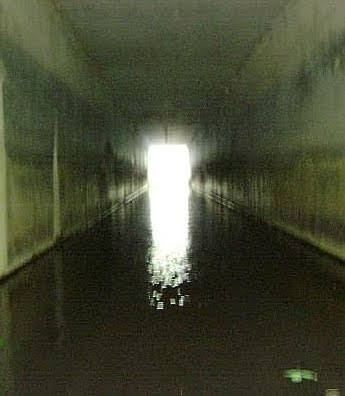 Another superb geocaching adventure today, courtesy of Chris "Vortexecho" Whittemore, over yonder in Durham—a 5-difficulty/5-terrain (the "5" rating being the most difficult) extravaganza called Pandora's Box. It features quite a few stages over a distance of several miles, and each stage presents its own physical challenge and/or brain-numbing puzzle to solve. Went out this morning, bright and early, with a group of twelve, four of whom were armed with "keys" that had been previously found, all of which are necessary to unlock the container that's hidden at the final stage. Without giving too much away, some of the highlights included going into tunnels under the highway; clambering over (and into) a large, abandoned, and singularly distasteful structure; climbing way up into trees; crossing rivers on fallen timber; and sorting out puzzles of various kinds, each of which required participation by the entire group.

Most refreshing was to get together with a number of people, most of whom didn't know each other well (if at all), and having a common objective, which required working as a team to achieve. We had males and females, young (8 to 10) and...uh...mature (50s), and even a Ranger Fox who, perhaps affected by a certain rather toxic stage, wanted to eat people's brains. There was nary a slacker in the bunch—everyone made a valuable contribution to the team—and in the end, after spending the better part of the day on the trail, we were able to claim the final cache. By the time I got home, I looked (and felt) as if I'd been dragged through a sewer, lacerated with briers and barbed wire, and eaten up by mosquitoes whose disregard for DEET bordered on the fanatical...and that shower was more welcome (slightly) than the post-cache martini.

Another first-class job by Vortexecho, who accompanied us on the journey, no doubt to make sure at least most of us got out of the woods with our brains.

Getting ready to rock 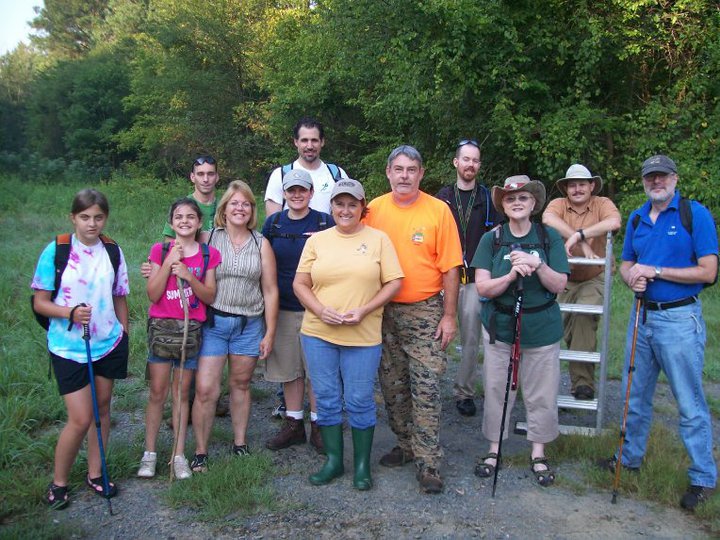 One of the few easy passages

The Dark Water Passage
Ms. 3 Eagles High: "Hey, did you hear that? The sound of millions of souls, trapped for all eternity, screaming in unutterable torment?"
Little Eaglet: Yeah! Cool!"

"Absolutely NOTHING to see here. Move along."

Posted by Stephen Mark Rainey at 12:47 AM