Music From the Shadows 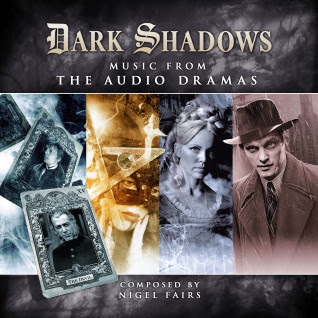 I've been on a Dark Shadows kick lately, in case that hasn't been obvious to you who who've lurking in dark corners. (I know you're lurking; I've been watching you. While you're here, how about dusting those corners for me, thx.) Big Finish Productions, as you may well know, has released something in the neighborhood of thirty Dark Shadows audio dramas, of which I've written three. A while back, Big Finish compiled the scores from several of the productions (including those I wrote) in two volumes. I finally got around to picking up the first of them, and I must tell you, if you enjoy somber, eerie mood music, then this stuff is absolutely for you. The scores, composed by Nigel Fairs, provide effective ambiance for the audio dramas, but because the music is necessarily muted in favor of the actors' vocal performances, getting a true feel for its depth and quality is difficult. Listening to it all by its lonesome, it seems a whole different creature — oftentimes mesmerizing and occasionally unsettling. Fairs interpolates numerous motifs from Robert Cobert's original Dark Shadows scores, capably creating a sense of continuity with the original show, though, in the overall, his original work is in no way derivative. Several tracks from the various dramas bring to mind the dark, orchestral style of Dead Can Dance or Nox Arcana, which, though departing from the more familiar, minimalist flavor of Cobert's signature themes, still conjure an atmosphere apropos of Dark Shadows. All vanity aside, his score for Curse of the Pharaoh strikes me as the best of his work, at least on this album. It's relentlessly deep and throbbing, highlighted by reverberating choral passages that convincingly conjure haunting images of ancient Egypt.

Unfortunately, at least with the download version, the individual tracks are not identified by name or the story they accompany. I recognize the music from the three that I wrote — The Path of Fate, Curse of the Pharaoh, and Blood Dance — but without track listings, I can't differentiate the scores from The Skin Walkers, The Wicked and the Dead, Echoes of Insanity, Final Judgement, and London's Burning. It would be nice if the cuts were identified on the Big Finish website. Regardless, taken as a whole, this volume is an excellent addition to wealth of music available from Dark Shadows' various incarnations, from the original ABC-TV series of the 60s and 70s to Tim Burton's 2012 feature film, nicely scored by Danny Elfman. I'm more than a little inclined to go ahead and pick up the second volume of the audio drama music, which includes music by David Darlington, Nigel Fairs, and Mike Maclennan.

You can acquire these volumes, as well as the complete range of Dark Shadows audio dramas, from the Big Finish website. They're available on CD as well as via download.
Posted by Stephen Mark Rainey at 1:18 AM