There are many such locations in southern Virginia: once-thriving farms and factories, formerly affluent neighborhoods, opulent southern colonial mansions now fallen to ruin. A geocaching run through Danville and surrounding Pittsylvania County took me to quite a few of them today. Last night, I rode up to Martinsville and spent a very pleasant, very relaxing evening with Mum, reminiscing on our many good times over the years, particularly down in Georgia at her parents'. This morning, I headed over to Danville to hunt yet more caches that have popped up in the vicinity in the past month or so. I found a handful of entertaining hides, had a fabulous (and half-price) lunch at Tokyo Grill (which, for sushi, has become quite a favorite of mine — see some of my blogs about Danville), and then met my friend Audra and her son, Zachary, for a caching expedition through northern Pittsylvania County. After 80-degree weather yesterday, it was back to winter today, with cold, biting winds and occasional rain, but this deterred us none at all; fortunately, the rain tapered off and remained scarce for most of the afternoon. 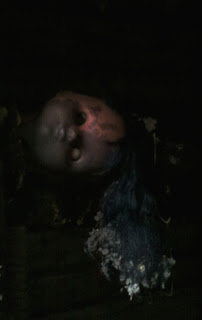 Our hunt led us to a few truly forgotten, lost places that make one wonder just what might have transpired over the years. One of the sites we found had, at one time, apparently been a thriving neighborhood, with a scenic lake, a tennis court, and lord knows what other amenities; now it's an overgrown wilderness, home only to the local wildlife. The most intriguing of our stops was a once-expansive homestead, now completely overtaken by the forest. The main house is a collapsed ruin, the barn and outbuildings barely peeking out through dense barriers of trees. Inside one of the old structures, we came upon the decomposing head of an old doll nailed to the wall, which gave poor Audra a bit of a start — at least, that's what I gathered from her nervous, near-hysterical laughter upon her discovery of the thing. Our target was an old well, some fifty feet deep; a potentially treacherous place to hide a cache, yes, but we were smart — we let Zachary do the dirty work. (Audra wasn't too worried; if she lost him, she's still got another young 'un back home.)

An added bonus was stopping off to chat briefly with the owner of several of the coolest caches in Danville, Mr. Klaussinator his own self, as well as his daughter, who, in geocaching circles, goes by the name Sunpoppy. At the end of the day, we had added another ten or so caches to our respective totals; today was more about quality than quantity, and I'd say we certainly got it.

Till the next outing....

I love those abandoned old places. There will be more and more of them as time passes. The European press just did a nice essay about how the rural areas of the USA are slowly draining out as people move to the cities.

What are they thinking??!!