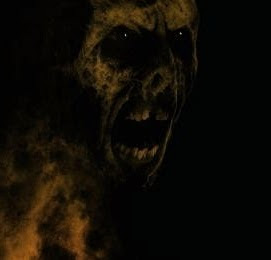 No, not the 2003 movie — which I vaguely remember seeing, though I have little recollection of it — but a night cache called "Darkness Falls" (GC14WGB) here in Greensboro that I have recently adopted, since its creator — the nefarious "Darth Sketcher" — is no longer active. A couple of weeks ago, Todd "Tbbiker" Briggs; Fred "Smashemups" Hudolin; Fred's son, Joe; and I went out and attempted to find this extensive five-stage multi, and we did... sort of. At least a couple of the stages have gone missing since the cache was hidden, back in 2007, and one of them was damaged beyond repair. We made it to the final stage only with the help of a couple of previous finders. Still, since I have a great appreciation for night caches, I decided I would take on the restoration and maintenance of this venerable Darth Sketcher hide.

"Darkness Falls" is actually a Star Wars–themed cache, with each stage named after one of the planets featured in the movies: Stage 1 is Tattooine; Stage 2 is Coruscant; Stage 3 is Mustafar; Stage 4 is Hoth; and Stage 5, the final, is Endor. The stages are located on five different trails on Greensboro's north side, and the hides leading up to the final get progressively more difficult. So far, I've replaced two of the five, which have been little adventures in and of themselves. It's invigorating to be out there on a mission, alone, on a chilly evening — to be the the spooky thing prowling the woods, seeking, finding, and, when necessary, replacing reflector tacks on trees. On my way along the trail, I noticed a two pairs of reflectors high up in a tree, which I thought was an odd place for them, since it was off-track for the night cache. Turned out to be a couple of possums, who appeared quite intrigued by my nighttime wanderings. Possums are kind of cute in their ugly way, and they were welcome company out there.

Shortly after meeting these little folk, however, something big, and I mean it sounded Godzilla big, went splashing through Lake Townsend, and if that wasn't Bigfoot, then Bigfoot was missing his opportunity to sound menacing and impressive. Never did see the noisemaker, but if it was Bigfoot, I suspect he was out there after one of the caches that's named for him on the nearby trail.

I'll have to make couple of more night outings to finish up the restoration, which I hope to get done this coming week. I know there are a few people anxiously awaiting the cache's reactivation, and I certainly don't want to keep them waiting any longer the necessary.

Use the Force, why don't you.
Posted by Stephen Mark Rainey at 10:53 PM

Bigfoot is messing with you. He always does that when there are no cameras around.