Bridges, Bottles, and Photobombs in Bethania

It was another excellent day on the geocaching trail with Robgso (a.k.a. Rob), Cupdaisy (a.k.a. Shoffner), and Diefenbaker (a.k.a. Scott), this time primarily in Bethania, a tiny historical community a few miles northwest of the Winston-Salem. As often happens with caching, we ended up in settings that can inspire some of my best and creepiest horror tales. Not that the locations themselves are necessarily spooky, but they're isolated, dilapidated, and old, and they lend themselves to all kinds of morbid imaginings, at least when, as a writer, you specialize in the Frighten-Your-Neighbors-and-Their-Children-to-Death department. Of course, in certain company, it's pretty difficult to work up a good scare because shenanigans tend to overshadow all else. Witness the image just below. I'm trying to take a picture of a hidden, crumbling, overgrown old bridge above a watery gorge, and somebody up and photobombs it. I mean, that's gauche. Isn't that gauche?

Bethania was the first organized Moravian settlement in North Carolina, dating back to 1759, and it is currently designated as a National Historic Landmark. As soon as you hit the trails here, you are surrounded by an atmosphere of antiquity, the woods full of crumbling, rusting relics of days gone by — most not going back to the 18th century, but some of it certainly prior to my time on this earth. There are numerous old structures long fallen to ruin; bricks, stones, and fixtures from houses and buildings that collapsed or were demolished some untold number of years ago; impressive geologic formations; and dark ponds and marshes which one can easily imagine being inhabited by all kinds of mysterious, primordial entities. I expect that H. P. Lovecraft would have been quite taken with the setting. 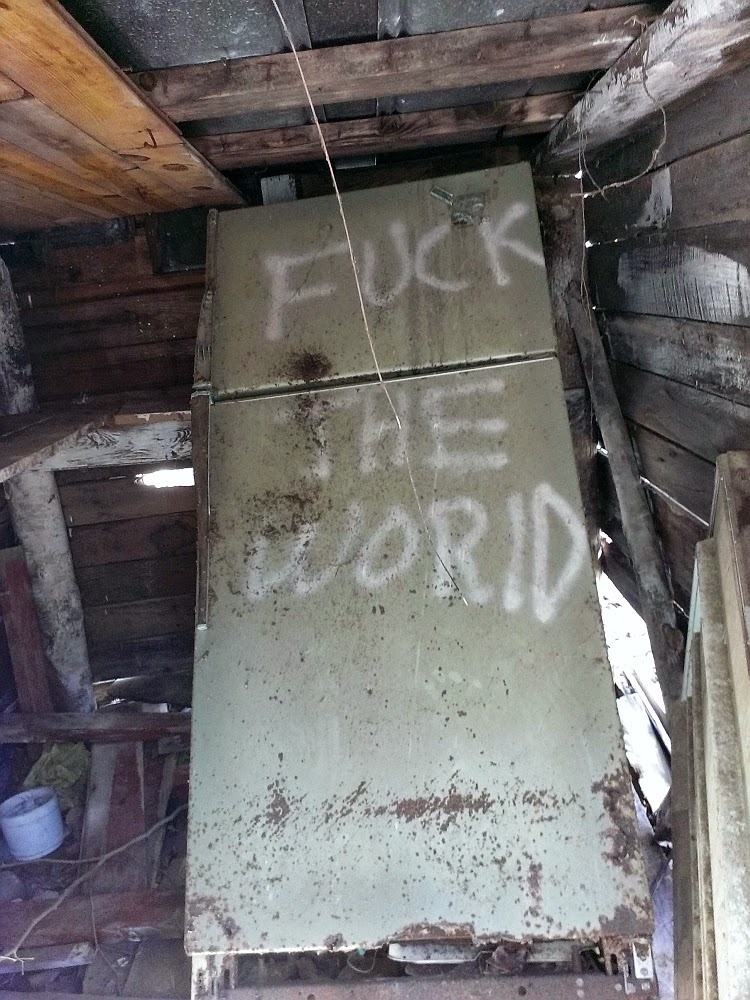 Our favorite location — at least for some of us — was at a cache called "Fuse Box" (GC5MRW7), the search for which led us up a massive, rounded hill, where we found at the top a number of old, half-demolished structures that looked as if they had succumbed to an assault by the Dunwich Horror. We didn't find any bodies, dammit, though we did come upon a refrigerator — this of relatively recent vintage — bearing the spray-painted message "Fuck the World." I can only expect this was the last statement of some poor victim who was annoyed by the unknown horror's very rude rampage. The main house was a pile of wreckage, as seen below, while a few of the smaller outbuildings remained in relatively decent repair, although we didn't venture too far into most of them for fear they might be full of shenanigans. Kind of in that vein, a short distance from the wreckage, someone had lined up, in semi-meticulous fashion, a number of blue glass bottles. Collectible, for all I know, though I collected none of them, preferring to leave them in place for the next unsuspecting witnesses to enjoy.
As far as the caching itself went, we enjoyed it mightily. We got to climb gnarly old rotten trees, scale cliffs like mountain goats, and leaf-surf down frighteningly steep hillsides yelling "cowabunga!" At one cache, which turned out to be hidden in a tree trunk right about eye level, both Rob and I circled it several times without seeing it; when I finally did, I yelled, "Fucking snake!" because, if it had been one, I'd have been chomped but good. Speaking of snakes, Rob and I apparently walked right by a big black one without seeing it, whereas Scott and Shoffner took photos. I do like black snakes. Classy animals. And then, out there in the middle of the woods, we ran into some little statue dude coming out of the ground. Not sure why, but it struck me as kind of an asshole thing to do, to come up out of the ground like that. Scott agreed, as he rightly should; not sure about our other compatriots. Anyway, we passed the little guy by and went on about our caching.

We had a decent, rather late lunch at the Muddy Creek Cafe. All in all, it was good. A very good day — even with the shenanigans and little stone assholes.

You have entirely too much fun in you geocacheing hobby. This is not legal.

Definitely gauche. But gaucheness aside, that looks like one fine geocaching spot! Offering both cache-fun and spook-fun. I wonder if I dreamed about snakes last night because I knew I was going to read this today? Hmmm......

You clearly have Symapthetic Snake Sense Syndrome (SSSS). Not a shabby condition.

So glad you had a good time in 'my backyard'. We're so pleased and proud to have HaydenL in our local community.
This really is one spooky place. I found the "Fusebox" and several others while it was snowing, made for some great photos. Being alone, I didn't have the bother of any photo bombers!