Beware...the Jaws That Bite, the Claws That Catch 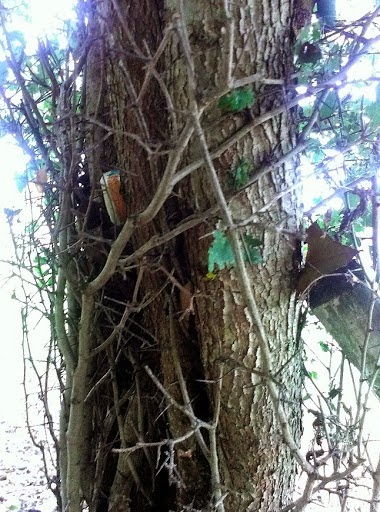 Have you ever had a run-in with a honey locust tree? Lord knows, these arboreal beasts are the work of Satan. So lush and green, so innocuous-looking, rather resembling the mild-mannered crabapple tree. Now and again, though, I find a geocache stashed in a honey locust, clearly placed there by some cacher in a misanthropic mood. Until you get up close to one of these cruel and devious monsters, you probably won't realize that they are bristling with two-inch-long, very pointy thorns that don't just lounge around in passive self-defense mode; they reach out, grab your ass, and stab you repeatedly until blood is gushing from your wounds like so many little geysers. I found a cache — which, for the benefit of future cachers, I shall not identify here — in such a host this morning. The cache was not named "Jabberwocky," but from here on, that is the name by which it shall be known to me. That's it there, in the above-left photo; you can see it peeking out from behind a branch. However, you might not immediately notice that the container is ringed by a crown of thorns. In my zeal to make the find, neither did I until it was too late. I got my signature on that log, all right, but there were utterances.

A few years back, my friend Bridget (a.k.a. Suntigres) and I found a geocache in a honey locust tree. It was a fun one. My online cache log read as follows: "When I reached to grab the cache, I realized what kind of tree I was facing. I might have spoken a dirty word or two." Bridget's log read thus: "When I heard Mark repeatedly crying for his mother, I knew he had found the cache."

There's just meanness in this world.

"Beware the Jabberwock, my son!
The jaws that bite, the claws that catch!
Beware the Jubjub bird, and shun
The frumious Bandersnatch!"
—Lewis Carroll