Sounds and Spirits in Asheville


This weekend, Kimberly B. and I joined our friends Beth and Terry for an overnight outing in Asheville, NC, about four hours west of here in the Blue Ridge Mountains. I had been there a couple of times before, primarily to visit the Biltmore Estate, though that was a couple of decades ago. We didn't go to Biltmore this time but spent most of the trip exploring the downtown area. It's become something of a hipster's paradise since I was there last, but it also boasts craploads of goodies for us staid, middle-aged sorts, at least for when we're not burrowing through underground tunnels and clambering up trees and precarious retaining walls.

Along the way, we stopped at a couple of decent wineries — Lake James Cellars in Glen Alpine and South Creek in Nebo, both of which made very strong showings in the dry reds department — which, for me, is what it's all about anway. Lake James currently offers only three dry reds — a Merlot, a Chambourcin, and a Barbera — but they're all superior by NC standards. South Creek's dry red list is more extensive, not to mention pricier. They specialize in Bourdeux-style (all French grapes), and their reserve wines, at least, are top-notch. To me, though, the highlight of our South Creek experience was the Poor Man BBQ food truck, from which I got a beef brisket sandwich with very spicy sauce that about sent me clear over the moon. A great combo with South Creek's wines.

In Asheville proper, we checked out several bistros, pubs, and wine bars, not a one of which put us out even a little bit. Of special note were The Cork and Keg Bar at The Weinhaus; Sante Wine Bar in the Grove Arcade, which is a beautifully restored public market building, originally opened in 1929, full of eclectic shops and bistros; and, my absolute favorite, The Marketplace, which we visited early this afternoon for things like fried doughnut holes, music, and — wait for it — a bit of wine. What nailed it for me here was the live music by Ben Hovey, trumpet/keyboard player, synthesist, and sonic scientist. He plays electronic fusion — soul, dub, jazz, hip-hop, and world music — that, honest to god, put me straight into musical heaven. Below, I'm embedding a recording of one of his 2012 shows, which runs over an hour. His work can also be streamed for free at Soundcloud. That hour-plus we spent today listening to his magic made my weekend.

Of course there was geocaching. Nothing overly challenging or time-consuming since caching wasn't the main purpose of our trip, but most of the hides I found were entertaining, particularly the virtual cache called "Paley's Passion" (GCJKC9), which took me to the sculpture you see in the photo at the top. It's a 37-foot-tall steel construct by artist Albert Paley, created in 1995. I quite liked it. And last night, Ms. B. showed me up by finding a cache called "Pizza, Pool, and the Paranormal" (GC36RJV) after I had overlooked it. The cache location is the scene of a 1906 massacre, where a man named Will Harris shot five people before being killed by police. Rumor has it that paranormal activity is common at the location, including phenomena such as footsteps, voices, and the apparition of a man dressed in black — who some claim to be the town execution from the late 1800s. We didn't experience any paranormal activity, but thanks to Brugger, I did get my smiley.

Do check yourself out some Ben Hovey and see if you're not as smitten as I. 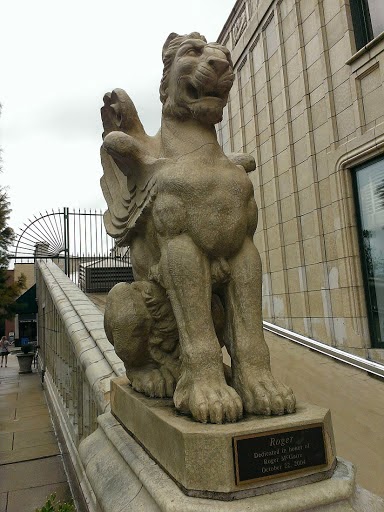 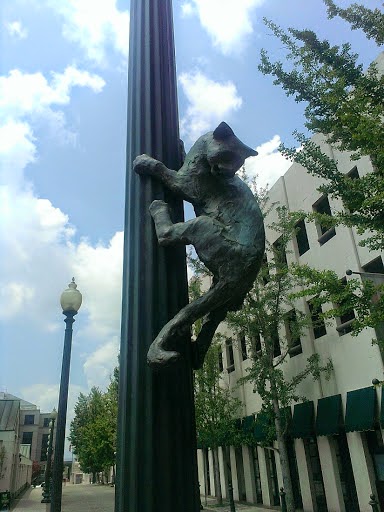 A couple of fun critters we passed along our way
Posted by Stephen Mark Rainey at 8:47 PM