Of Conventions and Culverts


ConGregate is done, geocaches were conquered, the shower is a mess, and I'm off my rocker. For me, between the conventioning and the caching, it was a whirlwind weekend, devoid of much downtime. I participated in several panels and workshops, all of which were well attended, well run, and punctual — something one can't always say, particularly with these smaller, local conventions. Many of the con organizers and staff are longtime veterans of StellarCon and thus know how to run a tight ship, which is a welcome fact for those of us who, as guests, have suffered through conventions that define the term "disorder."

Ms. B. had perhaps too good a time, as you may deduce from the photo above.

During my off time at the con, I made my way around High Point, picking up a few of the remaining caches I had yet to claim in the area. Most were of the quick and easy variety, so today, after stopping for a satisfying lunch at Thai Herb restaurant (at which, I was relieved to learn, the men's room is now open seven days a week — see the photo at right if you doubt it), I went after a particular hide that, for now, shall remain nameless, but which has been on my radar for some time. It's one placed by my friend Scott "Diefenbaker" Hager, and if one were looking for a fair terrain challenge, this one would qualify. In fact, this Diefenbaker hide is evil enough to make me think that, just maybe, Scott ought not be my friend anymore. Because Scott is evil. He is an evil man. This is an evil hide.

The first stage took me into subterranean darkness, but it at least it was possible to remain upright — never mind the fact a bad step could have resulted in mud up to my knees. (Fortunately, because I knew I might be venturing into challenging territory, I came dressed for the occasion.) The first stage proved simple enough, mainly because it stood out in my flashlight beam. Oh, could that be because a bird had built a nest on top of the container? Why, yes it could. Thankfully, at least for the bird, the nest was long-abandoned (the cache has not been found in quite a while). Now, while this stage was a little beyond the ordinary, the real fun was yet to begin. Because the cache's terrain rating at geocaching.com indicated it offered only a moderate challenge, I failed to anticipate the steps required to claim the final stage.

Now, while rating cache difficulty is admittedly subjective, if I were the cache owner, I might bump the terrain rating up from 2.5 stars to perhaps 3.5 (out of a maximum of five). However, since the cache has been out there for a few years, with a good many finds, perhaps we can just conclude that I am a weenie when it comes to terrain rating. Indeed, feel free to call me Mr. Weenie; I shan't mind.

To Scott's credit, he was kind enough to offer me some guidance as I made my way forth, and from looking at past online logs, I think it's safe to say that those of us whose higher brain functions range from marginal to impaired would be hard-pressed to find this cache without a bit of foreknowledge. However, at the end of the day, I got my signature on this cache's log, and I personally know any number of geocachers who couldn't or wouldn't do this thing, no matter how much help they had. So take that from Mr. Weenie!

A few days ago, I undertook a meticulous, much-needed scrubbing of my bathroom. Sad to say, my shower following this cache undid all that. (Go back to that line about human pipe cleaners.)

In all seriousness, Mr. Diefenbaker is a man among men, and I admire his wits, his physical dexterity, and his thoracis. On geocaching.com, you can award favorite points to caches you find particularly impressive, and this one has been so awarded.

I'm wondering whether a second shower might actually be in order. 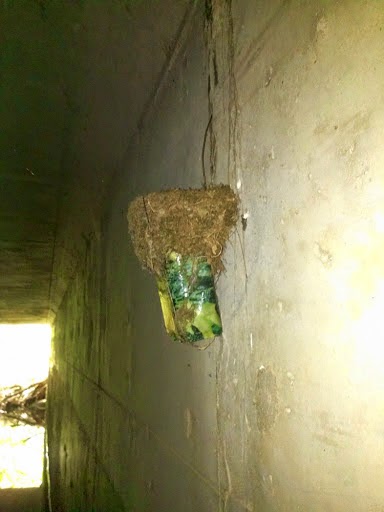 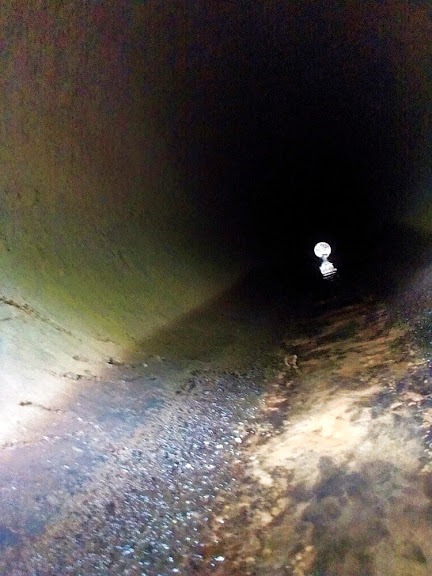 What were attendance numbers for the show? Did anyone say?

I haven't seen actual numbers. ConGregate is basically StellarCon V2.0, and it runs pretty much exactly the same size as the typical SC.