The Sandy Level Creep and Other Creeple People 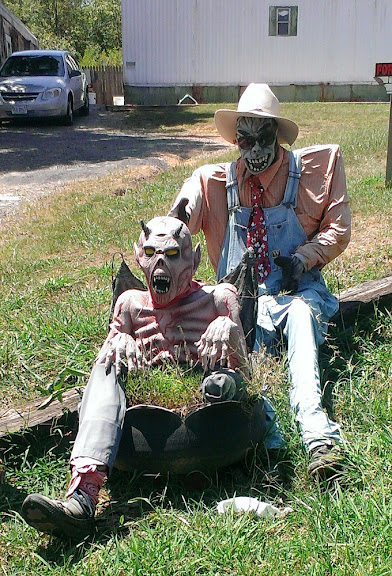 Tonight's book launch party for Young Blood at Mtn' Jax in Martinsville is all done and was done well. A nice turnout resulted in numerous books being devalued with the old man's signature, not to mention those of the Smith Brothers. Got to catch up with several local folks I'd not seen in quite a while, drink some decent beer, and consume what was most certainly the best friggin' burger I've had in many moons. Mtn' Jax turned out to be a hospitable venue for the event, and live music later in the evening added some serious energy to the proceedings.

To kick things off on an apt note, as I was coming into town via the back roads through Sandy Level, I found that the Sandy Level Creep (see "Bold Moon and the Sandy Level Creep" and "The Creep's New Threads") was not only decked out in a new outfit, he had made a friend. What a cheerful duo, these two. As you can see in the photo, they're guaranteed to make passersby feel all kinds of warm and welcome.

About the time things were winding down at Mtn' Jax, I received notification that a new geocache had just been published, aptly titled "Stone Graveyard" (GC6NVNE), and — how happy is this — it was over in Jaycee Park, not far from uptown Martinsville. I managed to get to the park just before dark, hike a short distance on the trail, and make a relatively quick first-to-find. A fitting opening and a fitting ending for a successful book launch. Thanks to those of you who came round, and we missed those of you what didn't make it.

The Creep may not, though. He may not miss you. You might wish he would. He and his new friend....