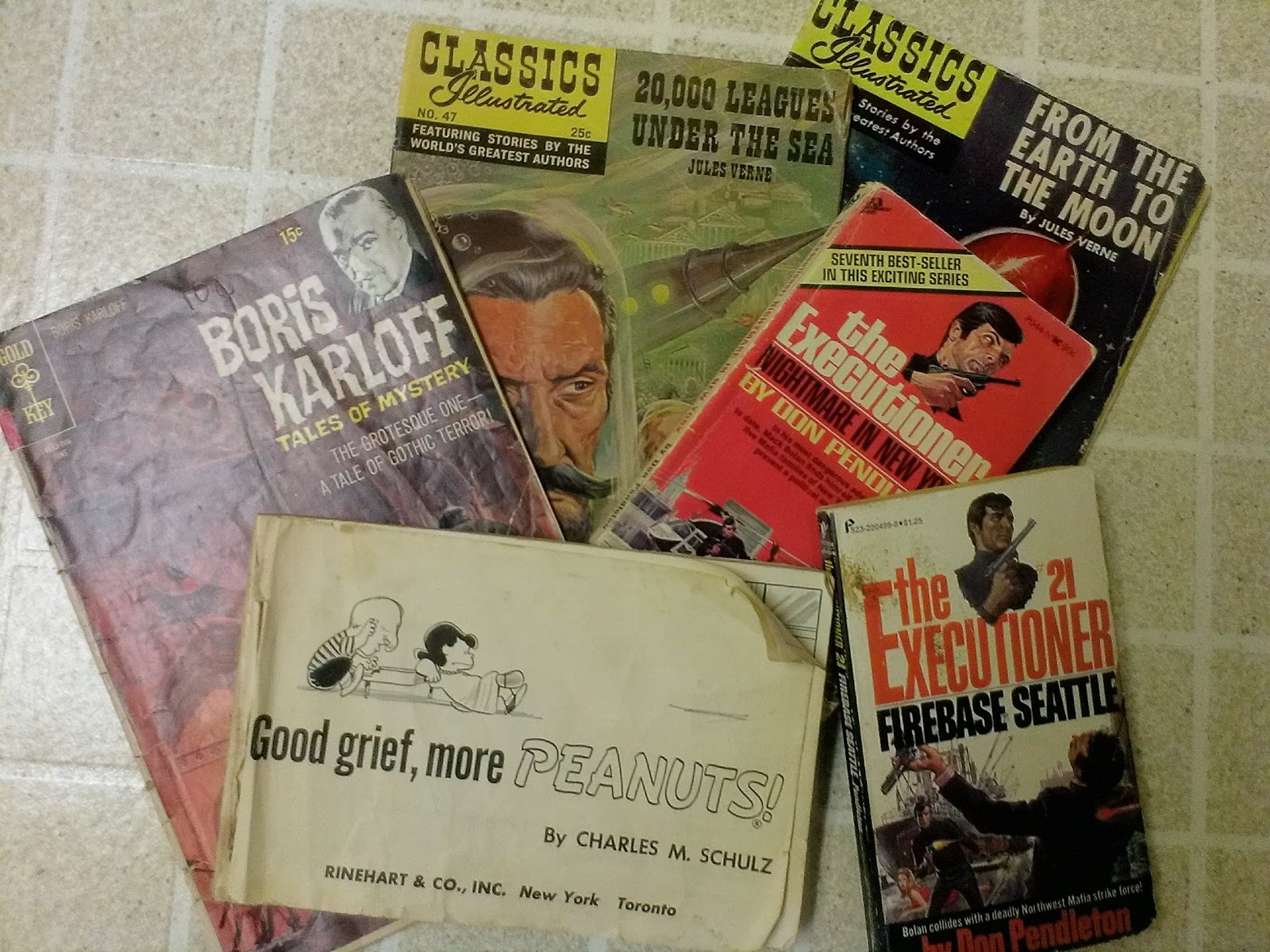 As I'm having to spend more and more time with my mom, going with increasing frequency to my old hometown to care for her, I find myself growing very protective of those old things in her house that still remain from my childhood. There aren't that many, not like there used to be. There's a small corner of the attic with a few toys, books, artwork, and other miscellaneous objets d'arte that belonged to my brother and me, some going back to our pre-kindergarten days. In the back room on the main floor, Mom has graciously saved a bunch of barely intact books that I valued as a kid — I am now mighty glad they didn't get chucked out along with so much junk over the past few decades. That photo you see above is a fair representation of my "literary" appetites at about age twelve. Of course, that's just a tiny sampling, as I became a voracious reader the moment I managed to comprehend two consecutive sentences. Everything from James Bond to Alfred Hitchcock's Three Investigators to Mad magazine to Whitman's Big Little cartoon books to Robert Heinlein and Arthur C. Clarke. A regular borgasmord, to quote a young Mason Reese. (You remember him, right — the ugly little red-headed dude in the Underwood Deviled Ham commercials from the early 1970s?)

It's been a stressful few days for me, what with Mom's condition always preying on my mind, and out there in the world, bedlam reigning perhaps a bit more than usual. You've seen the meme, I'm sure, that reads "My desire to be well-informed is at odds with my desire to remain sane." That's pretty much it. It's depressingly difficult to find even slightly unbiased coverage about events in the world, particularly since every soul alive has an outlet to air his opinion, whether measured and well-informed or vicious and ignorant. I stubbornly remain connected via Facebook since it's the handiest tool for keeping up with the people with whom I most want to keep up. Still, at the best of times, my blood pressure runs a little high, even when on meds. I've come to the conclusion that ordinary bedlam raises it to around 140/90, whereas Bedlam + Facebook = BP 180/100. Bedlam needs to take a breather. As always, geocaching proves itself the best mitigator of high blood pressure. I've been fortunate in that local cachers have kept new ones coming out between here and Martinsville, so that I can usually hunt a cache or three when I'm coming and going. One that I found today earns a favorite point for its high novelty factor — not an uncommon type of hide, but its placement was a lot of fun, particularly in that it was being watched over by a little tree peeper. I saw him perched atop an open fence post, so while I hunted, we had a friendly conversation. After a while, I saw he had gone, and I hope he didn't actually go down into that fence post, as he might end up stuck. On the other hand, given that he was resting quite comfortably on it, perhaps it's one of his favorite hangouts.

Peace be with ye.
Posted by Stephen Mark Rainey at 4:17 PM