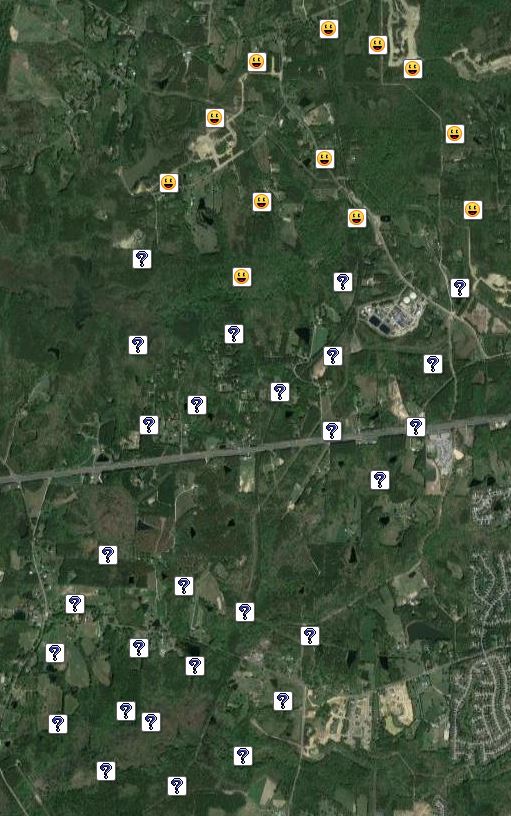 Actually, we only got part of the boot. The geoart you see in the photo is in Wake County, NC, along the American Tobacco Trail. To get the coordinates for each individual cache in the boot print pattern, you must answer a question on the cache listing page about Wake County Parks. Once done, you hike out the trail to claim the caches. There are 40 caches in the pattern, and today, Rob "Robgso," Debbie "Cupdaisy," and Old Man Rodan headed out after a bunch of them. We picked up a dozen in the series, as well as a fair number of other caches along the trail. It was another damn near 80-degree day in October, so we got pretty warm out there, but at the end of it all, we'd put in about six miles, with numerous side trips and some backtracking (thanks to old people leaving their hiking sticks behind); logged 18 caches; and found things like jewel-shelled turtles, giant spiders, horses in pine trees, and pigs in lamp posts.

Most notably, on our journey, we engaged ourselves in a spirited discourse about whether a hissy fit or a conniption ranks higher in the hierarchy of tantrums. We fairly readily came to the conclusion that the conniption is certainly of higher caliber than the mere hissy fit, and our results were confirmed by a Google search, which indicated the question was actually settled about nine years ago. Well, sometimes there's something to be said for reinventing the wheel.

Our final destination before returning home was Carolina Brewery in Pittsboro, where we procured satisfying vittles and liquid refreshment. While I was driving us back, I told Rob that if I fell asleep to wake me up when we got home. Happily, he did this thing.