Yet Another Return to Boggy Creek 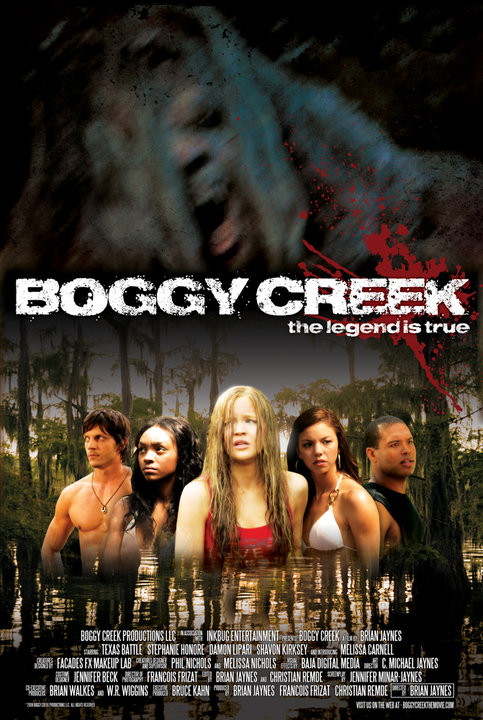 Given that the summer of 2016 hasn't much cared to depart, even into October, the customary Halloween spirit — which usually sets in of its own accord come late September — seems to be struggling a bit. And I hate it. Damn you, summer of 2016! To help compensate for the intemperate temperature, I've ramped up the already substantive number of October horror movie showings at Casa de Rodan, mostly to fine effect. Growing up, I was a big fan of all things cryptozoological, and movies such as The Legend of Boggy Creek, The Creature From Black Lake, et. al. rated highly on my Halloween-o-meter. Not much has changed in that regard.

Over the years, there have been more movies than God could shake a stick at either directly or tangentially related to the Fouke Monster, the subject of the original Boggy Creek flick, and quite honestly, I've never been able to keep track of them. I own the original and its goofy second sequel, Boggy Creek: The Legend Continues, which was produced by, directed by, and stars Charles Pierce, who directed and produced the original. I've seen the first sequel, Return to Boggy Creek, but I don't own it (from what I recollect, it sucked). I think there are a couple of others. In 2011, Boggy Creek: The Legend Is True entered the fray, though I never got around to watching it until today — partly because I read the novelization of the movie by Eric S. Brown, and the whole business seemed a yawner. But, hey, since it's the summer of Halloween, I figured I'd go ahead and give the movie a look.

And what do you know, I was not bored out of my skull, as I confess I expected to be. As a writer, in my fiction and nonfiction alike, I have made it abundantly clear that if a work lacks character development, no matter how spectacular it might otherwise be, it is an organism lacking a skeleton (exo or endo, it makes no never mind). And in this movie, it was kind of nice to get to know a group of young people, stereotypical though some were, who were not altogether worthless piles of crap, à la [insert cheap horror movie title here]. However, there comes a time when the process of getting to know folks ought take a breather and make way for some some bona fide forward progress. In this department, Boggy Creek: The Legend Is True falters — quite a lot really. For a while, I had the impression I was looking at a millennial-era TV soap, with an occasional nod to something a tad out of the ordinary lurking in the nearby woods.

As the movie opens, we get glimpses of our favorite bigfoot-type creature doing bigfoot-type things, such as stomping around through the woods and occasionally dragging hapless victims away in the darkness.

Two young female friends, Jennifer (Melissa Carnell) and Maya (Shavon Kirksey), out for a weekend of relative solitude at a remote cabin that Jennifer inherited from her late father, find themselves playing host to several friends — Dave (Damon Lipari); his bitchy girlfriend, Brooke (Stephanie Honoré ); and Tommy (Texas Battle) — who arrive unexpectedly, anticipating a major party weekend. An enigmatic, perpetually shotgun-wielding young man named Dustin (Cory Hart), who lives in a nearby cabin, warns them that they might ought to leave because, years earlier, something in the neighboring woods killed his wife. When they ask him why he thinks they ought to leave when he plans to remain, he merely brandishes his weapon.

Needless to say, Dustin's warning goes unheeded. For the next hour or so, we are treated to Jennifer moping about her father's death and her poor relationship with her mother; Maya's troubles with boyfriend Tommy, whose immature antics threaten to end the world as we know it; Dave becoming exasperated with Brooke, a city girl who hates the rustic life; and Brooke having a drunken tantrum when she believes Dave is flirting with Jennifer.

Fortunately, after a while, the Boggy Creek Beast makes the requisite appearance and relieves some of the young folks of their troubles. We come to find out that there is not just one Boggy Creek Beast but several — and since we get to see them in all their glory, it's gratifying that they're actually pretty scary-looking.

I'll say no more regarding the plot, but I will go so far as to compliment the young actors in this film, who generally give their roles valiant efforts. Melissa Carnell — who looks to be about ten years old — gives up the longest, broadest, and saddest smiles I think I've ever seen. Damon Lipari, whose character is fairly colorless, comes across as so real that you don't get the feeling Dave's colorlessness is due to bad acting. From the visual standpoint, the movie features some gorgeous backwoods scenery, framed to accentuate its creepiness, much as in the original Legend of Boggy Creek. Now, unlike the other entries in the Boggy Creek mythos, which are set in and around Fouke, Arkansas, this movie takes place near the fictitious town of Boggy Creek, Texas. I suppose if one is a consistency nut (yeah, I border on being a consistency nut), it wouldn't be a stretch to figure that this Boggy Creek actually exists across the state line, just on the other side of Texarkana.

Boggy Creek: The Legend Is Real makes for a reasonably fun outing in the realm of cryptozoological horrors. For the summer of Halloween, I'll surely take it. Three out of five Damned Rodan's Dirty Firetinis.