The Haunting of Stonewall (Episode 4) 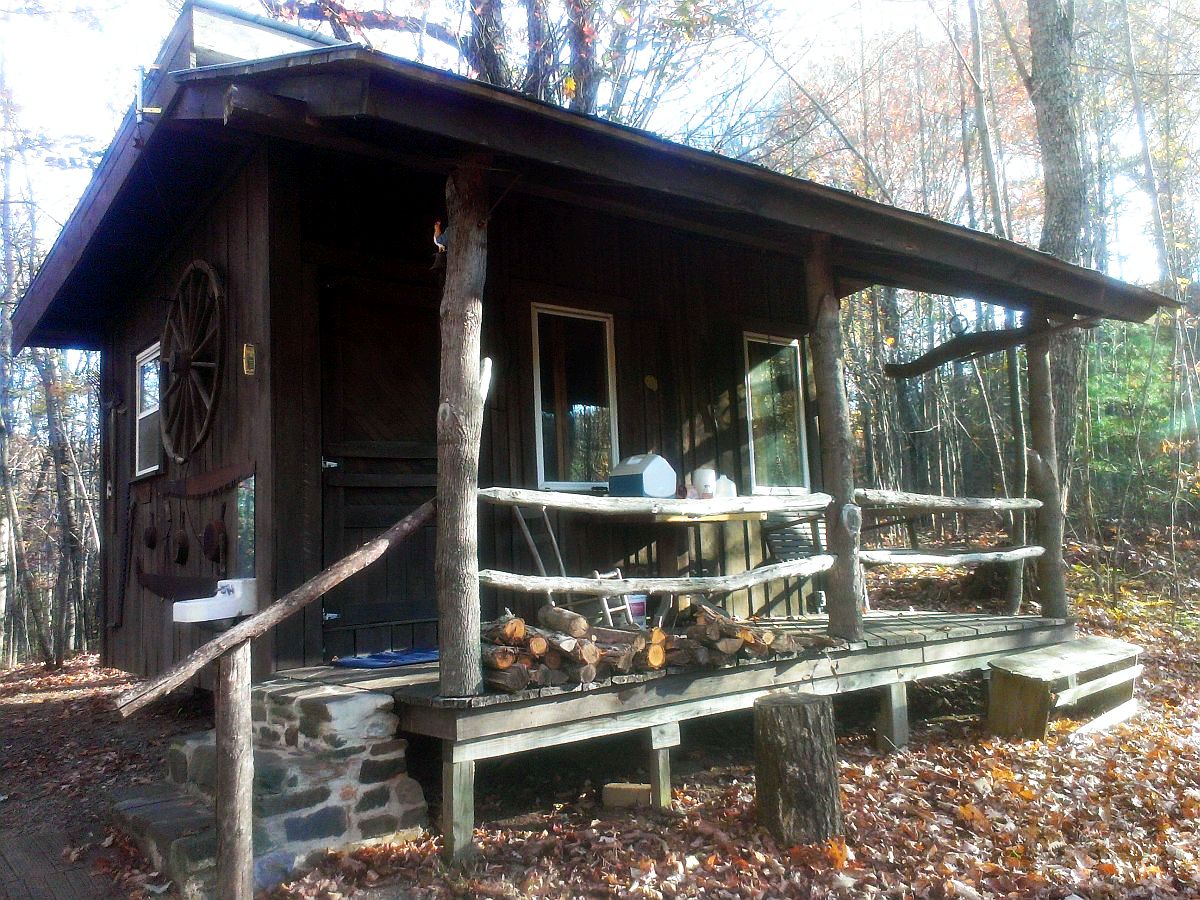 Every fall season, the Blue Ridge Mountains of southwestern Virginia are subject to some extremely frightening visitors — specifically, Ms. B. and me —  and this year we made another of our Halloween pilgrimages to Stonewall Bed & Breakfast, not far from Floyd, VA, that we might spend a couple of nights in the cozy, secluded View Cabin, pictured above, some distance up a winding trail from the main house. If I'm counting right, this was our fourth visit, all but one of which have been during the Halloween season — our second was over New Year's 2011/2012 (see "Stonewalled") — and there's no better place to spend our favorite holiday than in the remote, spooky woods, with several scary movies at our disposal. The cabin itself is a rustic little place: just a single room with a bed, a wood stove, TV and DVD player, and a nearby outhouse for taking care of personal business. Proprietors Scott and Sally Truslow do a wonderful job of managing the property, providing the best, most opulent breakfast spreads one could imagine, a full bathroom for those times you might prefer not-so-primitive facilities, and several dogs and cats that make you feel like one of the family. I hope it is not sad news for us that Scott and Sally are looking to retire and sell the place in the not-too-distant future, as they've been at it for quite a long while. It would be great if someone should purchase and maintain the place so we can continue our favorite tradition, but for now we must leave that for the future to decide.

Kimberly and I headed out early on Friday, 10/28, and after stopping for a geocache near the NC/VA state line, we made our way to Villa Appalaccia on the Blue Ridge Parkway for some first-rate local wine and a picnic lunch. It would not be out of line to say the weather proved a little too perfect — for our entire sojourn, we suffered the most ungodly, un-Halloweenish weather I have ever experienced, with nothing but clear, sunny skies and temperatures in the 80s. Awful, just awful for this time of year. Give us chilly days and nights, with lots of fall colors and the distinctive smell of autumn. Except for the relatively cool nights, this weekend was just another few days of summer. Bah, humbug, bunkum, and tommyrot. 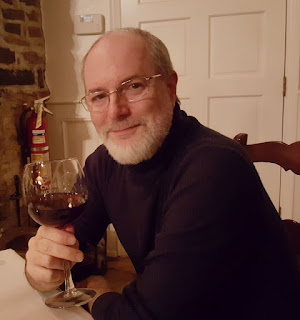 For our first evening's dinner, we hied our asses to Chateau Morrisette, several miles down the Parkway, for some all-around excellent fare, with a bottle of their Archival I red blend, bison meat loaf with smashed potatoes and collard greens for me, wild mushroom and arugula flatbread for Ms. B, topped off with a glass of their rather potent Heritage port wine. Upon our return to the cabin, for some light entertainment, we put on The Houses October Built, about a group of thrill seekers searching for the most extreme haunted attraction in the country. Not exactly a modern classic, but props to the movie makers for offering a few genuinely chilling scenes and disturbing characters. Most apt, given the current spate of supposed creepy clown sightings, that one of the scariest characters in the movie was indeed a clown. 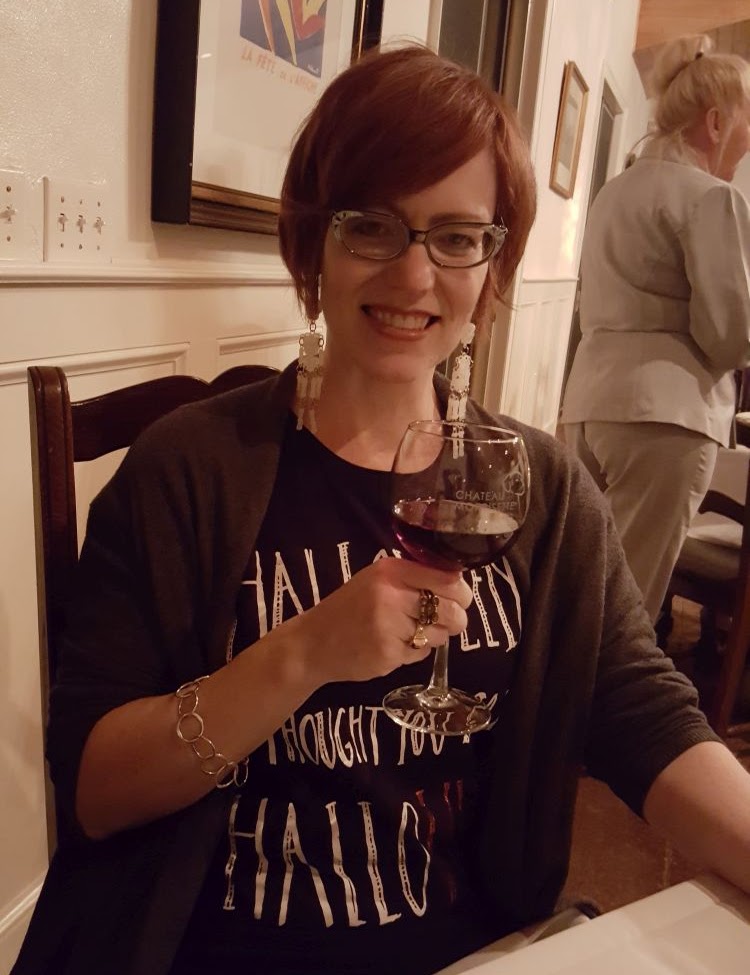 The next morning, following one of Scott's classic breakfasts featuring eggs, sausage, broccoli quiche, biscuits, coffee, and orange juice, Ms. B. and I decided to work off at least the orange juice with a long hike through Rock Castle Gorge, which we've done several times in the past, though this time, sadly for me, there was no geocaching involved in the gorge itself, since I have already claimed all those that have been placed there (happily, there were a couple of other caches in the vicinity to hunt, which I did find, and we met a pair of friendly local geocachers in the process). Kimberly and I did put a couple of calories back on when we stopped for a trail lunch, comprising the remains of the previous day's chicken salad picnic. One of my favorite locations along the trail is the Austin House, the only private property remaining in the gorge, exactly one century old this year, and still inhabited by family members of its builder. The place truly looks to be straight out of H. P. Lovecraft's "The Whisperer in Darkness," but I recently based a short story of my own, titled "Willow Bend," on this precise location. Yes, rest assured that I will post a notice if and when it gets picked up and published. Here's hoping, as I believe it turned out to be an effective, rather eerie ghost story. I finished it just a couple of weeks ago, anticipating visiting the actual location again.

Following the gorgeous gorge hike — in unseasonable, disagreeable 80-degree temperatures — we returned to the cabin and spent a leisurely afternoon on the premises, me banging on me guitar, Kim working on some pen-and-ink and watercolor renderings until the sun went down, when we built ourselves a blazing hot campfire (also made damn near disagreeable by the ugly temps of the day) and roasted hot dogs and marshmallows — mind you, just to add a few extra calories after having been so drained of these things by our strenuous hike. To help bring us back into the Halloween spirit, for our evening viewing we put on It's the Great Pumpkin, Charlie Brown and Guillermo Del Toro's The Orphanage, which neither of us had seen. While the latter film wasn't particularly scary, it was quite well done and possessed of eerie overtones that qualified it as a decent choice for Halloween viewing.

I might mention here that, as with past visits to Stonewall, we have been advised to make noise when on the trail hiking to and from the cabin, as bears are sometimes known to frequent the area. Well, true to our established form, we warned potential interlopers of our presence by occasionally hollering "Bear!", which for the most part seemed to keep them away. I did see one bear hanging around yesterday afternoon, though. He was very small, gray, with a fuzzy tail, and appeared to be enjoying himself leaping from tree to tree, but since he never really bothered us, I didn't begrudge him his fun. Now, sometime during last night, Kim rolled over and her toenails bit into my leg, at which point I sat up and yelled "Bear!", figuring it was the only sensible thing to do. As you may infer, the View Cabin, as nice as it may be, doesn't come without its unique dangers.

This morning, Scott outdid himself with breakfast — eggs, bacon, bacon & broccoli quiche, pancakes, apple cobbler, more orange juice and coffee. Sadly, it was that time again, to pack up and head back to Greensboro. Coming home, I satisfied myself with hunting a single cache on the aptly named Goblintown Creek Road, though the cache itself was not particularly scary. Unless to you birdhouses are scary, and then it would be quite the fright.

Our Halloween retreat for another year is ended, though there's still another day before actual big event. I will be celebrating hard tonight, working in as many scary things as I can before it's all over and done with. Be afraid, my friends; be slightly afraid.

And don't forget to yell "Bear!"