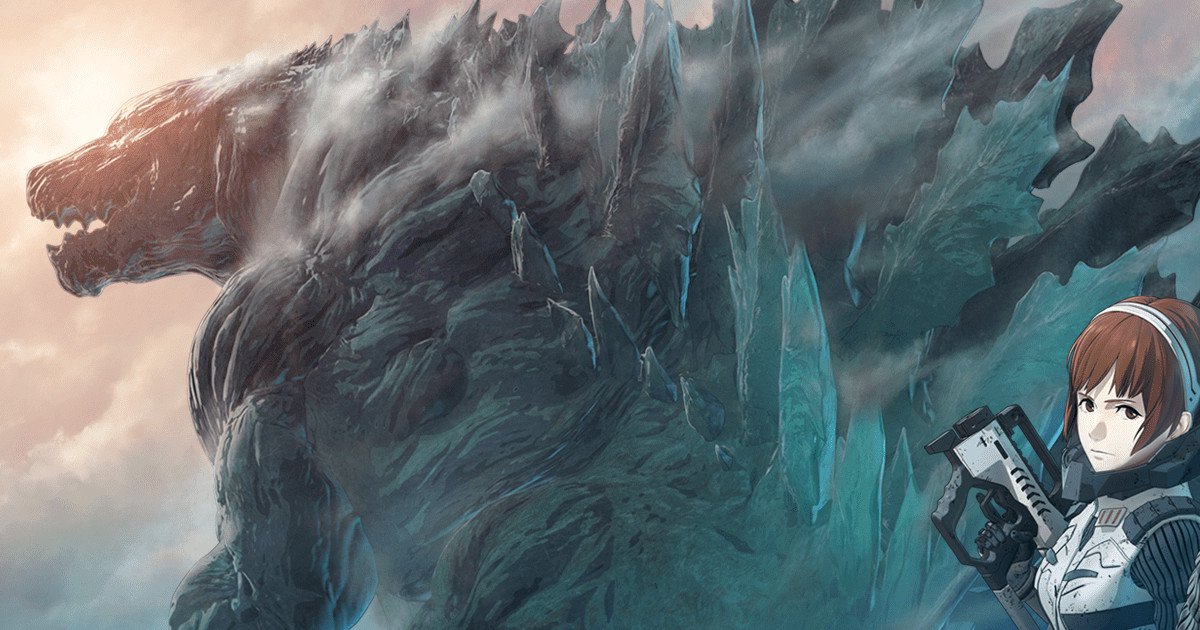 For decades, GODZILLA and other daikaiju have ravaged the earth. In the year 2048, the surviving members of the human race—along with members of two alien races that had also attempted to battle Godzilla—take to outer space to search for a suitable new home. For twenty years, their interstellar vessel, the Aratrum, has searched unsuccessfully for a habitable planet, and having exhausted supplies and morale, the crew make the fateful decision to return to Earth and attempt once again to battle Godzilla for domination of the planet.

Shortly after the release of Shin Godzilla (a.k.a. Godzilla Resurgence) in 2016, Toho Co. Ltd. announced their plans to make an anime version of Godzilla, to be animated by Polygon Pictures, written by novelist/anime screenwriter Gen Orubuchi, directed by Kobun Shizuno (the Detective Conan series) and Hiroyuki Seshita (Symbol, Blame, Knights of Sedonia), and featuring a musical score by veteran anime/Godzilla film composer Takayuki Hattori (Godzilla vs. Space Godzilla, Godzilla 2000). In March 2017, Toho announced that the new film, titled Godzilla: Planet of the Monsters, would be the first part of a trilogy and, in November 2017, released it to theaters in Japan. It made a relatively strong showing at the box office and was thus slated for worldwide release on Netflix on January 17, 2018.

Being one of the planet's most enthusiastic daikaiju (and, at one time, anime) freaks, since I became aware of Godzilla: Planet of the Monsters, however many moons ago, I figured I could be persuaded to actually give this one a look, maybe even without the promise of excessive wine. Now, my initial reactions to the trailers I watched and the synopses I read were none too positive, but I figured I could remain guardedly optimistic. Today being the release date, and being snowbound at home, I judged it the perfect time to give the film a look. And so I did. 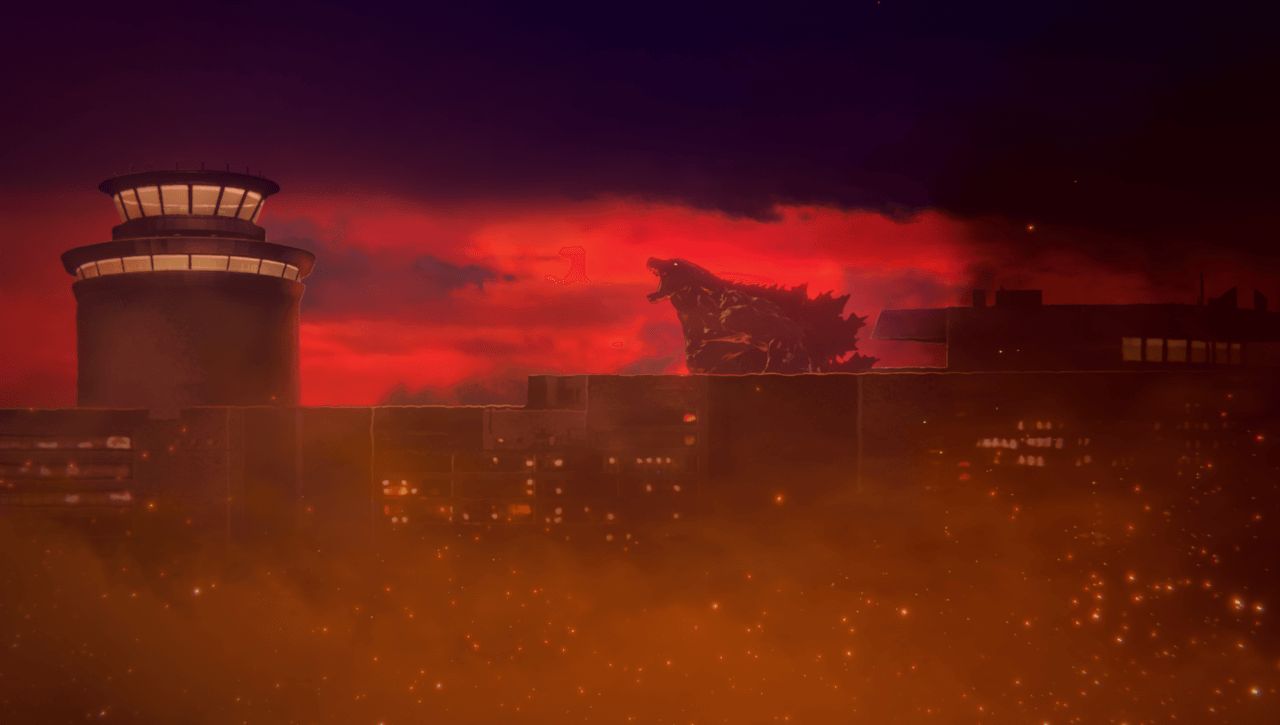 Was it worth it?
Why, yes. Yes, indeed. That said, it was far, far from perfect, but on the whole, it was an enjoyable Godzilla experience. I cannot say I'm overly fond of the Godzilla design—it's cloned from the 2014 Legendary Godzilla, which is better than, say, the Godzilla vs. Megalon or Son of Godzilla Godzilla, but it remains, in my book, anything but the most desirable (I could spend way too much time on this individual topic). All things considered, I was far more taken with Toho's Shin Godzilla design, which is essentially a variant of the original 1954 Godzilla maquette on steroids. Still, in the context of the film, this Godzilla presents itself as a massive elemental force, which, at the end of the day, is a fine way for Godzilla to be presented.

Prior to viewing the film, I felt some skepticism regarding the storyline, what little I knew of it. Since I had intentionally avoided learning any plot details, my only real knowledge of it was that the film's events would take place on Earth 20,000 years in the future—which, for at least partially subjective reasons, didn't sit right with me as, too often, such a significant distance in time results in diminished relatability to people, places, and things in a story. However, the plot, as it unfolded, followed a strong, agreeable internal logic and, over the film's running time, allayed most of my fears regarding its setting. I'll also mention that the character drama being at the forefront, with a long absence on the part of the title monster, began to worry me a bit because the character drama never hit on all cylinders (in fact, at times, quite the opposite). However, when Godzilla did make its appearance, it ended up being worth the wait. Some spectacular, tension-filled moments ensued during the man-v-monster confrontation, and it was here, in that last third, that the movie all came together. 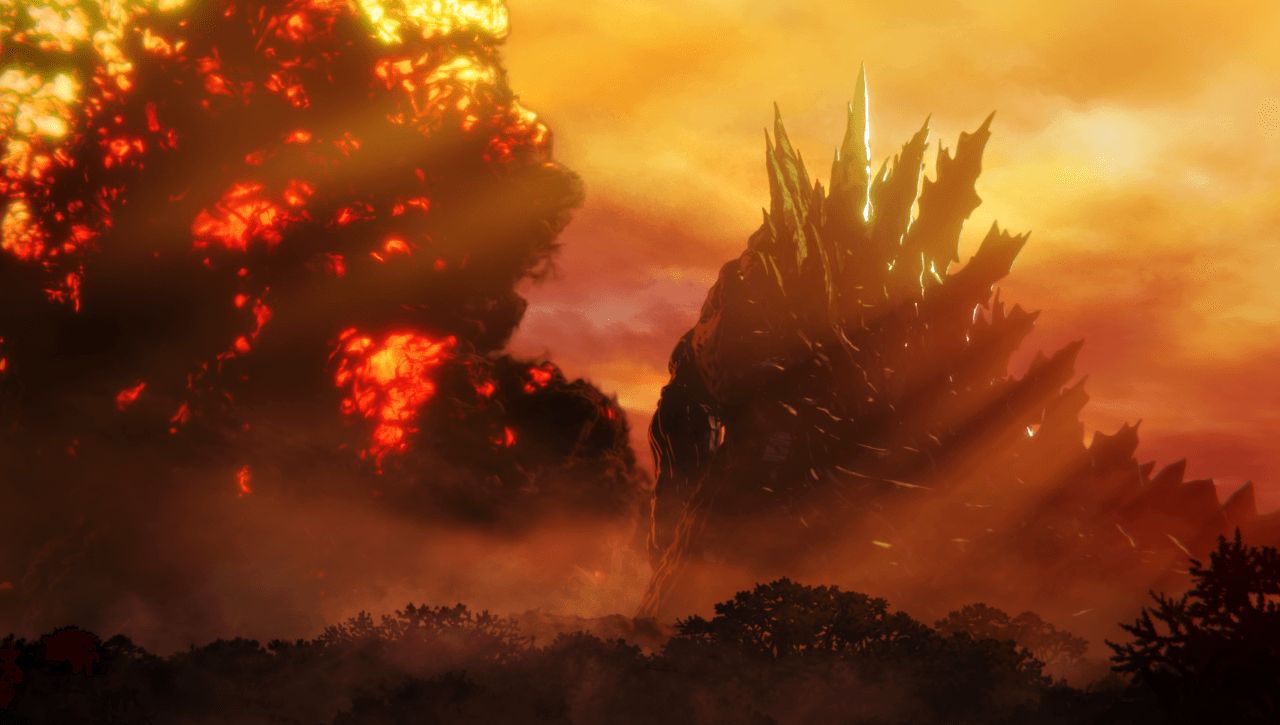 "Fantastic and Exciting!"
The film's CG animation is engaging from start to finish, featuring many of the hallmarks of classic anime along with many superb visuals—particularly in the outer space scenes—that put to shame the CGI in any number of big-budget live-action movies. Given the high achievement of sheer audio-visual spectacle in this film, there's no question that Godzilla can and does work as an animated entity—and I say this as one of the world's foremost proponents of "suit-a-mation," the traditional man-in-suit method of bringing Godzilla to life since its first film in 1954.

The film's mecha is classic anime, with hardware designs that hearken back to Macross, Mobile Suit Gundam, Orguss, Dougram, and countless other anime series from the 1980s and beyond. Most notably, the film pays more than the usual attention to physics, at least cinematic physics, which adds some sense of believability absent from too many SF spectacle films—Godzilla films not the least of them. From the design and execution of the space vehicles, to scenes of combat aerobatics, to the convincing conveyance of scale of Godzilla and the other monsters, the film excels.

Takayuki Hattori's musical score, while reasonably effective scene-by-scene, is unmemorable, a charge frequently leveled against his prior two Godzilla scores, though I find those on the upper side of satisfactory. Perhaps another listen to this soundtrack might give me a little more to chew on, but virtually nothing about the score stood out as exemplary during my first viewing. 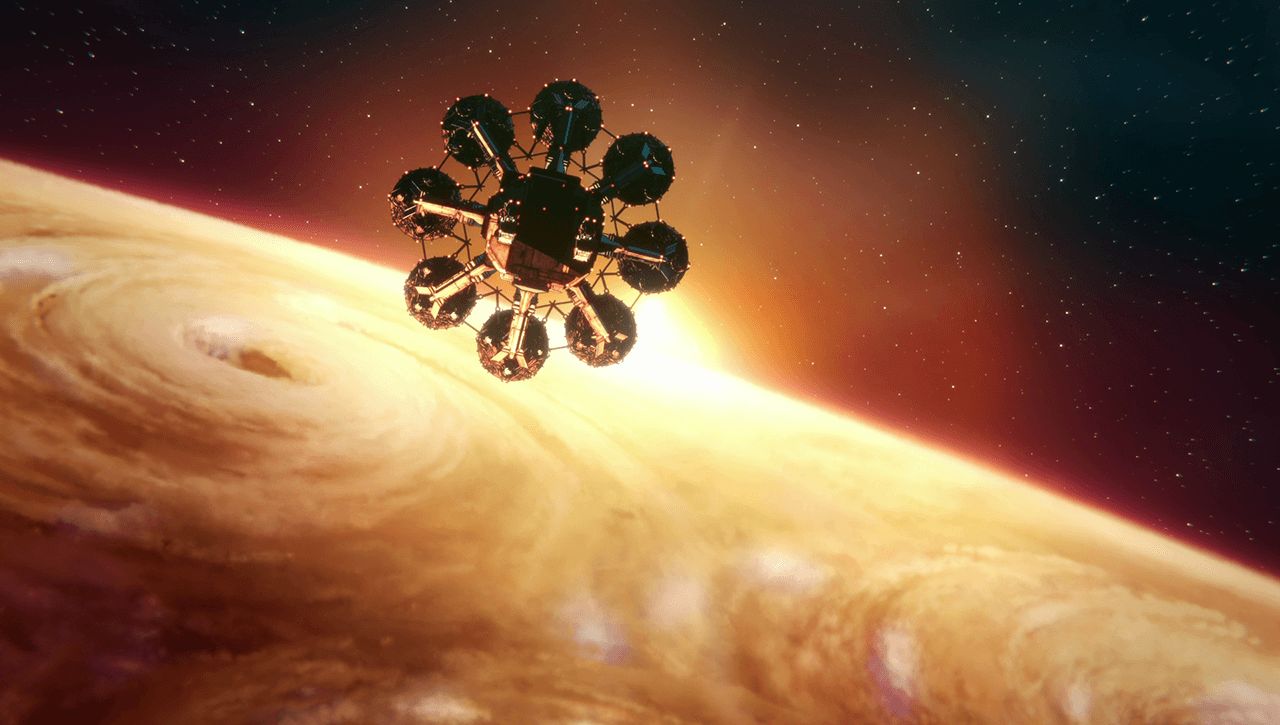 Shut the Fuck Up, Already
As I have insinuated, the film's most serious shortcoming is its reliance on character drama for the first half to two-thirds of its running time. While there are, without doubt, some tense, engaging moments, the focus on protagonist Haruo Sakaki, a young military officer who lost his family to Godzilla in his childhood, could hardly be more tedious (one more "I'll kill you, you bastaaaaaaaaard!", screamed at Godzilla with all kinds of melodramatic venom, and I'd have probably shut off the film). Now, toward the end, some of the focus on Sakaki finally pays off, but prior to that, the overwrought portrayal of his personal grudge against Godzilla reaches the point of ridiculousness. Toho has presented such a character, played much, much better, with Admiral Tachibana in Godzilla - Mothra - King Ghidorah: Giant Monsters All-Out Attack (a.k.a. GMK, 2001). In Tachibana's case, his rage at the monster is tempered by thoughtfulness, wisdom, and excellent, understated acting; in contrast, Sakaki, portrayed as youthful, reckless, and outspoken, is nothing more than a trope, and as such, his desire for personal retribution never rings true. 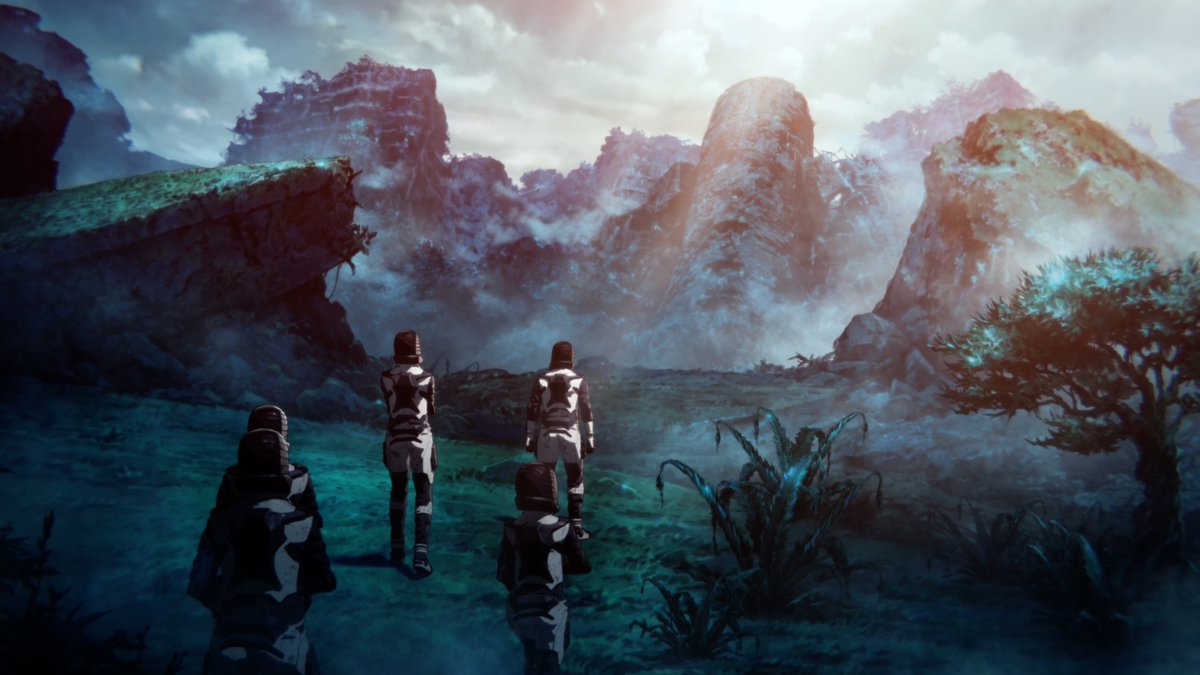 What's Next?
Later in 2018, we should expect to see the second part of the trilogy: Gojira: Kessen Kidō Zōshoku Toshi, which, from what I have read, may be translated as something like Godzilla: The City Mechanized for the Final Battle, and is reputed to feature Mechagodzilla, an incarnation of which is briefly shown in this film.

So, all things considered, I'm going to give Godzilla: Planet of the Monsters an overall rating of very good, with caveats. I'll no doubt watch it a time or two prior to the release of its sequel(s) so I don't forget important details (I am old, and these things happen). And I think you should watch it too, whether you're a diehard daikaiju fan or just a casual viewer of things exciting and impressive.

A solid four out of five Damned Rodan's Dirty Firetinis. 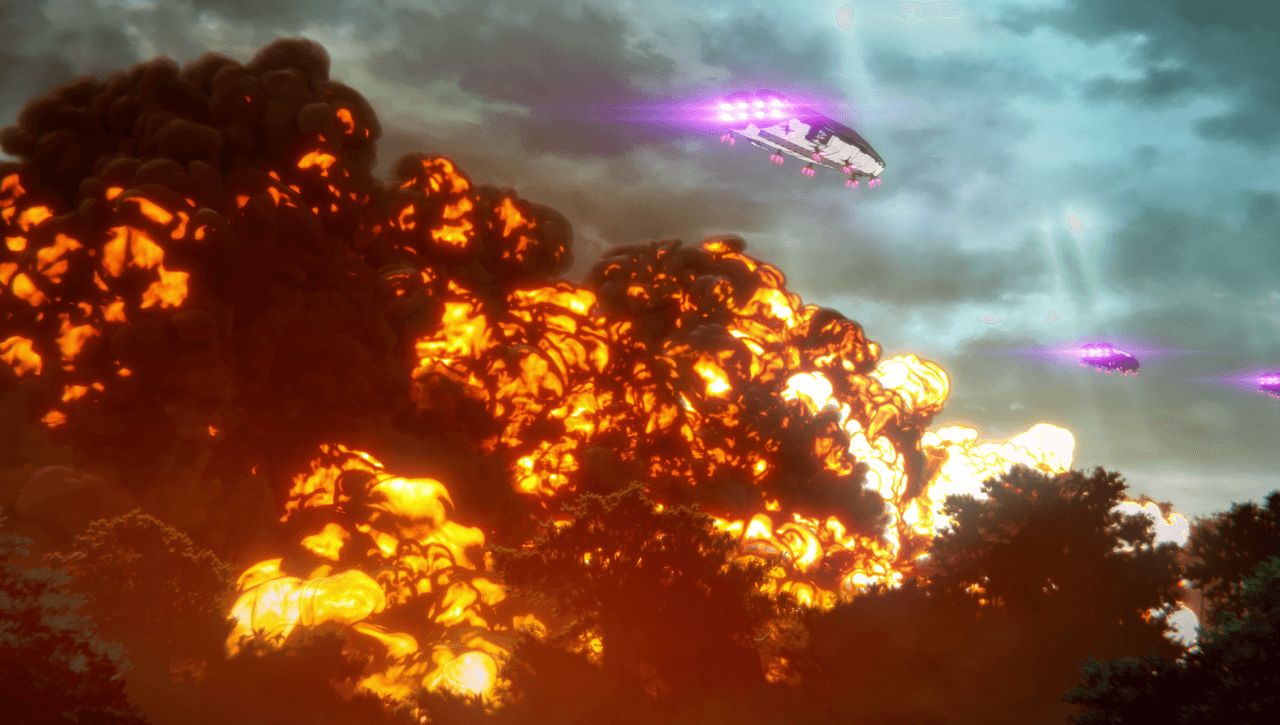 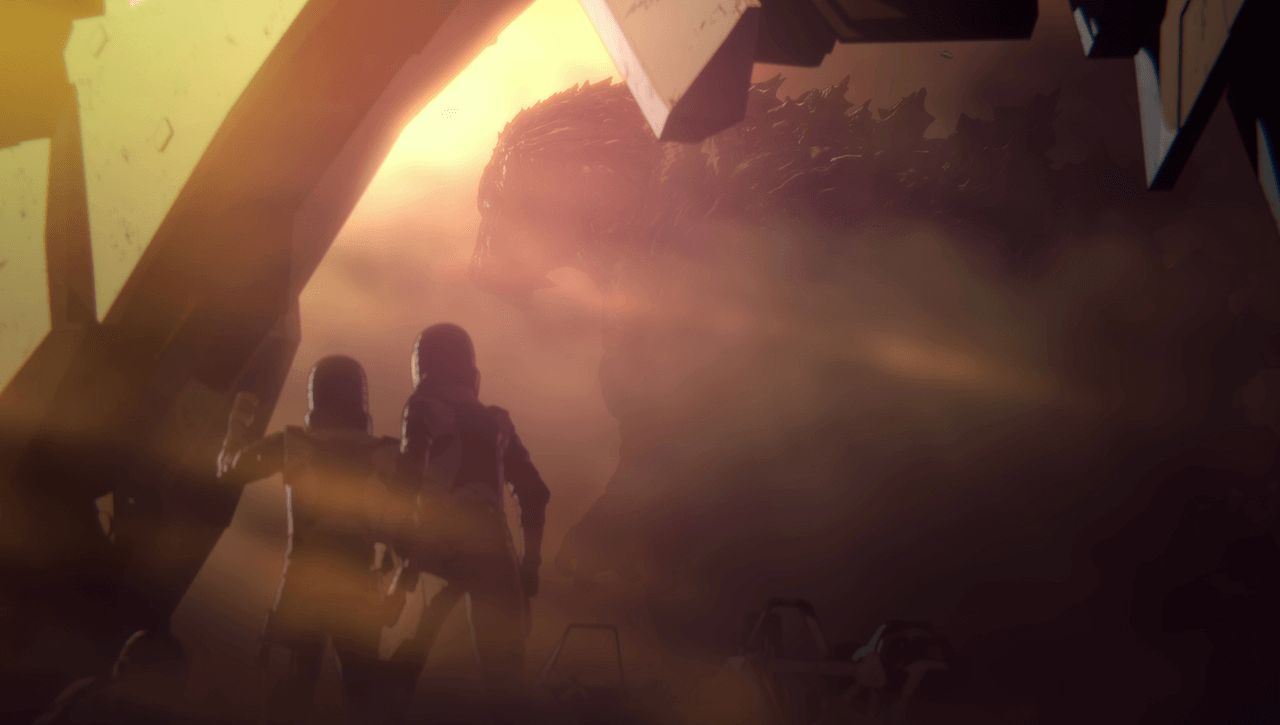 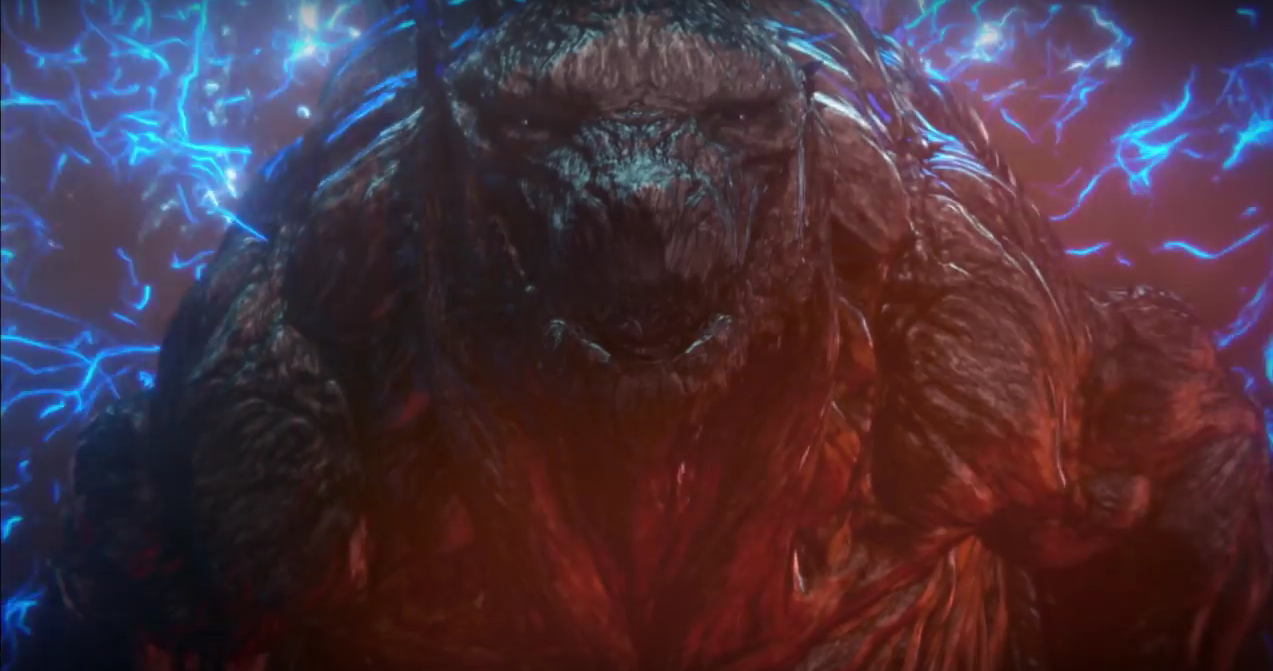