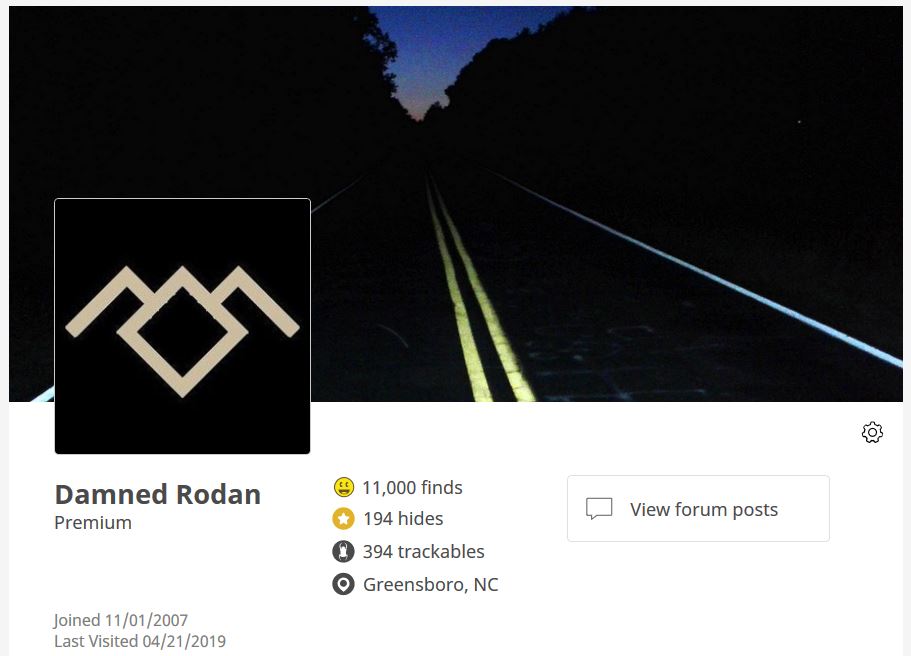 Just over eleven years after I started geocaching, I found my 11,000th geocache — yesterday, on the American Tobacco Trail, south of Durham, NC. I didn't make any special plans for this particular milestone, as I have for others. Last year, for my 10,000th, Ms. B. and I made a ten-mile round-trip hike to McAfee Knob near Roanoke, VA (see "Ten Years, Ten-Thousand Geocaches"). In past years, for various milestone caches, I've gone deep underground, paddled many miles in a kayak, and gone up great big trees. Really, it is kind of a pain in the tail to try to plan for a specific milestone on a specific date. Eleven thousand is a nice number, but this didn't seem worth the hassle of all that planning. So, since a bunch of us had previously decided to hit the ATT on Sunday, I figured that whichever cache I found for 11K was all fine with me.

It was a crowd of the usual suspects that headed to Durham on Easter Sunday morning. Cupdaisy (a.k.a. Shoffner), Diefenbaker (a.k.a. Scott), Fishdownthestair (a.k.a. Natalie), Robgso (a.k.a. Old Rob) set out bright and early for the trail. Our group, whoever among us it happens to be, usually adopts a team name, and for this one, in honor of Easter, I suggested Team Walking Dead. Alas, I was outvoted in favor of Team Easter Bunny. It wasn't until we'd hopped a fair distance and grabbed several caches that I even figured out which one was actually 11K. Turns out it was a nice little hide called "Biscuit Got a Rock" (GCXK5W), hidden by friend NCBiscuit (a.k.a. Linda). We ended up snagging 14 caches on a 7-mile hike, and we had designs for a few more, until....

A friend of my mom's called to tell me he and his family had taken her to church and lunch, but she had locked herself out of her house. She had keys, but they didn't seem to work. So, being the caregiver of note, I ended up having to head up to Martinsville, pick up Mum from her friends', and get her back into her house. The kicker was that her key actually worked — the door, being swollen from humidity, appears to have been a sticky bastard, giving the impression that it wouldn't unlock. It just took a little extra futzing. So, it was a long trip up and back that wasn't really necessary, all the more frustrating since I had just been there on Friday and Saturday. Sigh. But in any event, all is well that ends well, Mum is happily ensconced in her house, and I have 11,000 caches under my belt.

I hereby hope for a calamity-free week, as there have been more than the customary share of calamities in recent days. So calm it the fuck down, all right? Would ya? Thx.
Posted by Stephen Mark Rainey at 9:32 PM