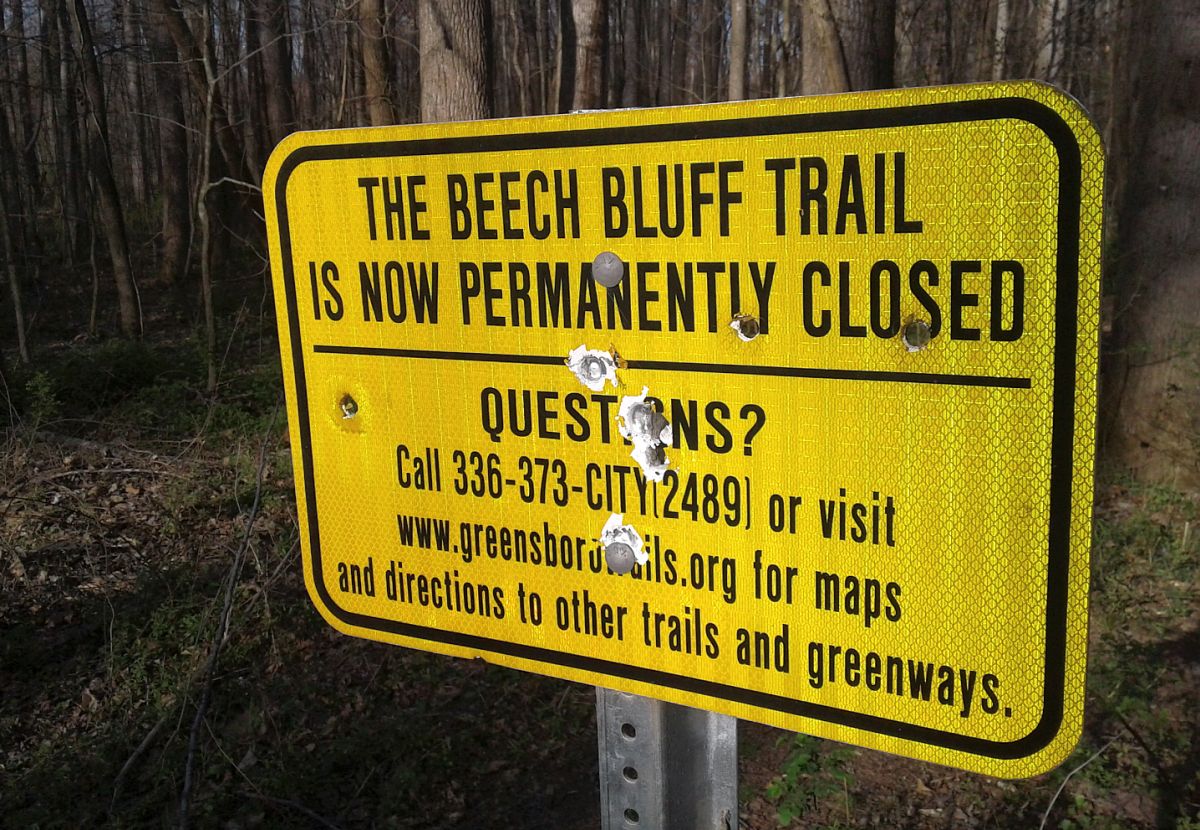 This trail closing makes me sad because a couple of my favorite geocache hides were along this trail: "Let's Rock" (GC5W99P — a Twin Peaks–themed cache) and "Chasm of Horror" (GC4WA59 —  one of my most physically challenging, death-defying hides), which I placed about five years ago. Of the numerous Greensboro watershed trails, the Beech Bluff Trail and the nearby Bald Eagle Trail (which, thankfully, is still open) are farthest away from my place, so it's been pretty rare for me to get out there; still, there have been numerous cache hides in that area over the years that I really, really enjoyed. "Chasm of Horror," in particular, was a favorite because, in order to get to it, you had to go pretty far out on a precarious, fallen tree over a 20-foot-deep gorge and then reach up to snag a little bison tube hanging from a limb of a nearby standing tree. When I hid the cache in 2014, it gave me a case of the heebie-jeebies, and when I retrieved the container today, it gave me another case of the heebie-jeebies. Most agreeable, I've gotta tell you.

So sad to think I will likely never visit that place again in this life. From the looks of things, other people were sad about it too, since they wasted no time getting out there to pelt the "trail closed" sign with bullets.

Some on social media have suggested putting together a geocaching gathering to help restore the trail, a GoFundMe drive, an Eagle Scout project... all kinds of things that sound really good but that, in reality, most likely will not fly. While I am indeed passionate about geocaching, hiking, and supporting all kinds of outdoors activities, there are battles to pick, and I fear this simply isn't one of them — at least, not until I come into my millions, and I won't be coming into my millions unless I really bust ass in other of life's endeavors. Frankly, I more than a little suspect that some fucking developer has its eye on this sizable parcel of land, since, in Greensboro, it is verboten for trees to grow when a bunch of god-awful dwelling places on clear-cut land can be planted in their places.

One thing is for certain: while I have generally supported bonds to fund Greensboro's Parks & Recreation Department, I will no longer do so — not after the wholesale destruction of woods and trails in favor of damn near uncountable new soccer fields at local parks that can never, ever possibly be fully utilized in this town. There are, what, 33 or so fields at Bryan Park now, just up the way? It was one of these fucking superfluous fields that took out "Darkness Falls" (GC14WGB) a while back. "Darkness Falls" was a classic night cache put together by Darth Sketcher in those days before I even knew the activity existed. In 2014, after Sketcher had retired from geocaching, I adopted the cache and spent no little time, energy, and expense refurbishing it (see "Restoring Darkness Falls," "Darkness Falls Restored," and "Darkness Falls, Cache On" for some insight on that one).

To reach the "Let's Rock" cache, you had to listen to a recording of the Little Man From Another Place giving you the coordinates. For old times' sake, here's the audo: Let's Rock Coordinates

There's nothing there now but a bunch of empty woods. I will say, if the woods do remain unsullied, and the critters take it over without human intervention, I'm all for this. But given Greensboro's track record with woodlands, I'm cynical. No. I'm beyond cynical. So for now, I'll just indulge in a little sad. At least, for time, the Beech Bluff Trail brought me, and I know a lot of other people, quite a bit of joy.