Whinin' and Cachin' in Midland 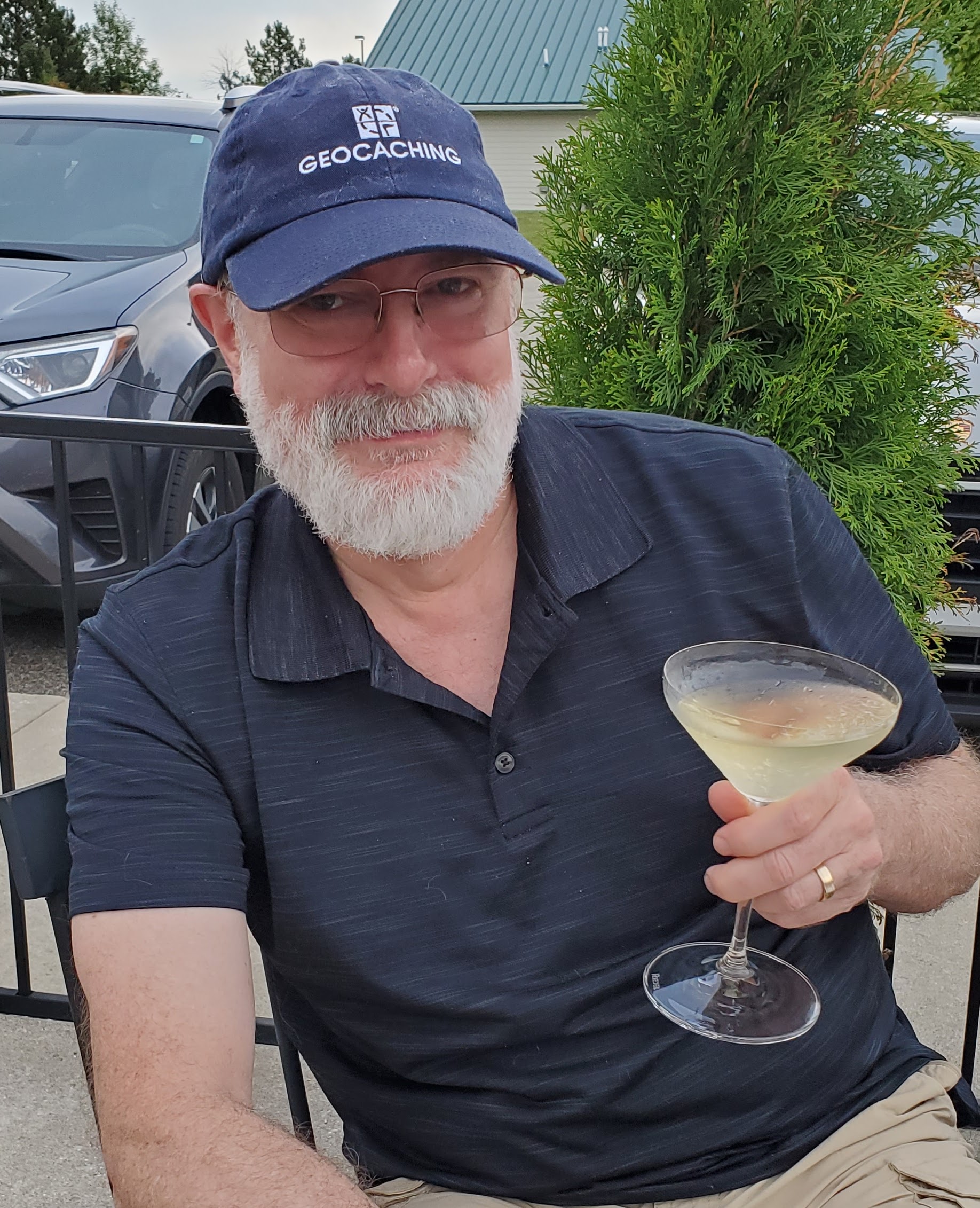 It was the first plane ride for Ms. B. and me since before the pandemic began. We were a couple of early birds on Thursday, September 2 — our flight took off at 5:10 a.m., so we were up and at it by 3:30 a.m. Fortunately, from start to finish, everyone around us was masked up, as required, and of course, Ms. B. and I had our COVID-19 shots a few months back (as did her parents). We headed from Greensboro to Flint via Charlotte, on full flights, both of which were on time, smooth, and trouble-free.
We arrived in Midland, MI, early in the afternoon, had some lunch, drank coffee, and spent a good portion of the afternoon hanging with the parents. Rather than go out geocaching, I stayed in and worked hard to complete a short story for an upcoming anthology. Mission accomplished! I feel like the story did everything it set out to do, and I hope the editor will feel the same. Of course, I will post any news on that front whenever there is any news on that front to post. Despite having gotten up well before the ass-crack of dawn, we both stayed up to the wee hours watching cooking shows on the Food Network, which has become long-standing tradition whenever we're in Midland.
Friday turned out to be quite a productive day, geocaching-wise. I got up early and, as has been my custom on the past several visits here, set out on the bicycle for big ol' caching run. I found a fair bunch, couldn't find a couple of others, and put in seven or eight miles of pedaling.


Drank coffee.
After lunch, the lot of us hit the road, headed for Clare, about 30 miles from Midland, so that Ms. B. and her folks could explore an antique shop or two. Naturally, while they did this, I wandered off to hunt caches. I discovered Clare's very large, very old graveyard, which was quite lovely — one of those graveyards so picturesque they surely take some of the sting out of being buried. We had intended to stop at the famous Cops 'n' Doughnuts doughnut shop, but it — like most of the rest of the little town — was overrun with specimens of the human species, a huge number of which were stopping through on their journeys north to the annual Labor Day walk across the Mackinac Bridge, which connects Michigan's upper and lower peninsulas. So we opted to forgo doughnuts (though I did get to snag a cache there). Once our business was concluded in Clare, we moved a few miles back eastward to Sanford, a tiny little town that damn near came to an end a year or so ago. An incredible amount of rainfall swelled the Titabawasee River to unprecedented proportions, which resulted in the destruction of two dams and massive flooding in and around Sanford. When we visited here last September, we went to Sanford to view the damage (see "Midland with a Twist," September 18, 2020). Since then, most of the town has been as restored as restored can be, but the river and Sanford Lake are just plain gone, with only marsh and destroyed property remaining in their places. The folks found a decent antique mall north of town, while I again set out on an enjoyable cache run.
After a nice dinner with the folks, Ms. B. and I made the pilgrimage to Whine!, which is pretty much our regular Midland wine bar — though, rather than wine, I decided to give their gin martini a try. I found it pleasing. And, as per usual, upon our return we sat up late with the folks watching cooking shows. I always wonder why I feel so hungry when I'm here.
Another lengthy bike ride was on Saturday's morning menu, which netted only a small number of caches but quite a few miles of pedaling. Ms. B. and I had a craving for burgers, so we decided to try a particular establishment of some renown in the downtown district. It turned out to be closed due to liquor violations (serving the intoxicated, according to their sign). We decided to try another one nearby, and that one was closing the kitchen at 1:00 p.m. for the Labor Day weekend (we arrived at 1:01 p.m.). Sigh. So, onward, and we finally ended up at Big E's Sports Grill, which reputedly offers some of Midland's best burgers. Now, the Screamin' Demon burger probably wasn't the "best" of Midland's burger offerings, but it was decent, and I quite liked the fries. I also discovered a locally brewed Hefeweizen that was nothing to sneeze at.

Drank coffee.
For dinner, Kimberly and I constructed shrimp tacos, which everyone enjoyed. And then it was a quiet, homebody-type evening in front of the TV.
Another relatively early-morning bike ride got Sunday started for the old geocacher. This one turned out to be another long ride with few cache finds, but I did get to spend some quality time on the hunt. One — at a picnic shelter at Optimist Park — was rated high on the difficulty scale, and I never did find the damned thing after almost an hour of searching. I'm sure that little fucker is there; it's just a really tough hide. I got in a bit of trail riding at nearby Stratford Woods Park, and at least there, I did find the cache. Drank coffee.
After this, Ms. B. and I headed downtown, where we completed an Adventure Lab cache that led us to several noteworthy locations along Main Street. That was fun, and I also picked up an additional cache along the way. During the afternoon, she and her folks went out to hunt more antiques, while I stayed home to rest and recuperate after all the rigorous pedaling. And I got a bunch of this blog written.
Drank more coffee.
Come dinnertime, we decided to hit a couple of different downtown destinations to split up the courses. We began at Café Zinc — out on the lovely terrace — with a dirty gin martini for the old dude (which would have been exemplary but for the non-regulation martini glass, which sits poorly with certain of us drink snobs), a not-at-all-oaky Chardonnay for the lady (feh), and a shrimp cocktail to share (bravissimo). We followed this by trucking ourselves a couple of doors down to Gratzi, which we had visited once before, a couple of years back. On that experience, the food left more than a little to be desired, though the drinks were perfection and the service exemplary. This time, I ordered the veal Bolognese, and Kimberly went with meatballs with marinara sauce. Hers was delicious, mine was good, though not exceptional. As before, the service couldn't have been better and the atmosphere there is top-notch. For these, we'll give the place a solid thumbs-up.
And Monday — Labor Day — began in customary fashion: one of Fern's fabulous breakfasts (this morning, pancakes and bacon), loads of coffee, and then out on the bicycle for the last long geocaching ride of this Midland trip. I again got in seven or eight miles and snagged another eight caches, mostly none too challenging. I gave the picnic shelter at Optimist Park another intensive search, and still didn't find that confounded cache. Since it was taking so much time and effort, I finally broke down and requested some intel from a previous finder, who led me to believe that the cache is, in fact, missing. I won't know for sure this trip, but maybe I'll get another shot at it on a future visit.
And that was our long Labor Day weekend Midland trip. Mostly relaxing, with fun caching, bike riding, dining, drinking, and wonderful family time. Drank coffee. The weather was absolutely perfect this time around; I sort of suspect that, on our next trip, it may be cold. Damned cold. Michigan cold.
Till then.