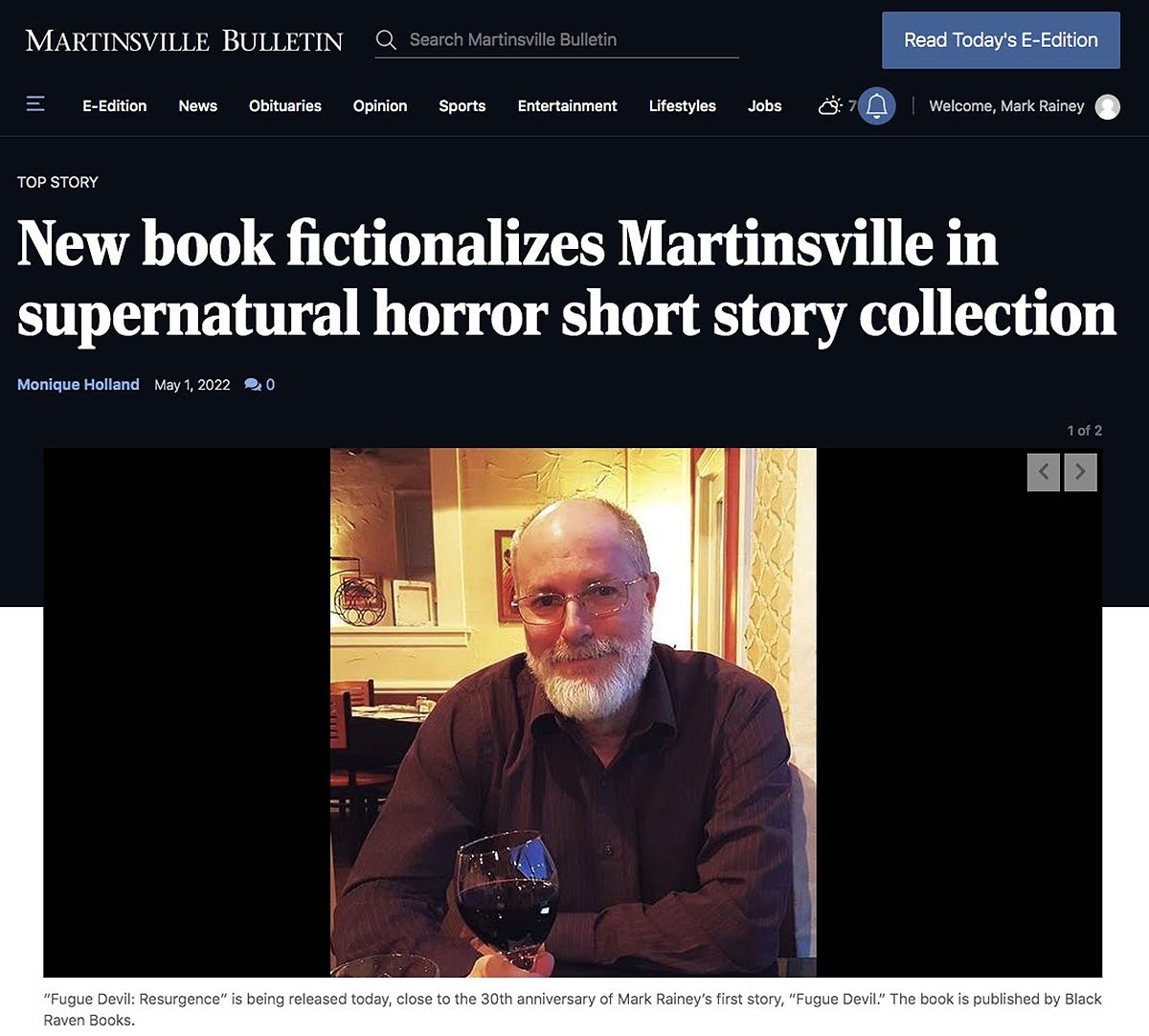 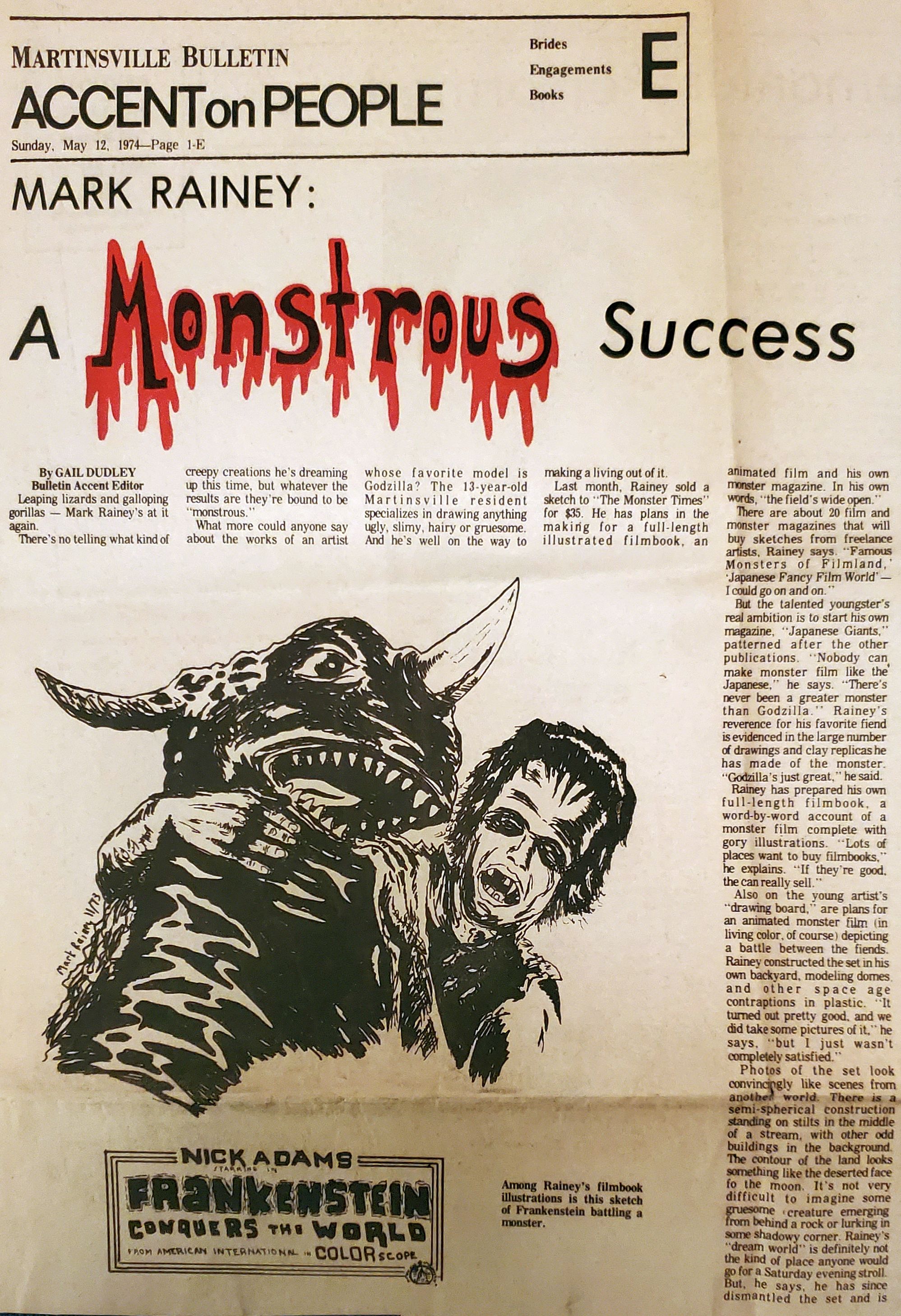 In May 1974, my hometown newspaper, The Martinsville Bulletin, ran a profile about me and my affinity for monsters and other scary things. At the time, I had sold what was to be my first published “story” — actually a filmbook of Godzilla vs. the Thing — to The Monster Times, and the first issue of my fanzine, Japanese Giants, was in the planning stages. The article, by writer Gail Dudley, was later picked up by the Associated Press and published in newspapers all over the US. How fun was that?
Over the years, I’ve maintained a lot of connections with my old hometown, including having notices appear in the Bulletin somewhat regularly, particularly when I have writing news to share. A couple of weeks back, in the Sunday edition — almost exactly 48 years after that first article — the Bulletin ran a nice profile written by Monique Holland, who came out to interview Samaire Wynne and me about Fugue Devil: Resurgence, now in release by Ms. Wynne’s Black Raven Books imprint. You can check out the article here: “New Book Fictionalizes Martinsville in Supernatural Horror Short  Story Collection”
Now, I’ve never had a single profile run in any newspaper that got all the facts right; some have been fairly egregious, others have been mere quibbles. Fortunately, Ms. Holland did a nice job overall, though the gaffes, unfortunately, involve Ms. Wynne’s statements more than my own. The online version, linked above, at least does not call me “Marky,” as the print/digital version does (see below). This, I’m pretty sure, was not Ms. Holland’s fault. 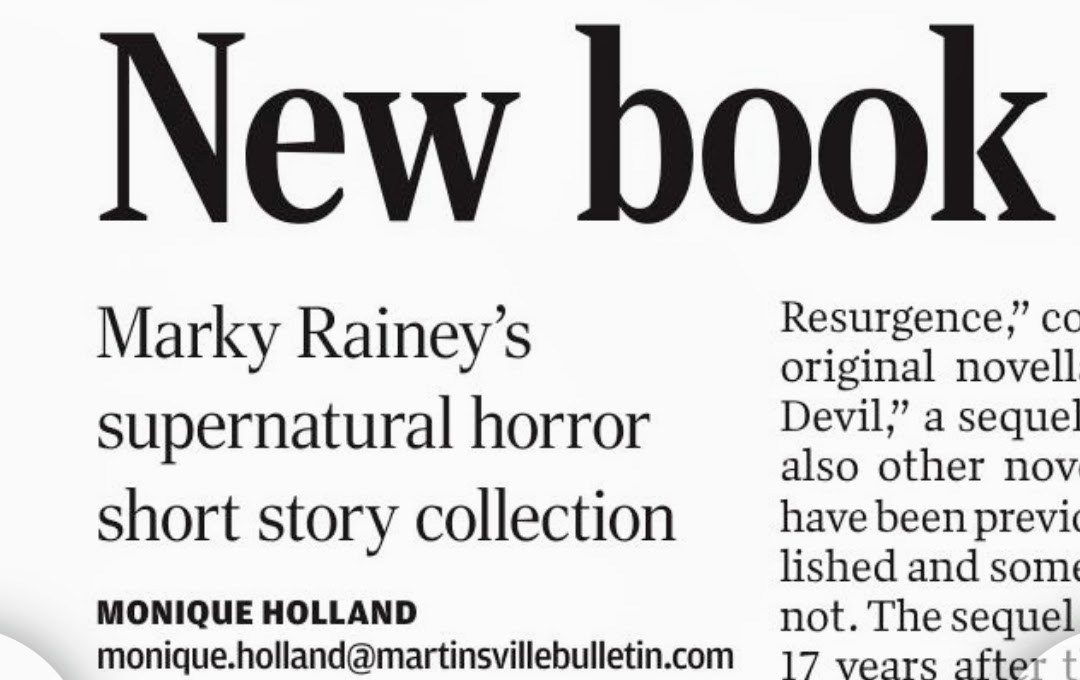 (As a complete aside, back in my Chicago days, 1983–1987, several of the young women in my department at the office took great pleasure in calling me “Marky Stevie,” and I can’t help but wonder if they somehow channeled this epithet to a copy editor at the Bulletin. I wonder this simply because I know for a fact that these maybe-no-longer-quite-so-young women still take great pleasure in giving me good-natured shit. I’ve been known to return the favor.)
It is fair to say that copy editing has never been the Bulletin’s forte. Back in the early 2000s, when my books The Last Trumpet and Balak came out, I did a signing at one of Martinsville’s bookstores. The Bulletin’s headline read, “Local Author to Sign Cooks on Saturday.” After that one, I sent a little cartoon with a caricature of me brandishing a pen and chasing a terrified-looking chef, but the paper didn’t run it.
Note: The Bulletin allows readers a handful of free articles before asking you to pay, so you can probably access the link with no paywall. Also note: Do not look for cooks in the current article. You won’t find any. 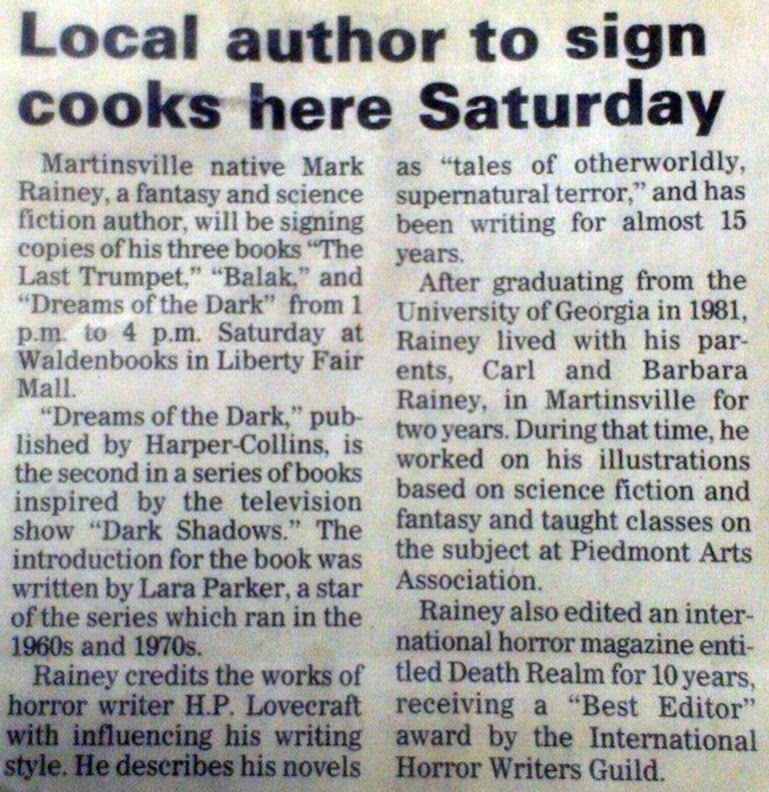