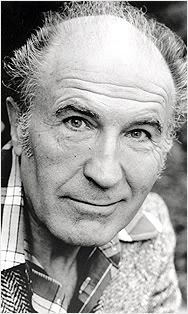 If you were ever a fan of Space: 1999 back in those glorious '70s, you no doubt remember Barry Morse, who played the stern but kindly Prof. Victor Bergman. Or going back further, in The Fugitive television series, he won his fame playing detective Philip Gerard, always hot on the trail of David Janssen's Richard Kimble. Morse actually appeared in hundreds of television, movie, and stage productions, including The Twilight Zone (both the original and revival shows), The Changeling, The Winds of War, War and Remembrance, The FBI, The Invaders, and plenty more. In fact, one source estimates he played over 3,000 roles in his long and steady career since 1942.

Barry Morse passed away on February 2, at the age 89. He had lived in his own home up until three days before he died. For many years, I felt that, apart from my brother, I was about the only soul in the world who even knew his name. I'm so glad to have found in more recent years that he was actually known and highly regarded by a fair legion of fans and admirers.

Way back in the 70s (again), my grandparents had a friend who looked remarkably like Mr. Morse. In fact, if you put the two in the same room, you might be hard pressed to tell which was the real Prof. Bergman. Whenever we'd see this gentleman, my brother and I would holler, "Barrrryyyy!" and the old fellow would always look a bit flumoxed.

Leave it to us young 'uns.

Barry's moved on to the brighter lights, but he is missed. Godspeed, good sir.
Posted by Stephen Mark Rainey at 10:58 PM