There Shall Be No Deathrealm 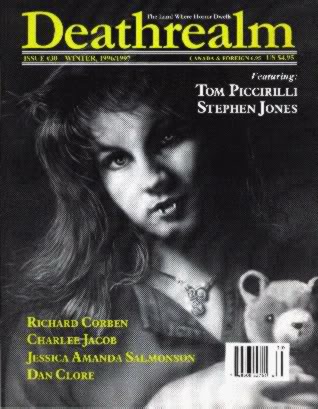 I keep having these dreams that I'm editing Deathrealm again, and things keep going horribly wrong. I've just sent an issue to press, and the printer informs me his rates have tripled. The cover art comes late and it's all wrong, so I have to replace it with a lolcat. The layouts get misdirected to China and they print the issue in Chinese.

Since I work in the publishing business by day and have all these wonderful resources at my disposal that, if they were my own, could make Deathrealm such a very smashing thing, I guess it's only natural that some deep, dark part of my brain likes to fantasize about resurrecting the old beast. Not to mention the fact that for the last couple of years, I've been getting subtle and not-so-subtle hints from the world at large that it would be soooo nice if Deathrealm were to come back. Sometimes I almost believe it.

Then I have these dreams, and I realize that the situations in these nightmares are child's play. Back in its day, getting the real thing done was a big, frustrating, fatiguing, and expensive job, and nowadays, it would be all that and more. So in spite of how gratifying it would be to be at Deathrealm's helm again, I'm going to let the old bugger remain at rest.

Of course, if someone were to lob a hundred grand at me, we might could talk, but somehow I'm not really getting this vibe. Go figure.

Seriously, though, it's not HARDER now, it's easier. The world is electronic and small. It's no cheaper in print, to be certain, but there might even be a way to do it POD and only print as many of each new issue as were ordered...perfect bound...hmmmm (lol)

I have NOT thoughts like that myself. I don't even have bad dreams about The Tome...I save those for books coming out with upside down print or the cover art being skewed...none of which is my problem.

If I'm rambling it's because I'm at work, still not fully recovered, and I have no voice so I'm taking out my frog-like squeaking anxiety on the keyboard.....take THAT! and THAT!

The fact that it's technically easier is what keeps driving me back to this subject. It's more the changes in life over the last 20 years that make starting up again prohibitive. I don't think Peg would ever forgive me, for one thing. ;)

Yeah, I know. The crazy time and money I used to toss at The Tome would be ill-spent in this day and time...

Still you feel the claws reach out for you...