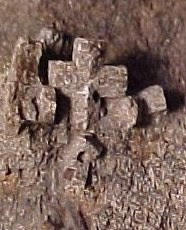 One of the neatest things about geocaching is that it takes Mrs Death and me to all kinds of places that we would otherwise never visit. In the last four months, I've seen more of Greensboro than I've seen in twenty-plus years, and I'm getting out frequently into the surrounding environs, which has given me a whole new appreciation for the picturesque quality of much of the local country.

Today, Mrs Death and our goodest friends, the Albaneses, made a nice day trip up to Fairystone Park, Virginia. In my younger days, I spent a fair amount of time at Fairystone, as there's a lake for swimming, a decent campground, and an impressive number of hiking trails. And nowadays, a bunch of geocaches. Of course, it was the caches that brought us back to the park.

Fairystones are crystals of staurolite, which often form the shape of a cross (see the photo above, which is from the Stone Cross Museum). They're absolutely everywhere around the park. While on the trail to one of the caches, we found what looked like a fairystone fountain—a mass of the stones deposited along the trail by recent rains. Legend has it that this area was once home to a gaggle of wood nymphs, and when they heard of Christ's crucifixion, they wept, their tears crystallizing into stone crosses. Yes, it's an odd one, but back in the olden days, it was among the locale's most prominent stories.

While we were on the trail (one of many we discovered), we came upon a couple of iron mines, which I had no idea existed. They're tucked back in the woods, dug into walls of slate, their entrances now blocked by iron trellises. Looking into them, you can see where the ceilings have caved in, and being out here among them gave me a lonely, almost creepy feeling. Back in the early 20th century, the area was a thriving town called Fayerdale, and mining was the primary industry. We, of course, were there mining for caches, which took some dedicated hunting, but we finally made the finds.

Discovering this little remnant of history, so close to where I grew up, is just one of those things in life I consider downright cool. As always, it gets the mind working toward some new, scary tale. And, of course, I added a few numbers to the tally of caches found.

She is a good and acceptable daughter. I owe her a dollar.
Posted by Stephen Mark Rainey at 10:34 PM