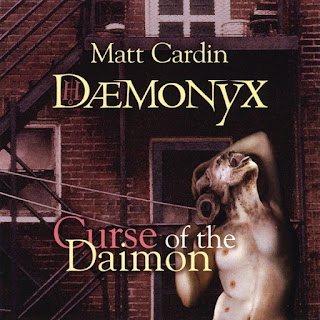 A couple of months back at Mo*Con, I picked up from Matt Cardin a five-track CD sampler from his Daemonyx: Curse of the Daimon album. I've listened to it quite a few times since then, but alas, I'm only now getting around to commenting on it.

This is electronica at its best. It's melodic with a distinctly dark edge; never just noisy but laden with pounding percussion, background sound effects, and voices speaking in ominous, hushed tones ("Is there someone inside you?" "Demons are taking over the world!"). The second track, "Daimonica," is probably my favorite, running about four and half minutes long, with a chiming melody somewhat reminiscent of the theme to Phantasm, and a layer of the aforementioned voices running behind the music through the entire track. Most of the lines are muted and difficult to understand, but certain key words occasionally come through—such as "the exalted flow of the time-space continuum"—and they draw your attention deep into the composition.

Track three, "The Face of the Deep," is a little harder edged, with what sounds like a genuine Hammond organ overlaying the repetitive rhythm about two-thirds of the way through the piece. Track four, "The Streets of Vastarien" (if you've read Thomas Ligotti, you'll recognize the title) has some of the distinctive, ethereal qualities of Angelo Badalamenti's Twin Peaks score, with deep, pulsing percussion in the background that's a bit unsettling.

There are a couple of free new tracks available at Matt's MySpace page; you can check them out here: www.myspace.com/daemonyx. If you're the least bit keen on mellow but dark electronica, this ought to delight you as much as it does me.

Yes, I want the whole thing. I gotta have it.
Posted by Stephen Mark Rainey at 5:09 PM