Adventures in the New Year 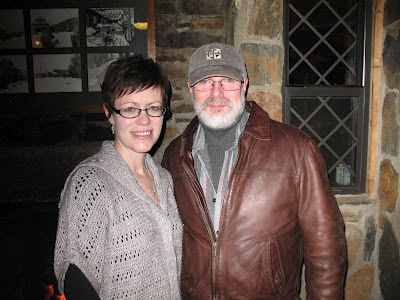 Or almost in the new year, as the case may be. Fit in a good many activities over the weekend (so far), a couple of which proved to be a bit on the hair-raising side. Headed to Martinsville with Ms. B. on Friday; needed to do some maintenance on a couple of my geocaches, so it was off to the trail we went. Getting to one of the hides, called Castle Rock, requires negotiating some pretty steep and rocky terrain. Well, Ms. B. should have read the cache description. It says, "Be careful. The hillside is rugged enough that you may be injured if you fall." Did we take note? Noooo. Fortunately, Ms. B. bounces, though she brings home an embarrassing contusion or two.

Next, we headed up to Chateau Morrisette, in Floyd County, for a nice New Year's Eve dinner. It's a beautiful setting in any season, but with the holiday decorations still up in profusion, it was especially appealing — and the food and wine brought on some serious hollering (of the good sort). Afterward, having set our sights on a geocache at a covered bridge farther out in the county, we hit the road, opting for the most direct route — which, as it turned out, became rather frightening. Initially, we encountered no snow, ice, or other hazards, and it seemed the drive would be a piece of cake. However, once we got pretty far along, conditions changed, and we suddenly found ourselves at a point of no-return: due to the narrow road and steep incline, there was no way to turn around and go back. Down the mountain we went, on a muddy, occasionally icy road, down hellishly steep straight-aways and around tight hairpin curves. At one point, when we broke free of the woods for a brief spell, we could see by the distant lights in the darkness just how high up we were. Suffice it to say, I made up my mind not dwell on the altitude; it would have been unhealthy. The GPS map was absolutely invaluable here, for I could see when the hairpins were coming up and get an idea of how far we had to go anywhere along the way. A hairy ride to say to the least, but thanks to God looking after fools and dedicated geocachers, we at long last made it to the covered bridge — and after an enjoyable nighttime hunt, we found the cache. From there, we made our way back to lower, flatter, and less harrowing altitudes.

Today, the weather turned surprisingly warm, so it was off to the Laurel Bluff Trail to hunt a new cache. The trail was still a bit mucky and icy, bound by a beautiful, almost eerie mist. And, literally, the moment I found the cache, rain started falling. Happily, it wasn't heavy or cold, and the hike back to the car wasn't very long.

A satisfying end to the old year, and perhaps a propitious opening for the new. 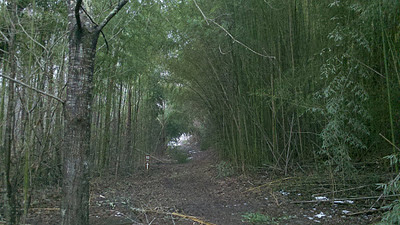 The bamboo grove on the Laurel Bluff Trail 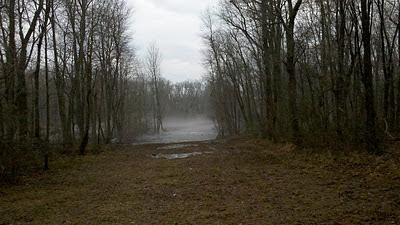 Mist over the marsh near the trail