Out on the Dam Trail 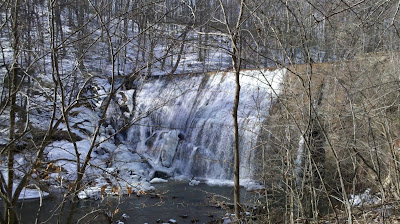 There's something very satisfying about hiking in the snow, especially when there are geocaches to be found out yonder. In higher-traffic areas, most of the white stuff has melted, but there's still plenty of it out in the woods. I managed a first-to-find on a fairly new, very evil cache, hidden by the right wicked Mr. Rob Isenhour (a.k.a. robgso); then it was off to Martinsville and a hike out by Fisher Dam, on Marrowbone Creek. Back in the days of my checkered youth, I spent lots of time at the dam, imbibing things that probably ought not have been, and in later days, I occasionally accompanied my brother out here, where he was fond of walking his dog, Luther (R.I.P.). It's a beautiful site, a few hundred yards back in the woods off an old country road. Back in 1925, the land was owned by the Fisher family, who built the dam for hydro-electric power — largely for operating the pumps to milk their 200+ cows, so I'm told. Just for good measure, they put up streetlights in the area, making it one of the only places in rural Henry County to have electric streetlights in those days.

Hiking along the river past the dam, I found numerous piles of ancient bricks and other building materials. Mountain laurel grows in profusion along the banks, and wild turkey apparently enjoy congregating in the surrounding woods. Most significantly, judging by the eerie sounds I used to hear out there late at night, I'm pretty sure shoggoths also haunt those woods, lying in wait for unsuspecting victims.

It's a damn fine place for geocaching. I definitely approve. But do mind the shoggoths, if you want to live to cache another day.... 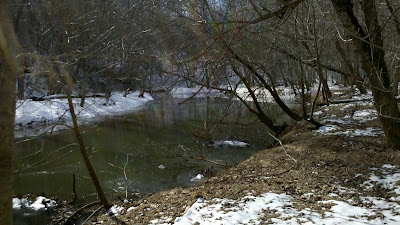 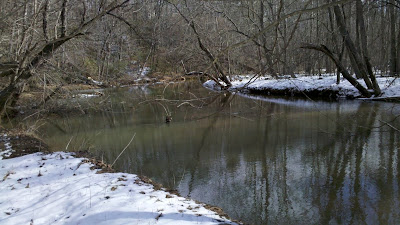