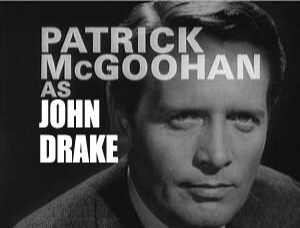 I remember watching Patrick McGoohan in Secret Agent (a.k.a. Danger Man)when I was a wee young 'un, though, of course, its finer points were lost on me at the time. Having fairly recently re-visited The Prisoner from start to finish, I decided to give the original Danger Man series (1960–62, 1964–68) a look via Netflix. What a brilliant show it was, if these days relatively obscure. While certain commonalities with the James Bond films are evident in the series, much of it was conceived before the 007 phenomenon reached the heights for which it's known today. I'm convinced that Patrick McGoohan was one of the most accomplished actors of his day, in this series alone displaying a wide range of character portrayals by way of impersonation and disguise, all the while remaining true to the character of the series' protagonist, John Drake. And what a collection of stars and character actors from the day—Sam Wannamaker, Susan Hampshire, Niall McGinnis, Jean Marsh, Patrick Troughton, Michael Gwynn, Donald Pleasence, Lois Maxwell, Anthony Dawson, Bernard Lee, Burt Kwouk, (the last five of whom all appeared in various Bond films) and many more. The famous theme song by Johnny Rivers was attached only to the U.S. release; the title themes for both the original and follow-up Danger Man series were written by Edwin Astley. Despite being something of purist when it comes to original release versions, I must say, I do prefer the Johnny Rivers song. Call it nostalgia.

I have distinct memories of seeing McGoohan in Disney's The Scarecrow of Romney Marsh from the early 60s, which I would love to check out again in its entirety. It's a beautiful period piece, set in the 18th century, about the swashbuckling adventures of Dr. Christopher Syn, based on the early 20th-century novels by Russell Thondike. Originally made as a three-part television serial for The Wonderful World of Disney, an edited version was released in the UK—and later on these shores as Dr. Syn, Alias the Scarecrow. Alas, the Disney film is not currently available (I do so hate Disney and their ultra-limited video releasing, but that's whole nuther topic). And in the 1980s, McGoohan played the darkly charismatic Dr. Paul Ruth in David Cronenberg's classic Scanners, another one I haven't seen in years and need to remedy.