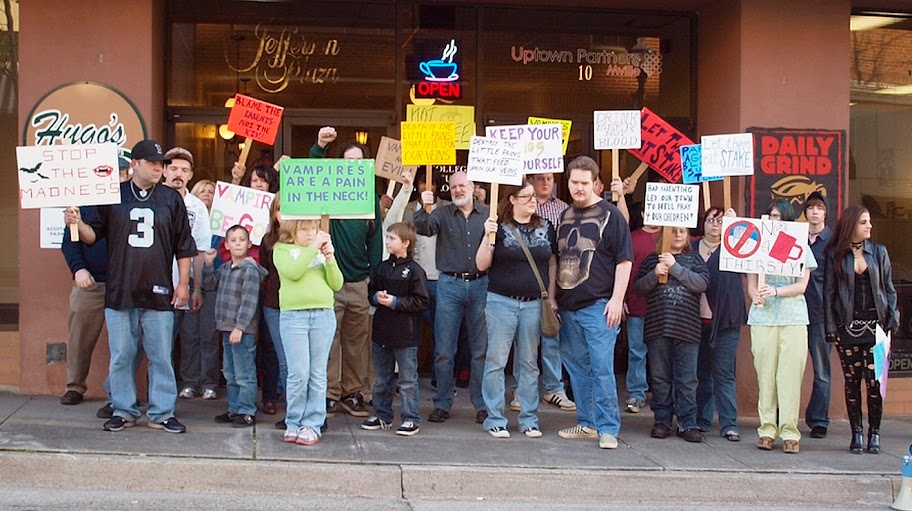 An unruly mob on location for Young Blood, the movie, in Martinsville, VA.
Be a bud. Don't drink blood.


Young Blood is the story of a small town whose children are succumbing to a veritable plague of vampires. And the parents don't like it. Not one little bit. Here's how it goes: "Most little girls play with dolls and have tea parties, but Anavey and her younger sister, Anastasia, would rather play with severed body parts and drink blood. These angelic girls seek to create an army of young, blood-sucking vampires, out to destroy the adults who control their lives and treat them unfairly."

Young Blood, from the fertile imaginations of Martinsville, VA, natives Mat and Myron Smith, is being filmed on location in my old hometown. Mat is the proprietor of Smithstonia Videography and Graphic Design—and has also created his own line of rocking home-made hot sauces (which I have tried and highly recommend). The movie's leading roles are played by Autumn Ward, Zoe Cox, Rebecca Kidd, and Myron Smith. Today, a large number of extras was needed for an unruly mob scene in uptown Martinsville, so I decided to knock off work a little early and book up from Greensboro to participate.

At 5:00 PM this afternoon, around 50 folks showed up at The Daily Grind in Jefferson Plaza to assume the roles of anguished townspeople who just don't quite know how to deal with the sudden, ugly change in their children. But what could be more American than to parade through the streets protesting? Thus, carrying signs and chanting "Destroy the little pains who feed upon our veins!" and "Be a bud! Don't drink blood!" we marched up and down Church Street, baffling the local populace and frightening at least one stray cat. Tensions mounted as the affronted owner of The Daily Grind decided not to let the mob use the establishment's restroom, since it was for customers, not pitchfork-wielding rabble. The coup de grâce came when, at the end of the scene, a pair of police officers armed with doughnuts arrived to break up the gathering and make some arrests. Doughnuts and pitchforks went flying in every direction. Several protestors—nonviolent, I might add, since they were just shy of shedding blood—were hauled away like so many rabid dogs. As emotions among the crowd reached a crescendo, Mat yelled "Cut!"

Whether it makes it into the final edit, who can say, but in answer to a reporter's question about the plague of juvenile bloodsuckers, I did get to utter a few lines about children in general being wired badly. It was a pleasure to participate in this little endeavor, not to mention make the acquaintance of several very nice local folks. I look forward to seeing the final cut of Young Blood, and when it's released, you can be sure you'll read about it here.

Visit www.youngbloodmovie.com or www.facebook.com/YoungBloodMovie for more info on the movie. 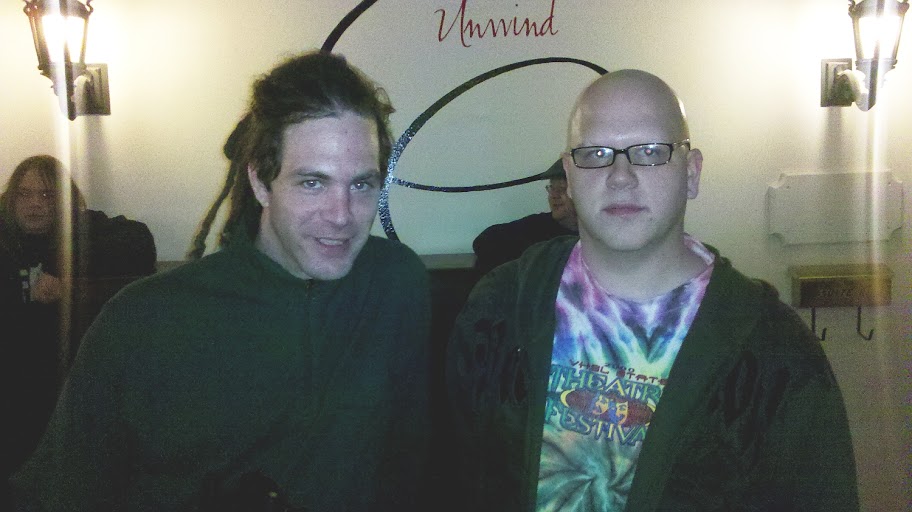 Mat and Myron Smith, the duo behind Young Blood.
Posted by Stephen Mark Rainey at 9:46 PM

Could not have said it better.

Wow! More creative life in Martinsville! AND...Have you heard that there's a new building being opened for Indie Artists? I was excited to be involved with the keys being passed for the opening of the We R Indie Music Center @ 66 Fayette Street in Uptown Martinsville!

Thanks so much I will definitely let you know when we have the next big group scene.

Thanks for the excellent review and your contribution to Kickstarter, Mark.

Can I be in the movie? can I be goth vampire? or an extra? find my parents on Facebook as frankie wright, he used to go 2 school w/ u.

Go here, and you can contact the producers directly. :)