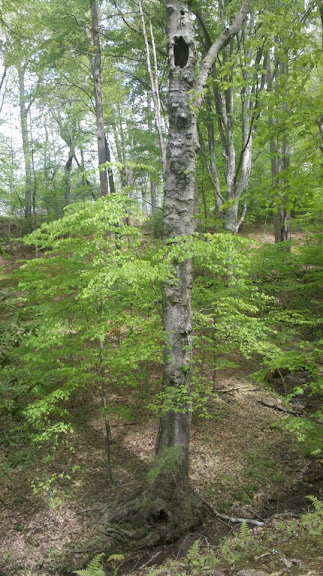 There's not a geocache up in that tree, but I think there oughta be. I half-suspect it's full of fairies, though....

It's been a good while since I visited Mum in Martinsville, so I got up bright and early and hit the road. First order of business: hit Fairy Stone Park, in Patrick County, and go after the one cache in the area I haven't yet claimed (except for a couple on islands in Philpott Lake that require boats to reach). Soon as I arrived at the park, I grabbed GPS and hiking pole and started for the trail... only to hear a very mean man growling at me that no geocaching is allowed at Fairy Stone. But I know better, and that voice belongs to none other than Tim "Medicine Turtle" Collins, who is at the park involved in a Boy Scout outing for Earth Day weekend. We traded caching stories for a while, and then it was off on the hunt. The cache itself was rather a quickie, but I passed the tree you see pictured, and all kinds of evil caching ideas began going through my head. Caches in Virginia State Parks require special permits, though, so that ever-so-tempting hole in the tree—about 30 feet up—is not a realistic hiding place, even if I were capable of such devious feats.

Of course, I know plenty of twisted geniuses who are....

Ever since before I was a zygote, there's been this place in Koehler, just outside of Martinsville, known for its "Chicken in a Basket." Garfield's, it's called, and for lunch I finally went in the place for the first time. The fried chicken knocked me on my hindquarters it was so flippin' good. It will not be 52+ years before I go back there, I can tell you.

Once ensconced at Mum's, after some much-needed visiting, I set to work on finishing up my latest tale, "Asylum." I got that done this evening, and it's been sent to the editor. It's 4,800 pretty good words, except for some really awful ones. Hope the editor approves even of those.
Posted by Stephen Mark Rainey at 11:50 PM