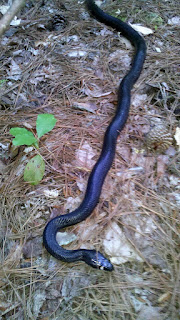 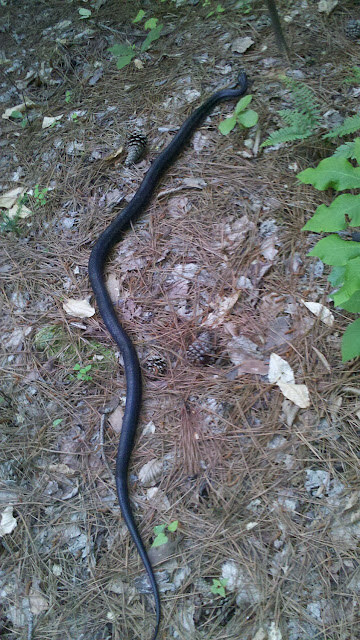 Actually, I do like snakes, quite a lot...as long as they're not venomous and looking to lay their teeth against me. Today, I spent a pleasant afternoon and early evening at Cedarock Park, near Burlington, hunting up a cache or two, and as I was making my egress through the woods, I saw this long, black tail sticking out from behind a nearby tree. "A-ha," I say. "I have found me a snake." Sure enough, it's a big black racer, not an inch shy of six feet, laid out as comfy as you please, giving me the eyeball. Turns out, snake is the friendliest fellow I've ever seen out in the wild, for he scoots right on up to me — absolutely fearless but not even a little aggressive — lays right up against my shoe, and lets me rub him on his back just a bit before continuing on his way. Important snake business, and all. I did enjoy making his acquaintance, for he's completely harmless and quite beneficial for the environment. Black racers are very common around here, but most of the time, they're anxious to get out of your way. Chances are, this one had just finished his elevenses and was feeling mellow.

Less  welcome was the umpteenth black widow I've run into ever since the weather turned warm. I've seen more this season than I think I've ever seen; they're everywhere, even hanging around the front yard (I think they're waiting for the mailman to bring Netflix). All well and good as long as you don't inadvertently pick one up — kind of like I did a while back on a caching expedition. Fortunately, as a rule, black widows would rather play possum than put the bite on you. Don't use them as yo-yos. 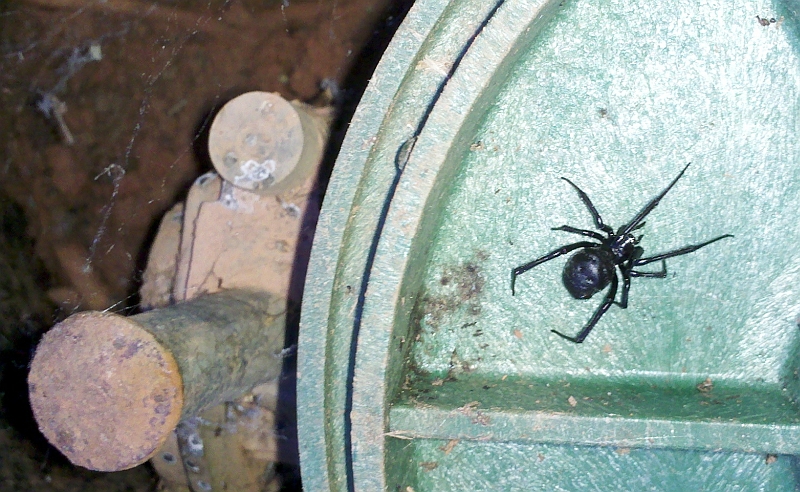