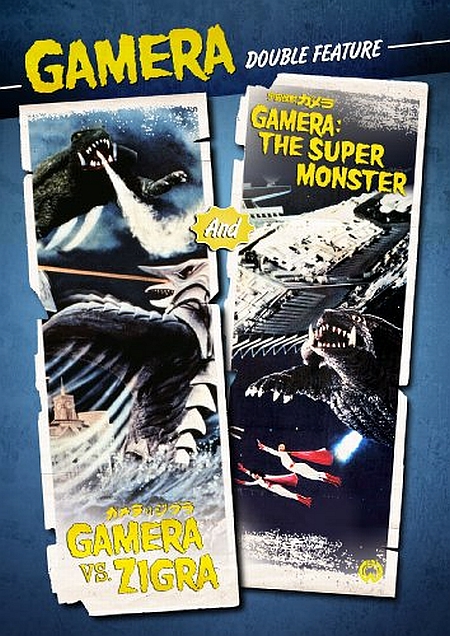 This double-feature package is the last of Shout! Factory's Gamera releases—well-produced, as is typical of these, though the movies themselves are anything but the cream of the crop. Gamera vs. Zigra, produced by Daiei in 1971, was the first of the Showa-era Gamera films to be released on our shores directly to video in the 1980s, with no prior theatrical or television release. Daiei ended up going bankrupt shortly after the film's completion, and it was released in Japan by Dainichi Eihai.

The film opens with an alien spaceship attacking and destroying a Japanese moonbase and then heading for Earth. The opening credits follow, and we are treated to the Gamera theme, sung by the Insane Children From Hell. Down on Earth, Dr. Tom Wallace (Kôji Fujiyama), his son Kenichi (Yasushi Sakagami), Dr. Yosuke Ishikawa (Isamu Saeki), and his daughter Helen (Gloria Zoellner) are enjoying a day of boating off the coast of Japan. They see the alien ship descend into the ocean nearby, and, before you know it, a teleportation beam has brought the little boat on board the spacecraft. A single, reasonably attractive, anthropomorphic space female appears to them and reveals that she is of an alien planet/race known as "Zigra." By way of demonstrating Zigran technological prowess, she creates a gigantic earthquake that wreaks havoc throughout Japan (all off-camera, of course). She then tells her prisoners of Zigra's past history and its great scientific advances—which, unfortunately, have resulted in the destruction of the planet; however, in searching for a new home, Zigra has found Earth (one guess what that means).

Single, reasonably attractive, anthropomorphic space female contacts UN authorities on Earth and orders them to surrender the planet or else. Dr. Tom, a bit on edge after all this, declares that the Zigran woman is insane; in anger, she retaliates by sending the two men into a hypnotic trance. But Kenichi and Helen—precocious, they are—use the ship's control console to hypnotize the woman and make their escape. Enraged, the Zigran overlord—a strange, shark-like being—orders the woman to go to Earth and kill the children, to which she replies it would be simpler to kill all the people of Japan. However, the great and powerful Zigra tells her that humans must be preserved so they can be used for food. Now, Gamera, intent on discovering the identity of the alien interloper, flies in to save the day and rescues the children and their fathers. The UN authorities, after questioning Kenichi and Helen, resolve to attack Zigra. Defense Force jets scramble, but Zigran spaceship makes short work of them with its powerful lasers. Alien woman, disguised as a normal single, reasonably attractive female human, arrives on earth and begins her search for the kids. She hitches a ride with the Sea World dolphin trainer back to the facility, which the military is now using as its center of operations. She finds Kenichi and Helen, but before she can fix their wagons, they call out for Gamera, who obediently appears.

Gamera begins an assault on the Zigran spaceship—which, when hit with big turtle's fire-jet, transforms into the giant shark-like monster. Zigra grows larger and larger, and finally halts the flame-loving turtle with a ray that freezes its cell activity. Back at Sea World, the dolphin trainer and the facility's scientists discover a way to break the alien's hypnotic control with sonic waves. Thus, they manage to disable Zigra woman, only to learn that she actually is a normal human-type person: during the initial lunar attack, she had been driving a moon rover and was captured and put to good use by Zigra.

Drs. Wallace and Ishikawa employ a bathyscaph in an attempt to wake Gamera, only to find that Kenichi and Helen have stowed away on board. Zigra suddenly attacks them and again demands Earth's immediate surrender...or it will destroy the bathyscaph. The UN commander reluctantly agrees to the alien's terms.

An electrical storm approaches the bay, and a bolt of lightning revives Gamera, who snatches the bathyscaph from Zigra and returns it to the surface. Gamera and Zigra face off a final time, and Zigra, using its superior versatility underwater, slices Gamera's chest with its blade-like dorsal fin. Gamera takes hold of Zigra, flies into the air, and then slams the bad critter against the earth. Pinning Zigra to the ground with a boulder, turtle grabs another and uses it, like a hammer on a xylophone, to play the Gamera theme on Zigra's dorsal fins (while dancing merrily along). Finally, Gamera ends Zigra's miserable existence by setting its body on fire, reducing it to ash in a massive conflagration.

Mind you, any sense of excitement evident in the description above is completely accidental. Gamera vs. Zigra is one of the slowest-moving of the Gamera series, with long stretches of exposition (such as the early narrative describing the features and functions of Sea World) and few enjoyable monster scenes. Until near the end of the picture, most of Gamera's scenes are shots of him flying around, eyes perpetually rolling back and forth. Zigra itself is no better or worse than any of Gamera's other foes; its silvery goblin-shark appearance is suitably menacing. Its ability to communicate by speaking in Japanese (presumably via telepathy), in context, works well enough. It's certainly more palatable than the conversation between Godzilla and Angilas in Godzilla vs. Gigan, or even the monster dialogue "translated" by the Shobijin in Ghidrah, the Three-Headed Monster.

Special effects scenes are fewer and sparser than ever in this movie, reflecting the ever-diminishing budgets forced by the collapsing of the Japanese film industry in the early 1970s. Juvenile characters and humor, the trademark of the Gamera films since Gamera vs. Gyaos (1967), are taken to the extreme here, and little Kenichi could hardly be more obnoxious.

Until the re-booted 1990s Gamera series, the big turtle would appear only once more—virtually entirely by means of stock footage—in 1980's Super Monster Gamera, which is the second entry in this Shout! Factory double feature.
Posted by Stephen Mark Rainey at 6:47 PM