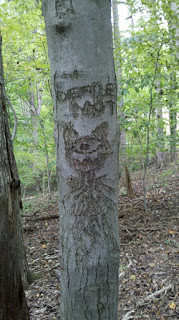 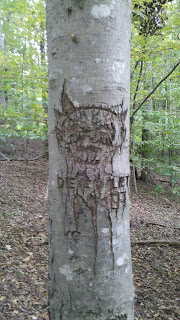 When I was a young'un, the woods around my house in Martinsville were a source of pure joy as well as abject fear. In the daytime, they were a seemingly endless place to explore, play army, hunt dinosaurs, practice kung fu, blow up model tanks, and all kinds of exciting things. At night, whippoorwills, owls, insects, and other night creatures made eerie, sometimes ghastly noises that convinced me all was not what it seemed in the dark. It was the latter that so shaped my sensibilities early on and most directly influenced me to explore the emotion of fear in my fiction. It was from those woods that the "Fugue Devil" sprang (see The Log, May 23, 2006), and that "The Gray House" was born. In my teenage years, with the onslaught of land development in the area, I became aware of how fragile and how precious such places are — and how utterly decimated I would feel if they were destroyed by those who see such green areas as nothing more than sources of revenue. Happily, for the most part, those woods still exist, though there are certainly more houses in that part of the neighborhood than when I was growing up. One of my favorite things in my current wanderings there is finding old souvenirs of my past there: bits and pieces of countless toys and models that I used in early special effects experiments; the beech tree carved with the name of our old kung fu club ("Swords of the Dragon," or some such thing); and the two trees that boast the visages of protective demons, which, in my young teen years, I carved to emphasize the natural patterns in the bark, along with the words "Defileth Not" — warnings to anyone who might go into those woods for any reason other than to preserve them.
Well, they're all still there, so maybe the demons are hard at work. Let's hope so. 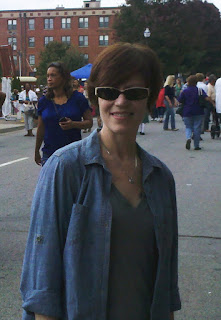 Brugger and I undertook a little trip to Martinsville this weekend, by way of the Eden Drive-In Theater on Friday night, for a showing of The House at the End of the Street. It was unremarkable, but a fun enough little drive-in movie to kick off the Halloween season. Then, yesterday, she and I spent the day uptown at the annual Oktoberfest celebration. Mainly, I went to autograph some posters from Young Blood: Evil Intentions (see Fun Blood, September 22, 2012 ), which movie makers Mat and Myron Smith were selling at their booth, but I really did enjoy wandering about checking out the vendors' wares. There was a record number this year, and I don't think I've ever seen a bigger crowd in town, save for the Christmas parades I used to attend as a kid. I hope the many vendors made lots of money. We parted with a few dollars here and there, and we had funnel cake. That's two weekends in a row I've had funnel cake. I may die. Of joy.

Last evening, my friends Joe Albanese and Dan Shannon celebrated their birthdays at the Albaneses' place in Greensboro, so after a spot of geocaching in Danville, Brugger and I went to help them out. We drank wine and stayed up late.

Today, it's back to The Night Cache, the current work-in-progress. And, if I'm lucky, perhaps a little caching as well.