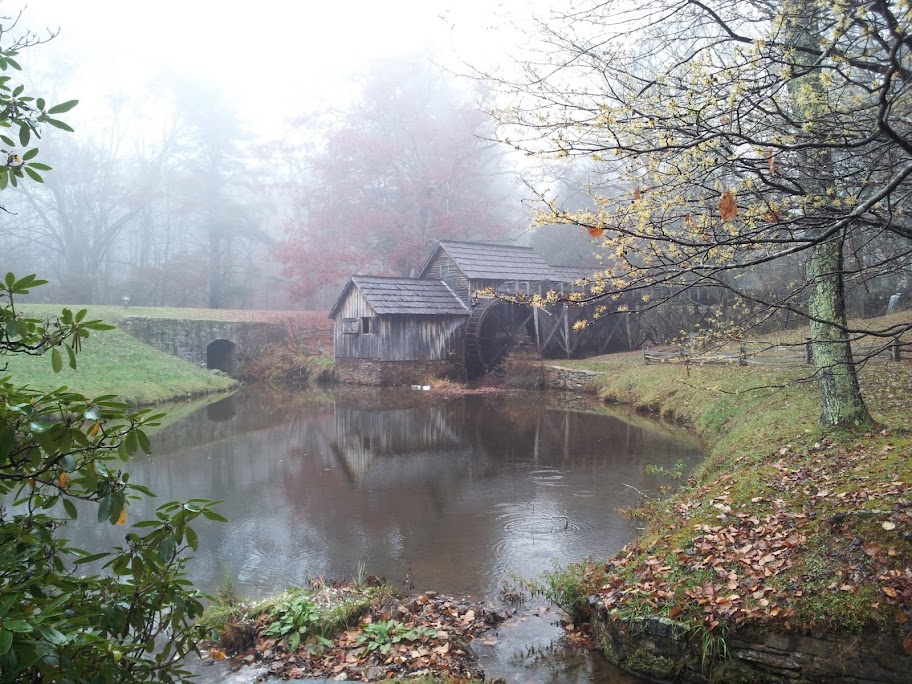 Since I was quite the young chap, most every year — usually just before Halloween — I have made the pilgrimage to the Blue Ridge Parkway and Mabry Mill for their incomparable buckwheat pancakes. This year was no exception. Ms. B. and I were up long before the sun for the trip, and, as it turned out, the sun never even showed its face, for a massive wall of clouds and fog enveloped everything as we made our way from Martinsville toward the Parkway.
We arrived safely at Mabry Mill just before the restaurant opened at 8:00 AM and commenced the usual feeding frenzy: pancakes, bacon, and scalding hot coffee — black as midnight on a moonless night, naturally. Then it was off to nearby Buffalo Mountain for a bit of hiking and caching. Though the temperature wasn't uncomfortable, the fog remained thick, almost impenetrable, until well after noon. The drive on the gravel road to the trail head and the hike up the steep mountainside were straight out of Stephen King's The Mist, which meant the spectacular views the trail typically affords consisted mainly of solid white sheets. Occasional gunfire in the distance did make me wonder whether a heated battle with fee-rocious supernatural critters might actually be in offing. Alas, I never did spot any malevolent, carnivorous beasties; only a colorful and reasonably friendly salamander, which, I suspect, was a bit too small to manage any appreciable human carnage. Sigh. However, there are two caches at the summit ("Eye High" [GC1J1HX] and "Buffalo Mountain Preserve Cache" [GCNNZP]), both of which we logged without undue difficulty.

From Buffalo Mountain, it was down to Villa Appalaccia — one of the best wineries in the region — for a tasting and a glass of Aglionico; then over to Chateau Morrisette, just five minutes away, for another tasting, a glass of Cabernet Sauvignon, and a picnic lunch on their sprawling, scenic grounds. About the time we started back from the Parkway, the fog began to lift — sadly, revealing not even one giant monster lumbering about the countryside. One of these days, I tell you, we're gonna find one, and then there will be such a party.