Brugger on a Bike, It's Hot!


Finally today, the rain that's been falling so long I've started channeling Noah let up long enough to grab a couple of caches and do maintenance on several of mine around Martinsville. Brugger and I headed out from Greensboro last night, stopped in Reidsville for a fabulous dinner at The Celtic Fringe (she had superb polenta — yes, at a Celtic place — with vegetables, I had excellent fish and chips), downed a couple glasses of wine at Rania's in Martinsville, and then went round to see Mum, whom we've not visited in too long a while. Today, we met up with my friend Ed "Kuykenew" Kuykendall to find some caches, including a quite novel one ("The A:Maze:ing Micro," GC4F9D9), which was placed by a relatively new geocacher. With over 6,000 caches under my belt, I'd not seen one quite like it before; a commendable job! Afterward, it turned out Mr. Kuykenew had the same lunch destination we did — Garfield's, over in Koehler, which is good, southern home cooking — so we put up with each other for just a bit longer and swapped a caching tale or two... or several dozen. Garfield's fried chicken is the best dead bird around, no question.

Next, Brugger and I hit the Dick & Willie Trail (shut up), hopped on a couple of bikes, and put in about seven miles... which, on a fairly full stomach, in 100% humidity and 90+ degrees, was kind of tiring even for this sturdy old man. When we got back to Mum's, Ms. B. took a nap, and the blasted rain started up again. This is easily the longest spell of essentially nonstop precipitation I've ever lived through. Coming back to Greensboro on the back roads, we came upon road after road closed because of swollen creeks and washed out bridges. No doubt it's something to get used to as the planet gets hotter and uglier.

Perhaps I will sleep well tonight. 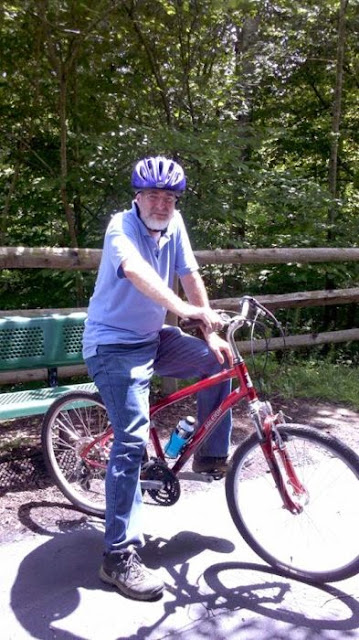 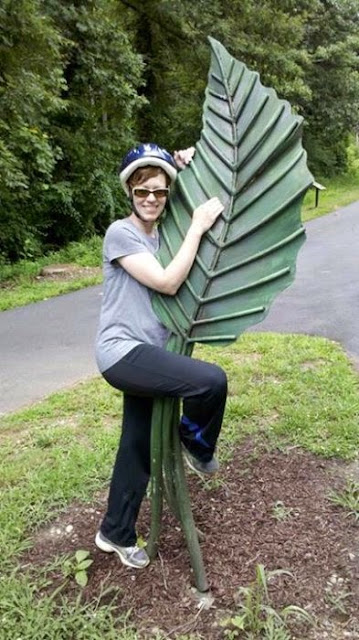 These are activities for which one should always wear a helmet.
Posted by Stephen Mark Rainey at 9:10 PM

You should have seen the New River yesterday. Carole and I went up to Sparta to go kayaking there...no way. The river was far beyond flood stage. And the rain would NOT stop!