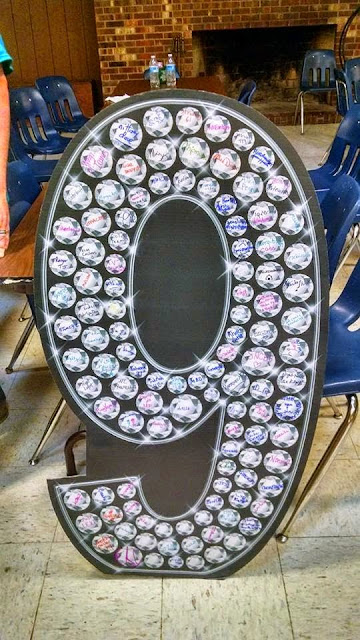 For the past nine years, each fall, a veritable horde of geocachers have gotten together for a big social event called Fall Fling, sponsored by the North Carolina Geocachers Organization, a loose-knit but very active group of individuals whose aim is to "facilitate communication between North Carolina geocachers, the public, and land management officials in a cooperative effort to promote geocaching, an appreciation of the outdoors, and good stewardship of the land and environment.” This weekend, the ninth annual Fling was held here in Greensboro at Hagan Stone Park, with nearly a hundred cachers in attendance. There were prizes, contests, activities for kids, camping, food, hiking, biking, and — most importantly — a bunch of new caches to find, both inside and outside the park. First thing this morning, number one Trail Dawg and consummate old fart Rob Isenhour joined up with me to go after the new ones and make our way to the event. We had only just arrived at the first of the caches when a familiar figure appeared — Mr. Tom "Night-Hawk" Kidd, hoping to beat us to some first-to-finds. Ha! Foiled! We combined forces with Night-Hawk and did, indeed, pick up several first-to-finds before getting to the park.

A particular favorite cache of the day was a unique hide by Mr. Rob "Maingray" Maile — a new entry in his "Yuggoth" series, based on... you guessed it... the Cthulhu Mythos, and the cache itself lived up to the theme. Yes, I am feeling the unspeakable terror, thanks for asking.

The entire event was a volunteer effort, and I wish more people who were paid to do their jobs were as dedicated and efficient. From keeping events within the event running smoothly and on time, to cooking and serving the food, to all the administrative work, from my perspective, everything was flawless. Plus there were dozens of cachers in attendance I already consider good friends, not to mention others I'd never met before but have now made their acquaintance. All among the many reasons I love, love geocaching.