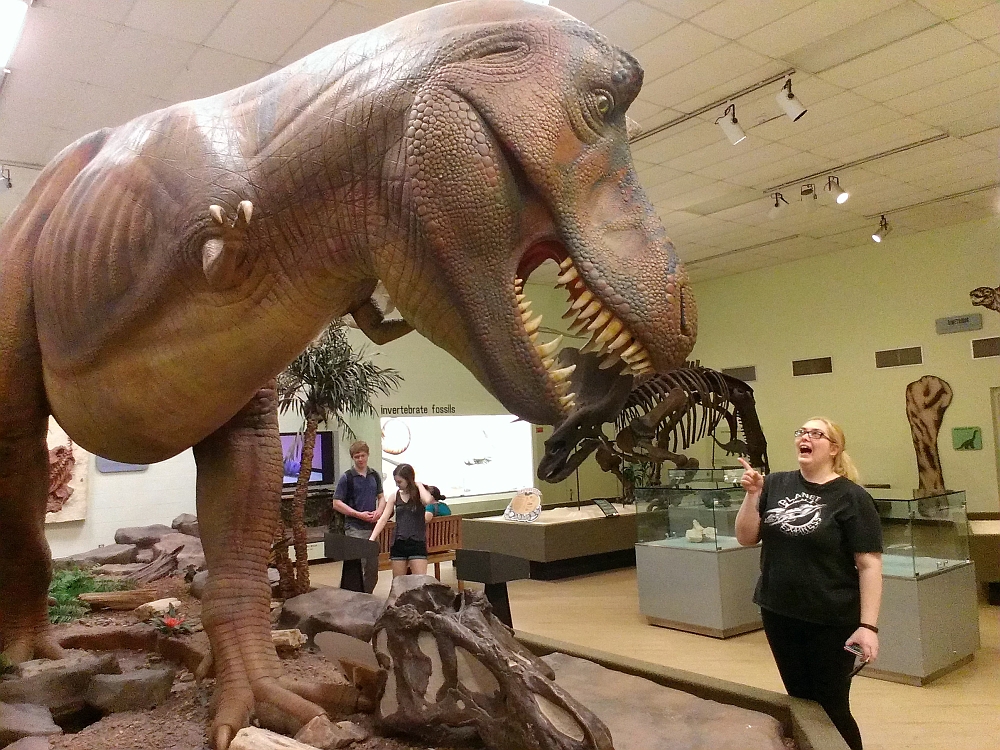 Kidlet came into town from New York City last week, and she's staying with me this weekend. She wanted to see the Greensboro Natural Science Center, as she hadn't been there since she was a wee youngster and it was a single building with just a few displays — and except for hunting geocaches on or around its premises, I've never been. It's now an extensive, multi-million-dollar complex, with lots of live animal displays, dinosaurs, rocks & minerals, aquariums, and a treetop rope course (which Allison did not care to do, but I'm quite sure I want to give it a go). 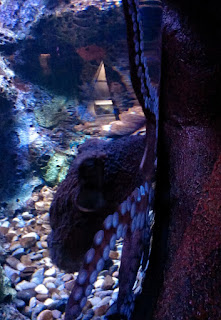 We spent a good couple of hours seeing the sights, the highlight surely being the pair of tigers who have a nice big area to roam and mingle with guests — well, almost. We were also quite taken with the pair of fishing cats, a passel of penguins, a bunch of otters, and stingrays of all sizes, which you can pet as they glide past through the pool. There's a huge octopus, which we were told only rarely makes an appearance, but it was kind enough to treat us to a brief appearance when it came out from its cover of rocks to check out the passersby. Bet he would have made for some serious tako-su at any of the nearby Japanese restaurants (octopus is one of my favorites, by the way).

Out in the zoo area, there were several dinosaur-sized tortoises; a number of playful gibbons in the trees; some shy lemurs gathered together in a hovel and grooving on a pict; and a peacock strutting around the pedestrian walkways, which made me wonder whether we had stumbled onto the NBC lot by mistake.

Afterward, we headed over to Stonefield Cellars Winery in the Stokesdale area — by way of a few geocaches — which made for a most pleasant afternoon, the weather kindly cooperating with sunshine and balmy temperatures. We shared a bottle of their Synchronicity red blend, which is one of their many excellent red selections. It was nice to see that Stonefield has a new winery cat, named Fizzgig (from The Dark Crystal). Some time ago, their original winery cat, Noah — a beautiful bengal cat — passed away. Fizzgig — whom Allison referred to as Francis — proved himself affable company while one is drinking wine in the great outdoors.

Then, finally, we made our way back into town and met Ms. Brugger, Jenny Chapman, and Doug Cox at Casa Vallarta Mexican Restaurant for dinner. Fair Mexican fare, excellent company. Today, the kid is preparing us a nice lunch. I hope to survive to tell the tale.