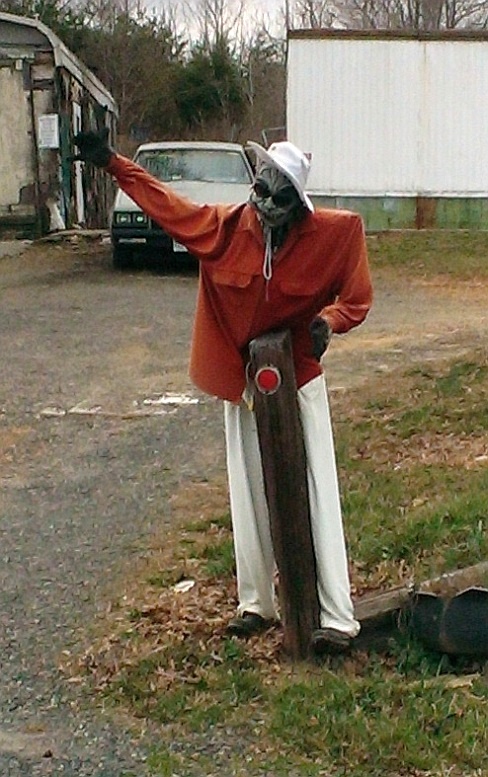 Yeah, the Sandy Level Creep is watching you. Apparently, the Creep has changed into his best spring attire, as you can see in the accompanying photo. He's shed his tattered gray raincoat and donned a red long-sleeved button-down shirt, off-white slacks, a sassy hat, and a pair of ultra-stylish shades. He still wears his customary broad smile and offers a cheerful wave to folks driving past on the old Axton Road in Henry County, VA, just north of the NC state line.

As friendly as the Creep appears to be, he's very much the strong, silent type, and I've yet to see him engaged in conversation with anyone. Presumably, the Creep's family lives in one of the mobile homes on the property, and I can't deny a certain temptation to stop and see if they're the chatty sort. I'd love to hear the story behind this fellow.

At least, I think I would.

Too busy to blog much lately. Life is running me ragged. At least there's a whole slew of new caches to go after in my snippets of spare time, courtesy Mr. Rich "Night-Ranger" Colter — 380 of them, give or take a few. Happily, there are a fair number I can grab on my increasingly regular comings and goings from Martinsville. They do add a sparkle to the day.

Peace out, creeps.
Posted by Stephen Mark Rainey at 10:56 PM