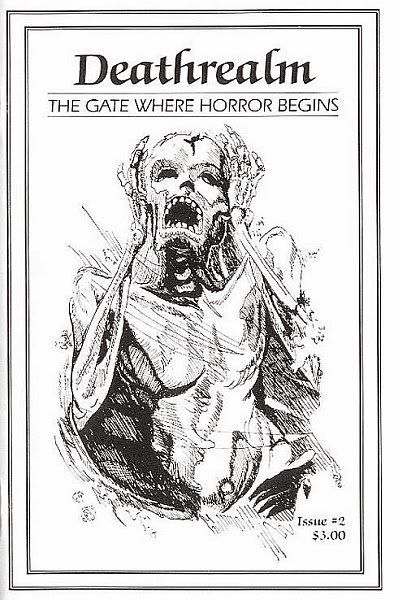 "They do get hungry this time of year..."

I first became aware of Wilum H. Pugmire in the late 1960s/early 1970s, when his name ("Bill Pugmire Jr." back then) and image (oftentimes in "Count Pugsly" attire) occasionally popped up in the "Fang Mail" pages of Famous Monsters of Filmland, which I collected for most of a decade with near-religious zeal. Soon, I found his letters and editorials appearing in the pages of Greg Shoemaker's legendary fanzine, Japanese Fantasy Film Journal, and so, long before I ever made his acquaintance, he seemed to me an old friend.

When I was looking for work to fill the pages of Deathrealm's earliest issues, Wilum was one of the first authors I contacted, and I was delighted when he sent me his short-short tale, "Cool Mist," which ran in issue #2 (Summer, 1987). This was no Lovecraft pastiche — a thing I came to dread receiving in the slush pile — but a piece of truly weird fiction, rooted in the Lovecraft vein but unique in style and tone.

The story features Wilum's doppelganger as the narrator (evidenced by certain anecdotes he shared with me in letters): a gay punk who's anything but the stereotypical punk. He's a tad eccentric, as he enjoys dressing in Victorian garb and wandering among the Seattle wharves carrying bits of cheese to feed to the local rats. On one of his excursions to the waterfront, he discerns another individual approaching, much to his dismay, for he prefers solitude as he wanders amid the shadows. As it turns out, the other character — another punk, or so it initially seems — also enjoys haunting the waterfront, for reasons of his own. As the two engage in a somewhat awkward conversation about their respective raisons d'être, the narrator notices certain anomalies in the mist that comes rolling in over the water, and that that his unwelcome companion carries with him a bizarre burden. It is here that the true horror of the tale takes you in its grip....

On my first reading of the story, its climax drew from me an uncharacteristic pang of sorrow, accompanied by a genuine shudder. The weirdness of the characters and setting, the lush imagery in Wilum's prose, and the depth of emotion within what is essentially a simple tale of a horrific encounter, all come together to make "Cool Mist" one of the standout stories from Deathrealm's 31-issue lifespan. Wilum revised the tale for later publication, but I find its original incarnation the more powerful, its effect having lingered with me over more than three decades. 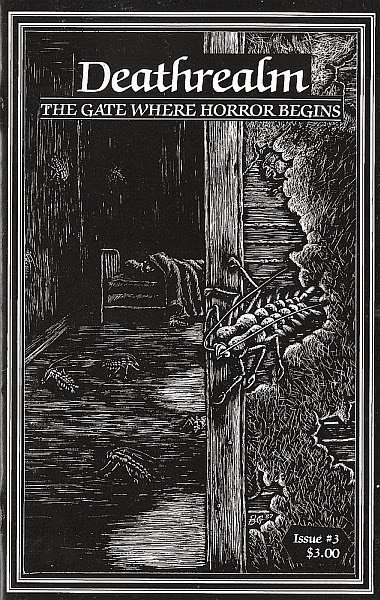 "Be careful where you wander. We wouldn't want to lose you..."

The third issue of Deathrealm (Fall 1987) included another of Wilum's tales, this one set in the Sesqua Valley, his now well-known west-coast counterpart to Lovecraft's haunted New England. "A Piece of Stone" is the story of author Desmond Peters who has discovered a book of weird fiction written by one William Davis Manly, who originally came from Sesqua Valley. Fascinated by the material within and hoping to compile a greater volume of Manly's works, accompanied by photographs of Sesqua Valley, Peters goes to the location to research and explore. Here he meets kindly shopkeeper Nathan Vreeland (a recurring character in Wilum's Sesqua Valley tales) who listens with interest to his plan but then attempts to dissuade him, stating that the people of Sesqua Valley prefer to live in relative isolation and would not appreciate the extra attention that such a volume would bring. Naturally, Peters resists the idea of giving up on his project and decides to go exploring the valley on his own.

At first, Peters is struck by the beauty of the mountains and forests, particularly the white stone–crested Mt. Selta that rises above the valley. Yet the deeper he explores, the more edgy and apprehensive he becomes. Something he first takes to be a snake rustles through the foliage around him, but when he meets one of the locals — an elderly woman wandering on her own in the woods — she informs him "there are no snakes here." As his anxiety mounts, he decides to give up on his walk, but not before taking a piece of white stone from the mountain to keep as a souvenir.

And that, as we learn, may not have been the world's best idea ever.

With this story and others, Wilum utilizes characters that reflect his own interest in weird literature: author William Davis Manly, whose name can't help but bring to mind certain noteworthy authors in the field; Peters, whose naivete and devotion to a noble but misguided cause make him something of a "fanboy," his viewpoint one to which many of us can at least partially relate. He is skeptical of the warnings about the location, yet sensitive to its subtly menacing atmosphere. Wilum's use of imagery paints Sesqua Valley as an alluring and aesthetically beautiful natural area, but with that dark undercurrent typical of haunted places — deep shadows, sounds that don't seem quite right, unseen but subliminally perceived presences in the woods, an indefinable but tangible, unsettling air ("It is not wise to gaze at Selta for too long at a time," Vreeland tells Peters when he begins to feel disoriented from looking at the mountain in the distance). Wilum's prose reflects but does not ape the florid language of his 19th and 20th century favorites, a trait that has become a hallmark of Wilum's work over the years. The prose style and presence of such tropes in this and other of Wilum's tales, rather than playing as derivative, as they might in other hands, evoke an authentic air of age and dignity that transcends pastiche. Wilum's body of work, steeped as it is in Lovecraftian and other weird fiction, showcases a unique voice that is both for and about aficionados of the weird but that does not relegate itself to any small, dark niche.

In Deathrealm #1, by way of preparing readers for the horrors to come, author Jessica Amanda Salmonson, a longtime friend of Wilum's, provided a poem — simply titled "Wilum" — that served as something of an introduction to both his work and to him as an individual. In it she paints a vivid picture of his punk persona but also reveals an old soul with a genuine, questing spirit, contrasting his soulfulness with the superficiality of his punk contemporaries ("Wilum, in cape and high collar, is younger than the boy, although Wilum was here at the beginning of the world and will be here at the end"). True to its theme, Jessica's poem is no less relevant 30 years later than it was in its day.

As one of Deathrealm's "founding" contributors, Wilum left an indelible mark on the magazine, his work crucial to the character of the issues in which it appeared as well as shaping the editorial direction of issues to come.

You can find Wilum's stories in numerous anthologies and collections, including many Sesqua Valley tales, at Amazon.com. Click here to see more.

If you are interested in purchasing a copy of Deathrealm #2, which features "Cool Mist," I have limited copies available for $10, postage included, which can be ordered via Paypal (payee mark@stephenmarkrainey; be sure to include recipient's shipping information). Deathrealm #3, featuring "A Piece of Stone," is unfortunately unavailable.
Posted by Stephen Mark Rainey at 11:42 AM