Jeffrey Osier's "The Encyclopedia for Boys" 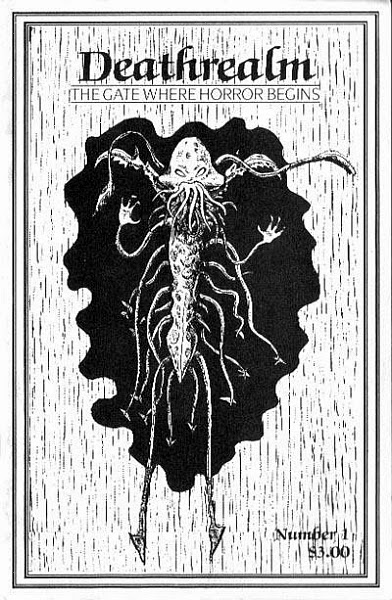 "More people are buried alive each year than most boys realize...."

I probably should do this more often: pull out an old copy of Deathrealm and read some of the stories within. I've revisited precious few of the tales from its pages since I originally published them, back in that decade between 1987 and 1997, and there are far too many I have either nearly or altogether forgotten, due simply to the passing of years and the sheer number of stories that have managed to cram themselves into my brain. Some, of course, stand out with varying degrees of clarity, and the one that rises above all is the first piece of fiction I accepted for publication — "The Encyclopedia for Boys" by Jeffrey Osier. I've read it at least two or three times since it first came out, including when it was reprinted in Jeff's fiction collection, Driftglider (Montilla Publications, 1993), but even so, it's been at least twenty years since I last read it. The other day, I decided to do something about that.

The title tome is the name of a kids' encyclopedia, much like those Golden Book Encyclopedias, kith and kin, from the 1960s (several of which I owned as a youngster), described in such a way that, on my first reading of the story, I wasn't sure whether Jeff was actually referencing a real book. Its contents, as he described them, struck me as eerily and profoundly familiar. It was only as I read further in the tale that it became clear the book was — much like The Necronomicon — entirely fictional but whose verisimilitude could damn near fool one. The mysterious volume is the centerpiece of the story, but it's the journey into the mind of its protagonist, Ralph Holland, that draws the reader fully into the narrative. An insecure, lonely bookworm, Holland's life has been a series of disappointments and unfulfilled promise until he meets Annie Stableford, whose love of books forms the bedrock of a new, long-lasting relationship for the two of them. Holland manages to find security and strength of character he never knew he had, and even opens a small but successful bookstore.

But then, unexpectedly, Annie passes away, leaving Holland wallowing in a pit of despair far deeper than the one from which he had so recently emerged. Shortly following her death, he comes into possession of an old book — yes, The Encyclopedia for Boys — that strikes him as familiar. He realizes it was a book he owned as a child, but not only that, it is the same copy he owned as a child, verified by a drawing within made by his brother, Brian, who also remembers the book.

At first, the volume seems little more than a novelty to Holland until he begins reading through it and finds the contents subtly disturbing. A strange, dark absurdity about its illustrations and informational entries bemuses and unsettles him. A standout image is a clay jar with a section broken out of it, revealing a mummified, skeletal, yet horribly aware figure within. The more Holland delves into the book the more upsetting it becomes, especially when he realizes it also appears to be affecting the dispositions of his friends and co-workers. With Annie gone, Holland has begun exploring a new relationship with his friend Natalie, but now it appears that Annie may be attempting to reach out to him through the bizarre encyclopedia.

In the book he reads: "Wrapped up in the petty intrigues of their own lives, most boys never question the lifelessness of a rotting corpse. Yet there are many people who believe that, in the thriving ecology of decomposition, awareness is actually heightened. Consider the case of Annie Stableford, supposedly dead for over two months, but at this very minute screaming out to you with a heightened perception of her own."

At this point, it becomes clear that Ralph is either hallucinating, possibly psychotic, or that there is far, far more to The Encyclopedia for Boys than either he or we, the readers, could begin to imagine. All evidence points to the latter, for Ralph is hardly the only character affected by the uncanny stressors originating from the book.

This story was the first example of Jeff's prose I had read, and it immediately appealed to me. Vibrant, lyrical, even a little manic, with imagery vivid and sensuous. Initially, the encyclopedia itself is described as a brittle, cracked, all but worn-out book with a splash of old dried paint on its cover, but it eventually transforms into a seemingly organic, warm bundle, exuding heat like a loaf of bread fresh from the oven. The body in the clay pot is bony, reed-thin, dry, the sensory triggers in the prose sending up the reek of mustiness from the page. Even though this is one of Jeff's earliest tales — from my recollection, possibly his first story ever — his authorial hand is so assured you could be forgiven for thinking the tale might have sprung from a veteran storyteller, in whom your trust is guaranteed to be rewarded. 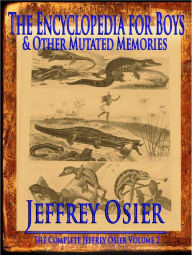 "The Encyclopedia for Boys" was the first but far from the last of Jeff's stories to appear in Deathrealm, and I will likely showcase more of them here in coming days. This tale, as well as other  of Jeff's stories, may be found in Vol. 2 of The Complete Works of Jeffrey Osier: The Encyclopedia for Boys and Other Mutated Memories (Kindle edition). If you are interested in purchasing a copy of Deathrealm #1, which features "The Encyclopedia for Boys" and various other stories, I have limited copies available for $10, postage included, which can be ordered via Paypal (payee mark@stephenmarkrainey; be sure to include recipient's shipping information).

I'll be periodically going back to revisit various authors and works that appeared in Deathrealm during its heyday, which I hope will acquaint and reacquaint my blog followers with some of the best voices in dark fiction I've ever read.

Until the next.
Posted by Stephen Mark Rainey at 4:51 PM