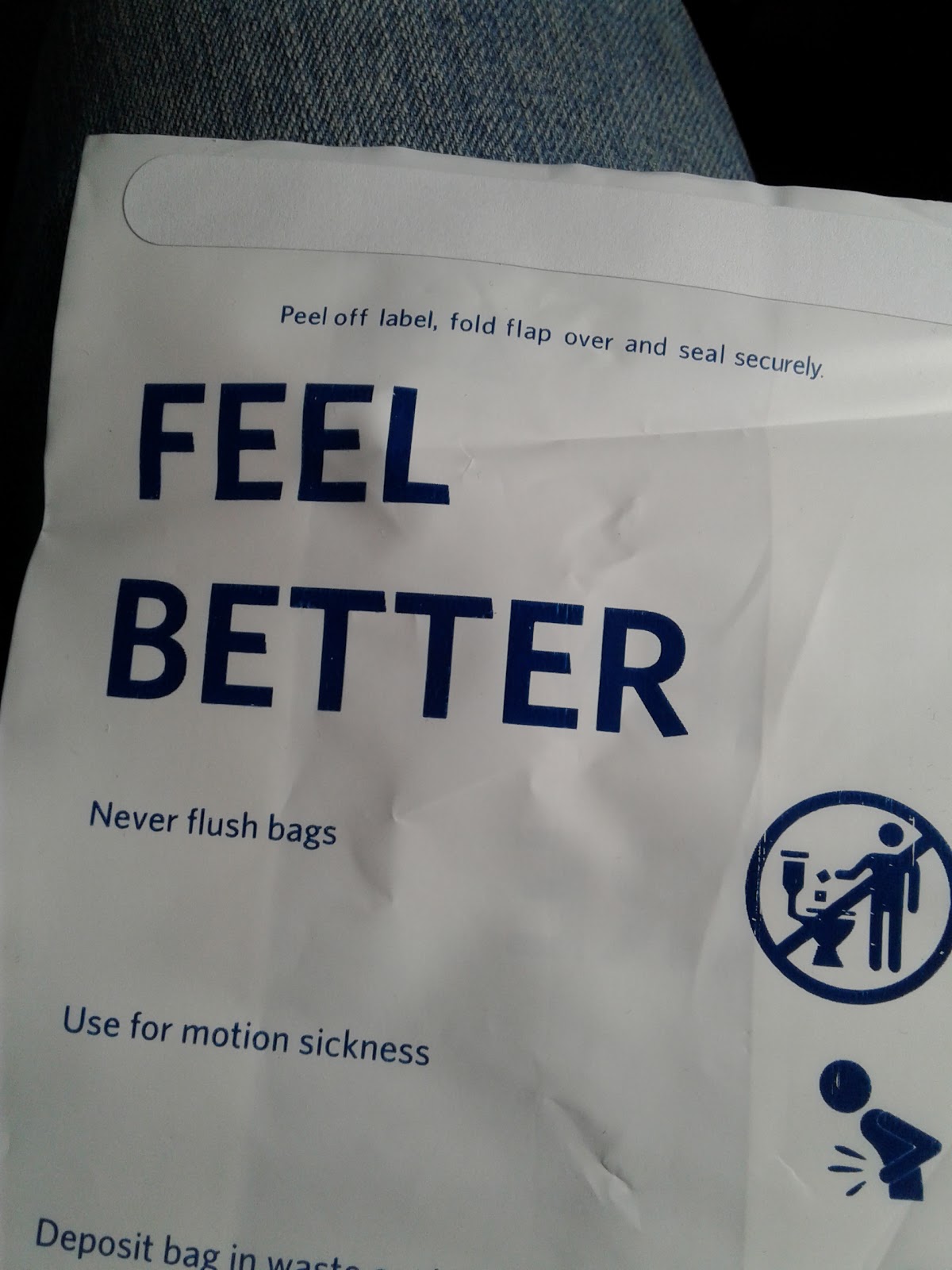 At least on Delta Airlines, the barf bags in the seat-back pockets are labeled "Feel Better" bags, and when Kimberly and I got on the plane last week to head up to her folks' place in Michigan, I thought it might be fun to write a story about a barf on a plane that assumes a life of its own and call it "The Feel-Better Flight." Little did I know what was in store....

Our flight left Greensboro at the ass-crack of dawn on Tuesday, 12/5, and all went like clockwork (happily, both coming and going—hats off to Delta), though on each of our flights, we found ourselves tucked into the very back of the planes like excess baggage. Her folks, Del & Fern, met us at Bishop International Airport in Flint, and from there, we made the hour's drive to their place in Midland. First reaction: cold. It's bloody cold in Michigan. But I knew this, and I actually appreciated the break from the south's tepid winter temperatures and oppressive humidity. We spent a mostly quiet first day enjoying the company and getting in a little Christmas (and wine) shopping. I did venture out into the cold to go after my primary geocache target for the trip—a wonderful little hide way up in a tree ("One Does Not Simply Walk Into Mordor: LOTR Advent"; GC6NFH5) that required some acrobatic maneuvers to claim.

On Wednesday, Kimberly, the folks, and I went out to the neighboring community of Auburn so they could do some home & garden shopping at Warmbier Farms. While they did that, I set out after a bunch of nearby caches, several of which were quite ingenious—and difficult. Some I claimed, some I did not. In the afternoon, Kimberly and I tore into some hellishly fantastic grinders at Mancinos, and then enjoyed meeting up with her longtime friend Darren (D.J.) for coffee at Starbucks in the local Barnes & Noble (which also came in handy for Christmas shopping). Evening time found us at the very nice bistro called Whine, which we had discovered when I last visited Midland (October, 2014; see "Midland and More in Da Moonlight"). All was going swimmingly at this point.

It was the next day the Feel Better Flight crashed and burned.
On Thursday, Del & Fern had invited us to accompany them to a semi-fancy luncheon for their church senior group, called the Prime-Timers (which, to my horror, I actually qualify for, age-wise) at the lovely Sullivans restaurant in Saginaw. Now let me preface this by saying a rather dreadful stomach flu virus had been circulating in Midland—to the point of some schools and businesses closing. Both Del & Fern had suffered from it the week prior to our arrival, but by all indications, they and the house were now plague-free.

Just prior to lunch, Kimberly began to complain of some stomach distress, but attributed it mainly to the excitement of getting to spend so much time with me. For safety's sake, she decided not to eat, while I enjoyed the best fish & chips I've ever tasted. Unfortunately, the deliciousness of the setting proved too much for her, and the next thing you know, she's scaring the crap out of other patrons in ladies' room with what might have been the absolute worst Feel Better moments she had ever experienced.

So, back home, we closeted Ms. Kimberly in the farthest reaches of the house so that our exposure to each other might be restricted. I decided to go out caching, which was fun and all, but I knew that, by now, it was far too late.

And sure enough, the next morning... my God, did I feel better! I felt better all over the bathroom, I can't count how many times. For the next 24 hours, I was down and out, washed out, drowned out, knocked out, out and out, damn near dead. Couldn't even keep down a single sip of water. Needless to say, Kimberly recuperated relatively quickly, and while I lay one foot in the grave, she was out dancing in the streets, pausing occasionally to look in on me to see whether it was time to call the crematorium.

As an aside, I'll mention that Midland has squirrels. Gray squirrels, red squirrels, fox squirrels, black squirrels. Fat squirrels. While ill, I watched nonstop squirrel antics from my window, which was far more entertaining than the television, since there were no commercials.

It took me a couple of extra days to shake off the bug, but shake it off I did, happily in time to enjoy a bit more of Midland before time to return home. During my downtime, central Michigan had received a fair fall of snow, and on Sunday evening, Kimberly, who by now was exhausted from all that dancing, drove us around town to look at Christmas decorations and for me to do some frigid nighttime caching in the snow.

The caching proved good, near-frostbitten fingers aside, and I most enjoyed revisiting the Tridge, a three-span footbridge at the confluence of the Chippewa and Tittabawassee rivers, with all the attendant Christmas decorations. While we had been hoping to have at least another nice evening out on the town, neither Kimberly nor I felt quite up to assaulting our stomachs with much more than water and/or ginger ale, so we took reluctant passes on visiting any of Midland's other spirit-filled venues. Mayhap next time.... 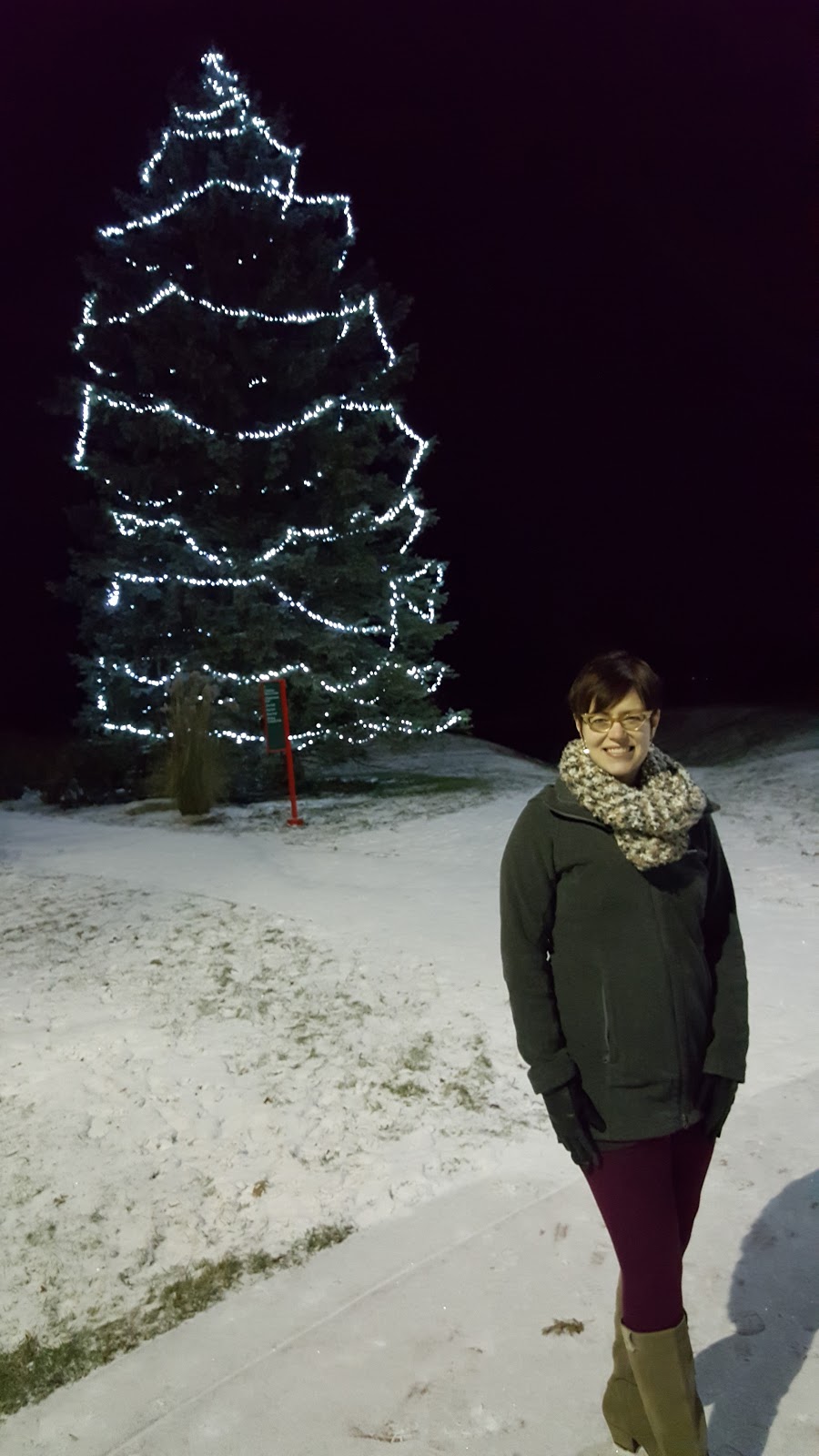 Apart from getting out caching in the snow, what sewed up my recovery was sitting through several episodes of Anthony Bourdain's Parts Unknown on CNN, in which he explored the cuisine and politics of Singapore, China, and Japan, and... oh my lord... I have never had such a craving for the Asian food flung upon me. Every sight on the screen, delicious beyond belief, taunting and tempting me, daring my fickle stomach to even think of betraying me. I wanted that Asian food. I had to have that Asian food.

The snow continued on through yesterday, which was a little concerning since we had to fly out from Flint, but once again our travels proved relatively easy, with all stages of the trip running smack on time. Still, with our schedule, we'd had no opportunity at all to eat during the day, and as we arrived back in Greensboro right at rush hour time, we decided to do something about this insatiable craving: go to High Point's Little Tokyo restaurant, which is one of our favorites for Japanese.

Oh, happy. Oh, happy! So much feeling better, this time for real.

For real... there is love. Thanks to Del and Fern for being such beautiful, wonderful folks, and to Kimberly for pausing the dancing to take me caching. I am already looking forward to the next Michigan trip, I am, I am, I am.