A Visit to the Callamo Mountains 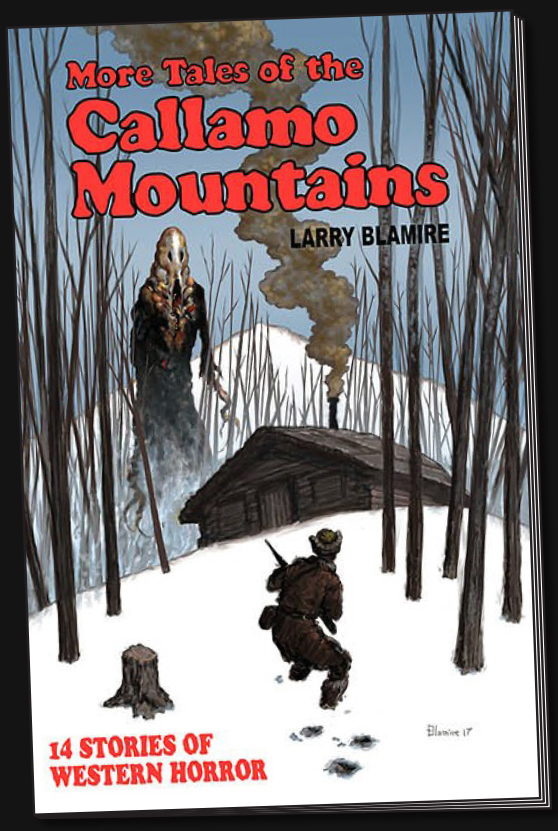 I enjoy westerns, and I love my horror stories, so when I recently became aware of More Tales of the Callamo Mountains, by author/artist/movie maker Larry Blamire (perhaps best known as the mastermind behind The Lost Skeleton of Cadavra, The Lost Skeleton Returns Again, A Dark and Stormy Night, Tales From the Pub, and other moving picture treats), it seemed right up my street. This collection is actually his follow-up to an earlier volume, aptly titled Tales of the Callamo Mountains (2009), which I have yet to read, but I confess I chose to begin with this one because of its striking cover (which Mr. Blamire created his very own self). Since the stories in these volumes are standalone works, one can evidently read both/either/or of the books and come away altogether unconfused absolutely satisfied.

While Blamire might be best known for his visual humor and unique wit, his western tales, while often infused with whimsy, play mostly as straight drama. Vivid imagery and eerie atmosphere pervade his tales, whatever their respective plots and themes. The sheer horrific drama in the cover image — which does not illustrate any particular story in the volume but essentially tells its own — characterizes the tone found in most of the tales within: a sense of otherworldly dread combined with taut, exciting action. As with virtually all collections, the stories in this one weighed in at different points on the success scale. The best of them I would go so far as to call minor masterpieces, while the least of them I would term flawed but noble attempts.

At the upper end of the scale, "Heliograph Station #24," "The Valley of Capper Crabb," "The Man From the Fires," "The Room With Nine Corners," and "Bar None" all present encounters with dark, deadly unknown forces, told in a consistently assured and often understated narrative voice. As I mentioned upriver, most of these tales, despite their grim earnestness, feature a lightness of tone that accentuates the terror when it does come about. For the most part, Blamire eschews the trappings of more conventional western stories — gunfighters/gunfights, white hats vs. black hats, savage natives, and such — though a few of the stories include their share of these archetypes, to satisfying effect. Most of the characters the reader meets are townspeople, prospectors, ranchers, peddlers, occasional swindlers, and a handful of military officers. Even those of less-than-desirable moral character make for interesting, colorful centers of focus. No character, setting, or menace here would even dream of boring you.

Few of these stories offer any definitive explanation for the inexplicable creatures and/or events that appear in each. One simply accepts that the Callamo Mountains and surrounding environs are a haven for all manner of things dark, direful, and deadly. Thus, one can never begin to guess what to expect from story to story.

"Bright Hawk Takes a Walk" qualifies as my least favorite tale in the volume, but even this one hardly counts as a failure. It reads more or less like a fable (as do a few of the other tales), with a substantive enough theme but never quite jelling, as the more action-oriented pieces inevitably do. One piece whose theme and imagery would have hit on all cylinders is the final tale in the book, "Two Lone Riders," had it been told through the characters' eyes, rather than by way of a third-person omniscient narrator, and included at least a modicum of dialogue. However, yet again, the story's imagery and climax succeed in conjuring a little chill, so I consider the piece a far cry from failure.

My only quibble with the physical production of the book (via Lulu) is that paragraphs are indented and have extra space above and below, which tax my aging eyes more than plain, single-spaced, indented and justified paragraphs. This is admittedly a minor point and in no way impacts the enjoyment of Blamire's authorial voice.

However effective individual tales might be in More Tales of the Callamo Mountains, the collection intrigued and entertained me from start to finish. I shall look forward to delving into its predecessor in upcoming days. Rating: 4.5 out of 5 Damned Rodan's Dirty Firetinis.
Posted by Stephen Mark Rainey at 6:57 PM