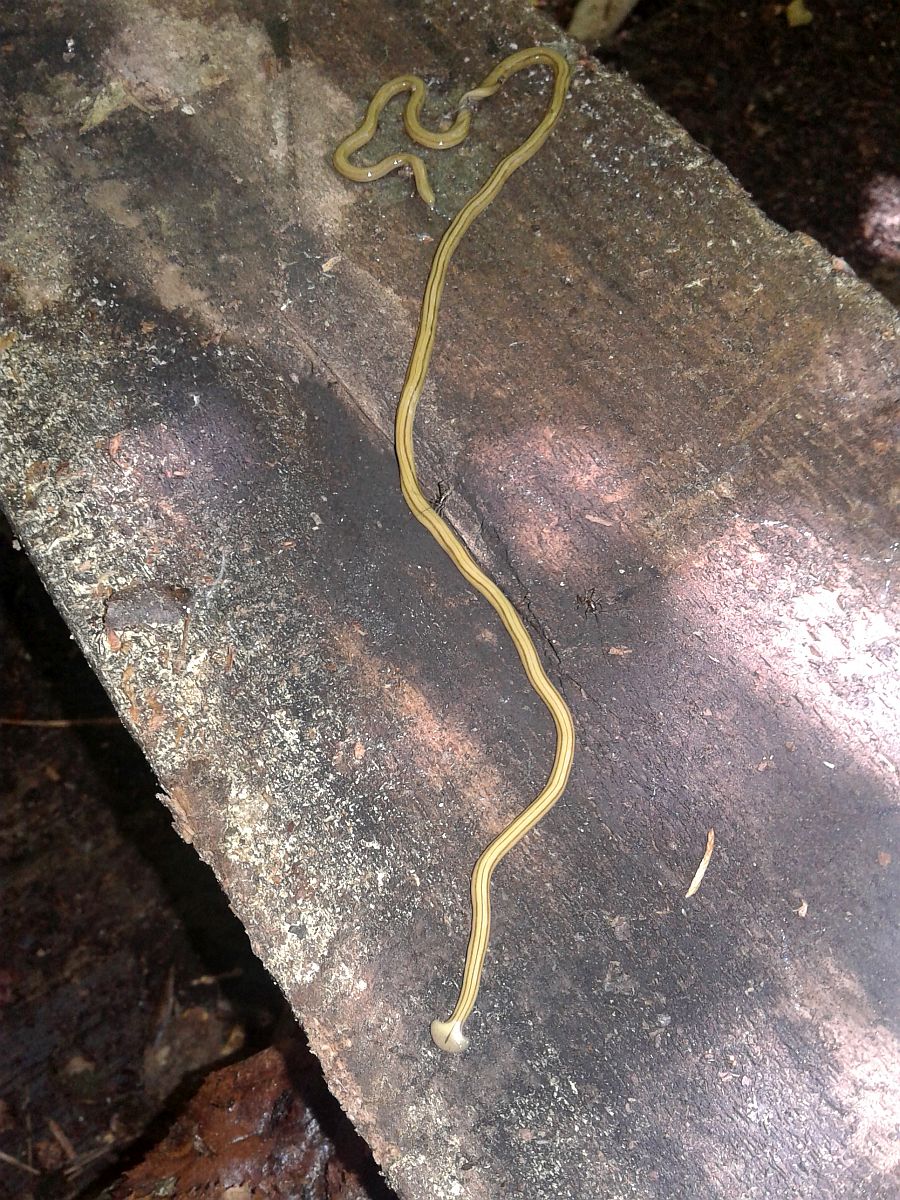 That unusual-looking critter you see in the photo is a two-foot-long Hammerhead worm, the first specimen of which I've ever seen in the wild. Team No Dead Weight turned it up while hunting a geocache over in Chapel Hill this morning. Hammerhead worms are not especially dangerous to humans, but they do prey on earthworms, which are beneficial to humans. Hammerhead worms use a virulent neurotoxin on their prey, which actually dissolves the earthworms they catch. This particular chap might not be what I would term pleasant-looking, but it certainly was fascinating. That thing just kept extending and extending, appearing to actually grow longer and longer as it moved. We let it go on its way, although had I known at the time it doesn't really qualify as a dear friend to people, I might have had a somewhat different reaction.

Our team — Robgso (a.k.a. Old Rob, a.k.a. Bloody Rob), whom we managed to keep up with this week (see "Where's Rob" from last Sunday); the ubiquitous Fishdownthestair (a.k.a. Natalie); and Diefenbaker (a.k.a. Scott) — had determined to visit the North Carolina Botanical Gardens in Chapel Hill, as there are numerous geocaches on a host of trails in and around the facility. The day was miserably hot, but we made the best of it, as we found a number of intriguing caches, including one in the deep, dark catacombs underneath the local Trader Joe's.

We started out at a five-stage multi-cache — Taberna Ferramentorum (GCYZ2Q) — which we didn't realize had such a long history. It was originally placed in 2006, and it hasn't had many finds in recent years. It started out simple enough, but as we proceeded through the stages, which included Roman numerals etched on rocks and such, we found that time and weathering had done a job on the information we needed. By a process of educated guesses and pure intuition, we managed to make our way toward the final stage, which turned out to be at a very old, very secluded area back in the woods just outside the Botanical Gardens' farthest reaches. Completing this multi required no little time and a fair distance hiking, but we enjoyed the experience immensely, especially since we had to rely on some outside-the-box thinking to make the find. We also found Roberto, a beautiful, six-foot black rat snake, who seemed pleased to have some friendly visitors. We sat and chatted for a while, but the conversation was, admittedly, somewhat one-sided.
From here, we made our way to several other caches, most of which proved relatively easy to find. We had spent quite some time on the trail by this point, so we headed to Cerritos Cantina for a late (and very satisfying) Mexican lunch. Scott and I both had the Tacos Diabla, which, I will tell you, are not even a little bit not-hot. They are hot. We hollered for happy. And just hollered.

All day, Ms. FDTS had been clamoring to hunt an underground cache. The NC Triangle has plenty to choose from, most courtesy of Mr. Vortexecho (a.k.a. Christian) his very own self. And there was indeed one that looked tantalizing. It's been staring at me from the map for many years now. We did notice that it had not been found in almost six years, and you never know how a cache in an extreme environment is going to weather the years. But we decided it was worth a shot. I won't post the cache name/GC number here, although by way of deduction, I'm sure some geocachers might determine which one it actually is.

Our destination turned out to be an underground passage, about 50 feet wide, into which Booker Creek flowed. Old Rob, being intensely un-fond of such grottoes as this, opted to remain outside, while Diefenbaker, FDTS, and I made our way into its shadowy confines. We had to walk on a narrow ledge along one wall, a few feet above the rather disturbingly deep water. The first thing we found inside was mud. Deep, slippery mud, all along the ledge. We also found lots and lots of huge spiders, which made for pleasant enough company, as long as they didn't try to hold our hands. After going some distance, we spied a foreboding object ahead — a long, narrow pipe that spanned the passage — which we suspected would host our quarry.

It was decided that Old Rodan would do the retrieval honors. Why, thank you so much, my friends. Getting onto the overhead pipe and scooting out to the container indeed proved physically challenging, but as we were this close, there was no way we were going to let this thing get away from us. I persevered, and a few minutes later, I had the container in hand and Team NDW scrawled on the log.

Then I had to make my way back to the narrow space by which we had accessed GZ. What fun! Scooting backward, I can tell you, is somewhat more difficult than scooting forward, particularly so close to the rafters, which constantly threatened to gong me in the head. Happily, Diefenbaker did a fine job warning me when I should duck. Soon enough, my feet were back in the deep, slippery mud, and we trudged once again into the hated heat and brilliant, blazing sun.

And that, my friends, is what geocaching was all about. After that experience, I felt enervated for a short while, but I've recovered nicely, and tomorrow there is a lengthy kayak trip on the docket. It's gonna be another scorcher too. Hooooeeeey.