A Graveside Chat with Ronald Kelly

For some time, I have been considering posting regular author interviews here on ye old blog, and I finally decided to jump in and just do it. To kick things off, the very sporting Ronald Kelly has agreed to play guinea pig. I published several of Ron’s stories in Deathrealm back in the day, starting with his wonderful “The Web of La Sanguinaire” in Deathrealm #6 (1988), which I loved at the time and still do. Since those long ago days, he has gone from establishing himself in the field of dark lit to taking a decade-long hiatus to returning and retooling himself and his work. He has cultivated and retained a receptive audience with an impressive body of work spanning several decades now. 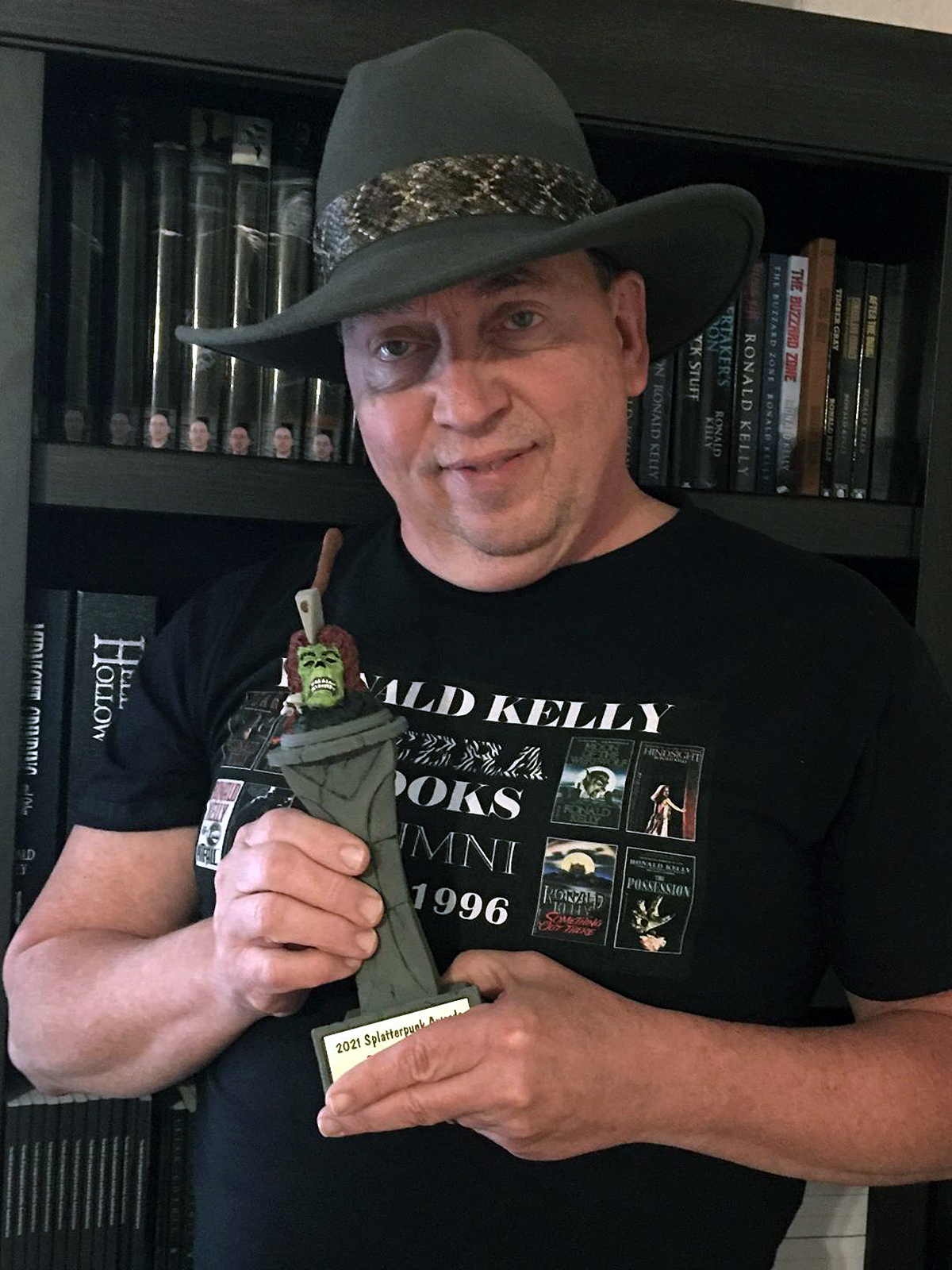 GC: During the mid-to-late 1980s and early 1990s, your short fiction was a mainstay in just about every publication in the dark lit field. By way of Zebra, you also published a fair number of horror novels. Do you have a preference for the short form over the long form — or vice-versa — from the perspective of both reader and writer? You do both quite adeptly. Do you find the disciplines for writing short fiction significantly different from writing novels?

RK: By nature, I’ve always been a short story writer. The compact form seems to suit my storytelling style extremely well. There’s not a lot of fluff and filler involved; a scaled down plot, flesh and blood characters that are real, but not with every mole, freckle, and scar described, and preferably a twist end, sometimes ambiguously so. When I grew up as a child, and well into early adulthood, I would listen to my Grandmama Spicer spin tales of family history, Civil War lore, and horrifying stories of local ghosts and cryptids. They were always very short and compact, but told in a way that conveyed an encompassing sense of place and time. Maybe subconsciously, I’ve emulated that in my prose. I do enjoy doing novel length fiction, and the disciplines are very different. Writing a novel is like taking a two week road trip from the east coast to the west. A short story is more like a fast and fun day trip. Personally, I find a short story much more pleasurable and rewarding. 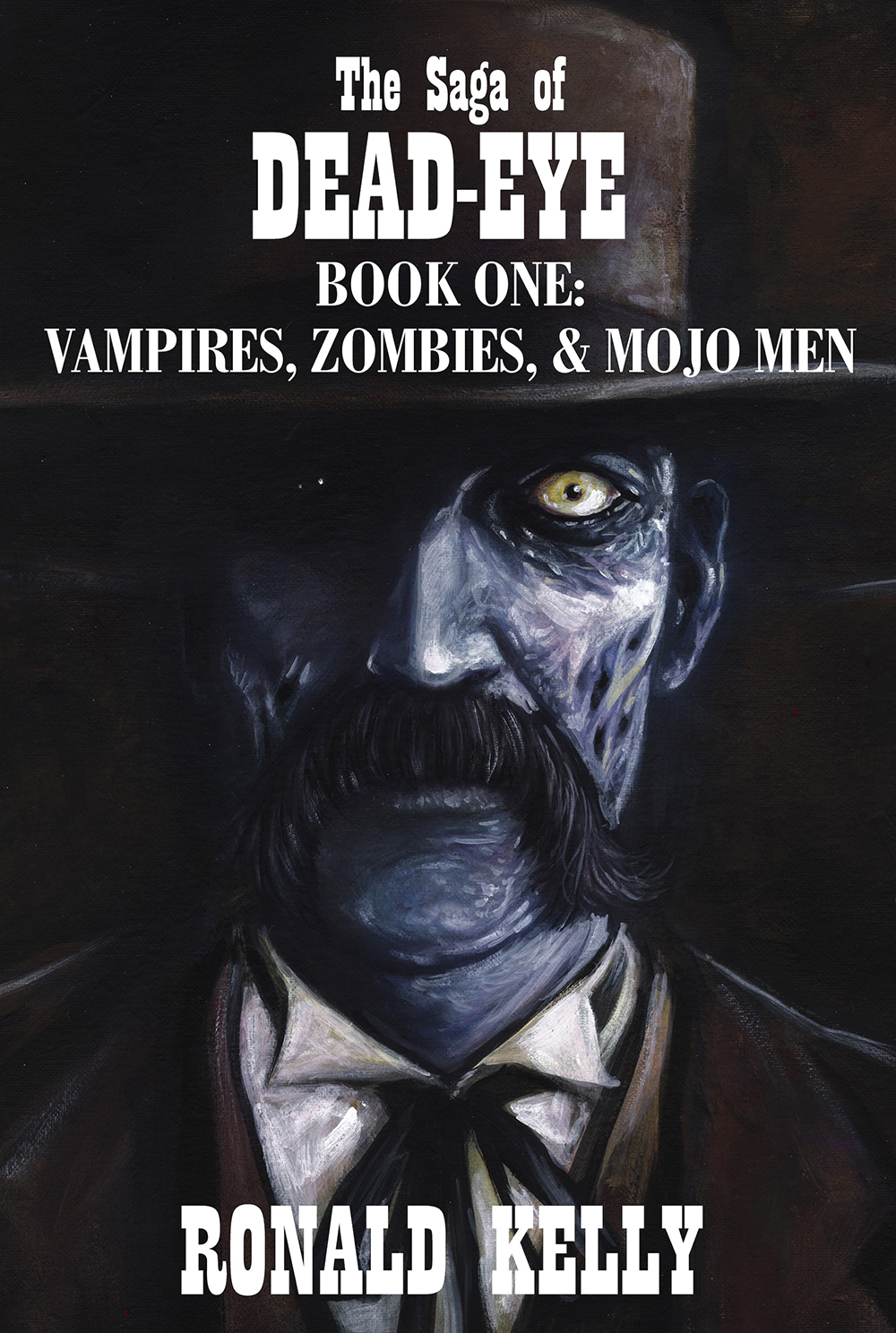 GC: After Zebra crashed and burned in the mid-1990s, you retired from writing, or at least publishing, for several years. During that period, did you produce any fiction? Or did life carry you in a wholly different direction? I know many — including me — were happy to see you blaze back into action a few years ago. After the hiatus, did the writing/publishing world seem a much different animal to you?

RK: When the Zebra horror line shut down in 1996, I found myself in limbo. Writing mass market novels had been my job for six years and suddenly I was unemployed. Since the “H-word” was pure poison and no publishing houses were reading or accepting that genre of fiction at that point in time, my agent suggested that I write anything but horror. So, I tried my hand at several other genres, including detective and romance, even children’s books, but nothing panned out. So, I got bitter and discouraged. I flat-out stopped writing for ten years. And, even worse, I stopped reading horror as well. I laced up my steel-toed boots and punched the clock… went back to the factories. I pretty much figured that I’d had my shot at a writing career and blew it. So, I worked blue collar jobs and raised a family. It wasn’t until 2006 that I decided to come back to the horror genre and give it another try. As for how the publishing world differed from before, it was pretty much completely different. The sheer mechanics of the writing process had progressed far beyond where I had left it. Where you had to type and submit multiple copies and send them off via snail mail before, everything was submitted digitally through email and where it once took weeks or months to receive a reply, you could be accepted or rejected in a matter of minutes. Also, social media made it easier to promote your work and communicate with readers, fellow writers, and potential publishers. Sure, there are pros and cons to Twitter and Facebook — sometimes more negativity than positivity— but for the most part it’s a useful tool to get folks interested in your work and build an audience of readers. 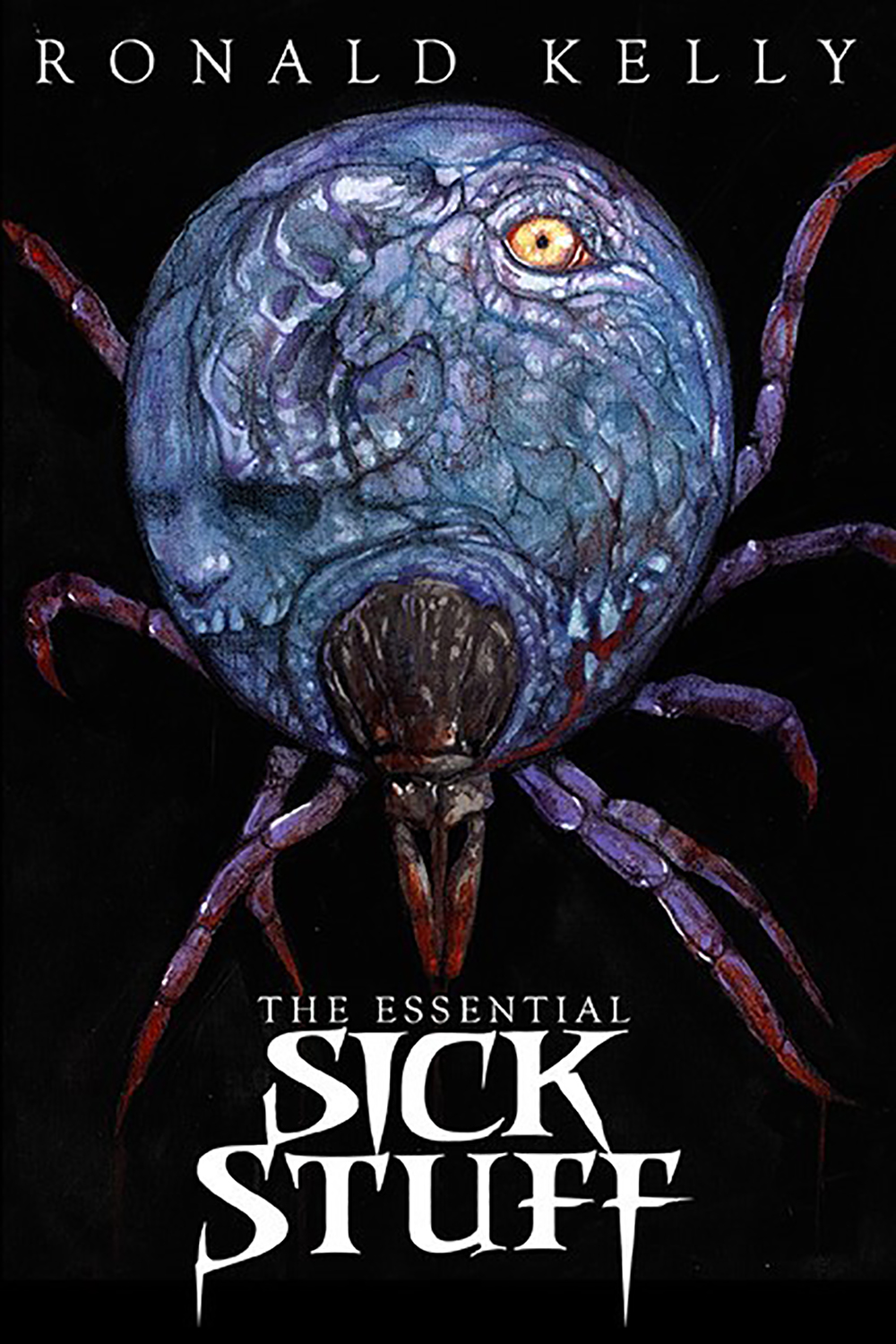 GC: Your influences have ranged from the classic horror and science fiction movies that so many of our (increasingly ancient) generation grew up with to the works of Edgar Allan Poe, H. P. Lovecraft, Richard Matheson, Stephen King, and many others (not that I’m saying you’re old or anything — no, no, not at all!). Your recent collection, The Haunt of Southern-Fried Fear, carries a strong EC Comics vibe (and to me, especially with the art you’ve provided for the book, something of a Hugh B. Cave/Lee Brown Coye feel, such as with Murgunstrumm & Others). So, it seems you still have an affinity for the “old” treasures. Once you returned to the writing fold, so to speak, did you find yourself moved by any new and different dark influences? Do you have any recent favorite books and movies?

RK: When I was debating on whether or not I actually wanted to write horror again, there were two authors — both totally unfamiliar to me — that pretty much made my mind up for me. After I read Brian Keene’s The Rising and James Newman’s Midnight Rain, they really ignited a creative fire in me and I thought “Hey, I think I can do this again!” And I found that I actually wanted to. So I attribute my desire to come back into the fold to Brian and James. As for recent books I’ve enjoyed, there are almost too many to mention. I really enjoyed Rich Chizmar’s Chasing the Boogeyman and the Gwendy series he did with Stephen King. Also, about anything by Keene, Jonathan Janz, Wesley Southard, Hailey Piper, Laurel Hightower, and Eric Larocca. There are dozens of others, too. The horror genre is so full of creativity and energy these days, the selection of different styles and voices is hard to keep up with. As for movies, I don’t watch many theatrical horror flicks these days, but some of the streaming services like Netflix are putting out some good horror, like Malerman’s Bird Box and Lebbon’s The Silence. 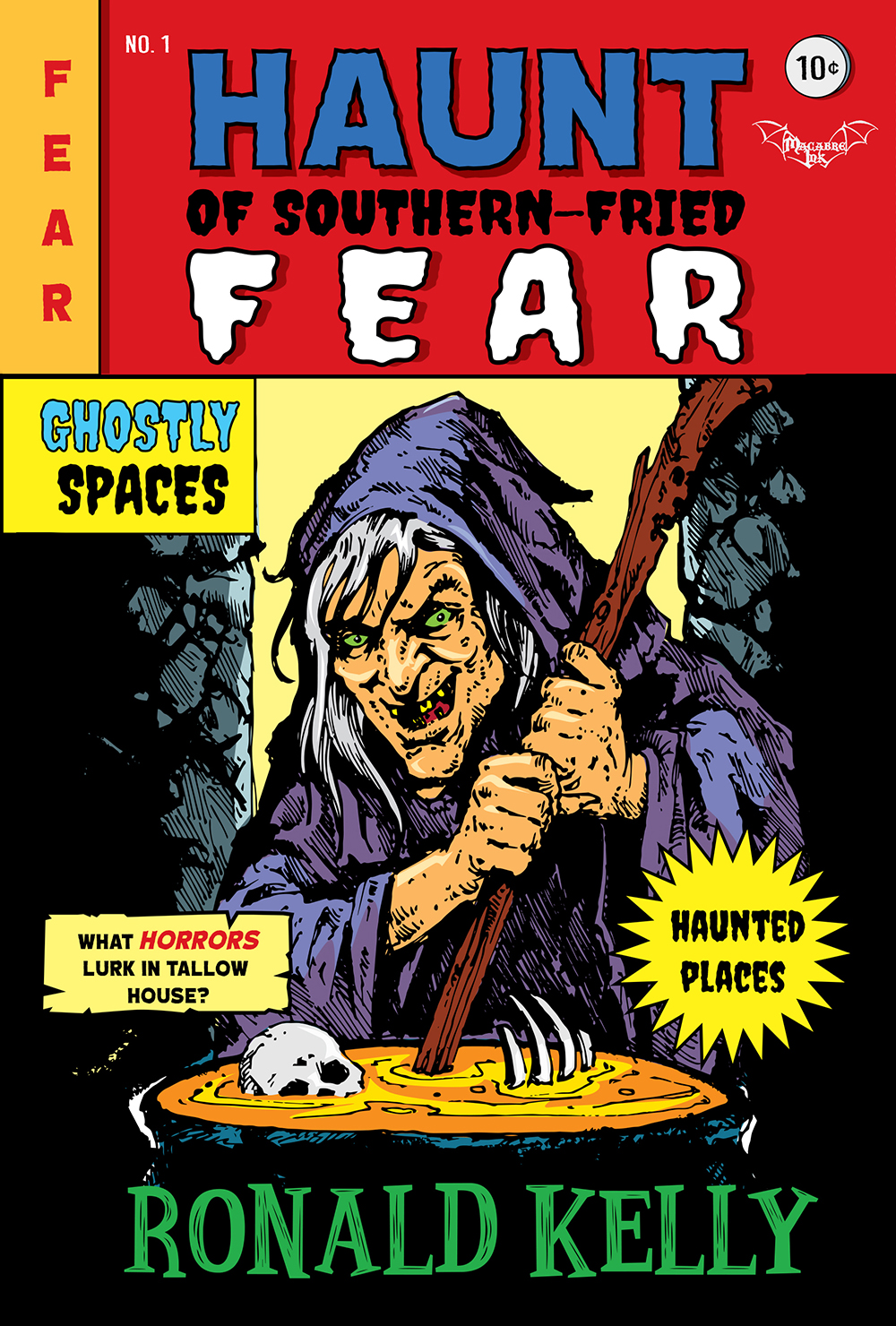 GC: I purchased The Haunt of Southern-Fried Fear literally a day or two before Silver Shamrock blew up. After your experience with Zebra, did you by chance get a nasty sense of of deja-vu? (I expect I would have.) Am I right in thinking you’ve come to an arrangement with Crossroad Press (with whom I’ve had consistently excellent experiences) for your work that would have otherwise come out via Silver Shamrock? Anything you can tell us about your upcoming stories and books?

RK: The fiasco with Silver Shamrock wasn’t as heartbreaking and chaotic for me as it might have been for other authors. I’ve gone through these sudden, unexpected publisher shutdowns seven times during my writing career, so I reckon I’ve kind of grown accustomed to the chance of it happening at any given moment. Nothing is guaranteed from day to day in indie publishing. Sometimes it’s financial woes or low sales due to disinterest from potential readers. In this recent case, it was an extremely negative reaction to a social media promotion. Luckily, the Davids at Crossroad Press contacted me shortly after SS announced their demise and the transition of The Essential Sick Stuff, The Saga of Dead-Eye, and the Southern-Fried collection series from one publisher to another was relatively smooth and painless. Crossroad is in the process of making all three available in ebook and paperback, and eventually audiobook… something that Silver Shamrock never seemed to have a genuine interest in pursuing. As for upcoming books, Dead-Eye, Book Two: Werewolves, Swamp Critters, & Hellacious Haints should be released sometime this summer, along with a new edition of my extreme horror collection, After the Burn, illustrated by Zach McCain. Plus, Stygian Sky is releasing my memoir/writer’s guide, Southern-Fried & Horrified, in September. 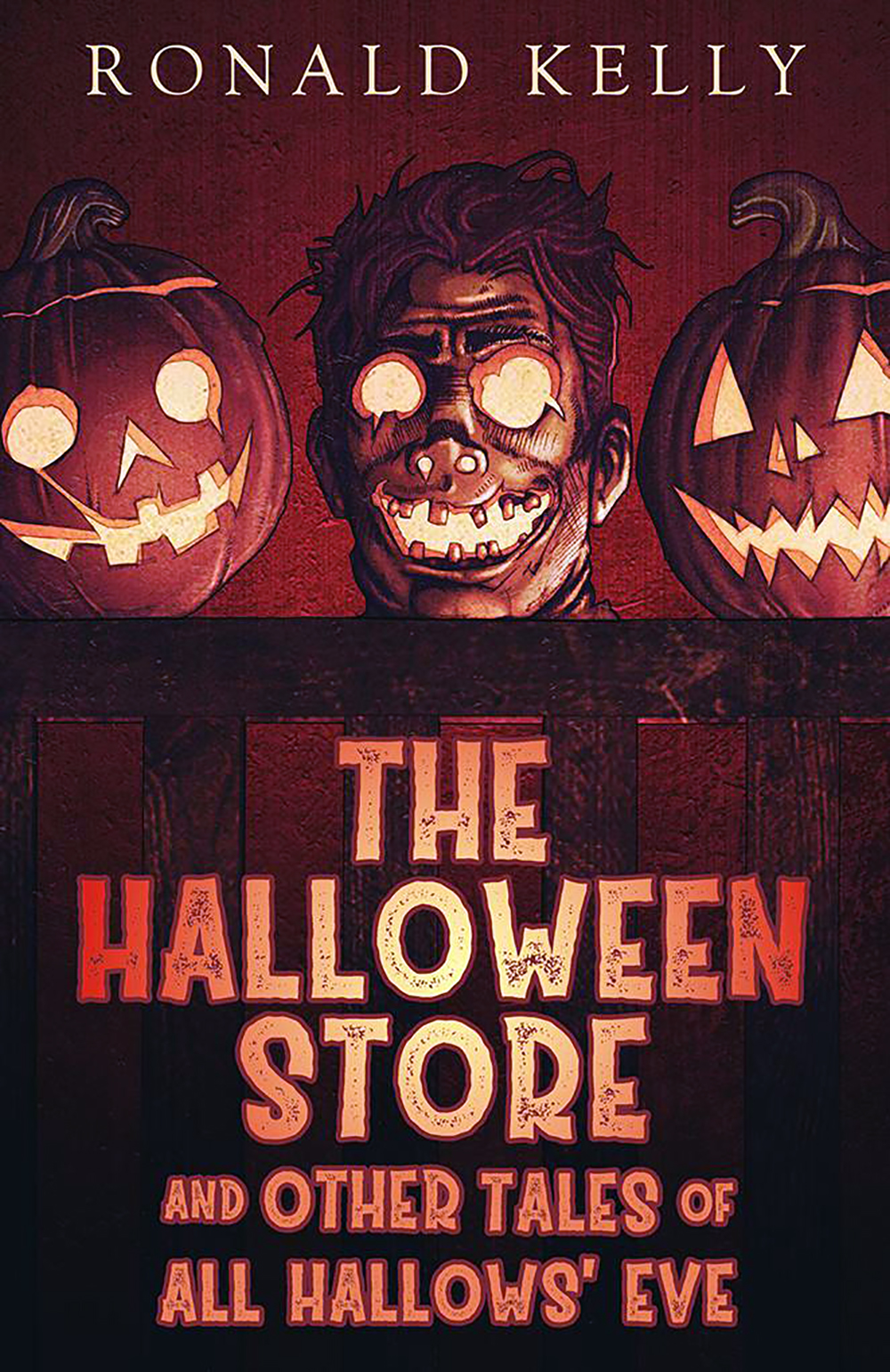 GC: Most of today’s horror authors are finding career success in their twenties and thirties. Your recent surge in popularity seems to be taking place during your early sixties. Do you think there is a reason for that? And, where do you see yourself and your career in ten or twenty years?

RK: You know, there was a long stretch of several years after I returned in 2006 where very few readers were familiar with me or my work. It was discouraging. At one point, I seriously considered hanging it up because of lack interest. Then folks started discovering Fear and reading The Essential Sick Stuff and The Halloween Store, and they began to get a hankering for old fashioned storytelling. I don’t know… maybe they grew a little weary of all the gloomy, angst-ridden fiction that was prevalent and craved a bit of fun and nostalgia in their horror. Maybe it just took thirty-six years for me to reach a point where I had the confidence to write what I truly wanted to write; traditional tales that serve as comfort food for those who have a true love for old-school horror. Yes, true, I’m nearing retirement age, and that’s when many writers tend to slow down and take it easy. It seems to be the opposite for me. I have more story and novel ideas in my head, more projects in the works, than I ever did during my younger days. If I can hang in there, I’m planning on serving heaping helpings of Southern-Fried horror for another decade or two. If the readers keep hankering for what I have to offer, I’m more than happy to oblige them.
GC: Thanks, Ron — it has been a pleasure!

In the next Graveside Chat, look for celebrated author Jeffrey Thomas to offer his unique insights into thrills, chills, and mind-numbing terror!