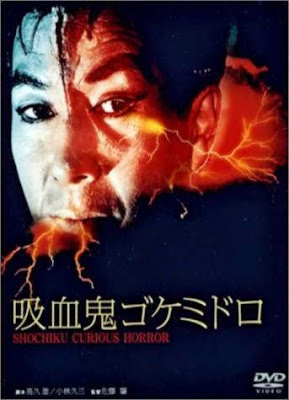 Most afternoons on my drive home from the office, I listen to Allan Handelman on the local talk radio station (WZTK, 101.1 FM), whose show covers a wide spectrum of subject matter, from politics to rock-n-roll, mainly because it's a little more thoughtful than the shallow, earache-inducing noise of brainless bozos like Michael Savage and Neil Boortz on the same station. This afternoon, Allan's guest was Chris Alexander, the current editor of Fangoria magazine, which was an old favorite of mine back in the 80s. Callers were encouraged to challenge Chris to identify old horror movies they might half-recall from days gone by...and if they were lucky, maybe even stump him. I was enjoying listening to the many descriptions of familiar old movies and Chris promptly identifying them, so I figured, well, if I could get through, just maybe I could stump him. Surprisingly, I got on the show with little trouble, summarized one of my least-favorite old Japanese horror movies—about the survivors of a plane crash being terrorized by a parasitic blob from outer space that takes over its host by splitting his skull and oozing into his brain—and by gummy, managed to stump ye editor right good and proper. The movie, of course, was the 1968 Shochiku monstrosity, Goke, Body Snatcher From Hell, which I saw on the drive-in circuit sometime in the mid '70s. It's obscure enough, for sure; I don't believe there's an authorized domestic DVD release, though I do have a VHS copy lurking somewhere in the vault.

With cheap special effects, lurid cinematography, nihilistic tone, and infuriatingly unlikeable characters, Goke is one of those movies that stands out because of its high annoyance factor; I'd even go so far as to say its glaring flaws are its most endearing feature. Hopefully, it'll get a respectable DVD release one of these days, and I can review it on my Daikaiju site. Alas, no prize for stumping Mr. Alexander, but I did get a whole heaping helping of pleasure getting into some horror on the radio. Thanks, Allan.
Posted by Stephen Mark Rainey at 8:18 PM

Hey man...drop me an email at blackglovekiller@gmail.com and I'll get you a prize for the quality stump!