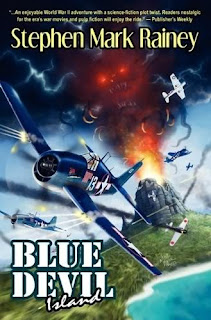 Hooray for Marietta Publishing, who has released my novel, Blue Devil Island (originally published in hardback by Thomson Gale/Five Star, 2007), as a trade paperback. With gorgeous cover art by M. Wayne Miller, neat interior graphics (including insignia for the Navy and Marine units in the novel—a nice touch I did not know about), and a reasonable price ($15.99, but many vendors offer discounts), this has got to be one of my favorite book releases ever. It's in stock (online) at Amazon.com, Barnes & Noble, Books-a-Million, and other vendors; may be available at select brick-and-mortar stores.

Autumn 1943: the beginning of the American offensive against the Japanese in the South Pacific. Just west of the Solomons lies a remote desert island called Conquest, where the U.S. Navy stations a new fighting squadron, led by Lieutenant Commander Drew McLachlan, an ace pilot and veteran of the Battle of the Coral Sea. The Blue Devils soar into combat against their enemies—both known and unknown. The squadron's island home may not be secure, for in nearby volcanic caves, McLachlan finds evidence of habitation by unknown natives—natives that resemble no known living race. As the Solomon campaign enters into its final skirmishes, the Japanese at last turn their attention to Conquest Island. Now the Blue Devils find themselves the target of an overwhelming assault by the desperate Imperial Japanese forces—and a mysterious, predatory force that leaves mutilated victims as the only evidence of its presence.

More info is available at my website: Blue Devil Island at The Realm of Stephen Mark Rainey

If you enjoy any or all of the following, this one is for you: historical fiction, scary stuff, action-adventure, engaging characters, a bit of blood and guts, monsters, perhaps a hint of social commentary, not even a whiff of fluffy friggin' romance. Do check it out — you can order it from Amazon.com here.
Posted by Stephen Mark Rainey at 5:54 PM

Yay. I love this book. Hope you sell a bunch.