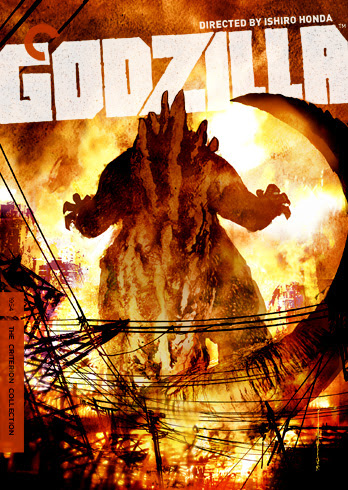 The original, 1954 Japanese version of Godzilla is surely my favorite monster movie ever. Maybe even my favorite movie ever. While most westerners equate Godzilla movies with hokey monsters, model cities, and bad dubbing, the original Japanese film transcends the genre that birthed it and, in its day, transformed that genre into something altogether new and different. Countless words have been written about Godzilla being a metaphor for the nuclear horror Japan experienced at the close of World War II, so I'll not belabor that point. While the U.S. version, with its added footage of Raymond Burr, retained at least a portion of the original's power, the Japanese version may be viewed through the same "serious" lens one would view Japanese classics such as Seven Samurai, Rashomon, and Ikiru, and find it in no way wanting. Despite some crudities in its special effects, the film's grimness and documentary-style narrative imbues it with a sense of real-world horror that no other monster film, Japanese or otherwise, has ever achieved. Its limited U.S. theatrical release in the early 2000s received almost unanimous accolades from critics and, in a sense, opened a lot of eyes to a product that most American viewers only thought they knew.

The intersecting stories of Emiko Yamane (Momoko Kochi), Ogata (Akira Takarada), and Dr. Serizawa (Akihiko Hirata) propel the drama, but Godzilla is the fourth character in this relationship, affecting and influencing the human characters' every decision. Emiko and Serizawa are engaged, their marriage having been arranged when they were young; however, Emiko and Ogata are in love and wish to marry, but both have deep feelings for Serizawa and have no desire to hurt him. Serizawa, in his scientific research, has discovered an unusual energy force with the power to destroy oxygen molecules, and his dilemma is whether to use it against the monster and risk it falling into the hands of politicians — the one thing he fears more than Godzilla — or allow Godzilla to trample Japan unimpeded. It's his sense of honor as well as his compassion for Ogata and Emiko that motivate him to make the decision he does.

Tangential to the "love triangle" is the character of Dr. Yamane, Emiko's father and Japan's preeminent paleontologist, who fervently opposes the government's position that Godzilla must be destroyed, preferring that the monster be studied for its unique in its ability to survive both untold millions of years as well as massive doses of radiation from hydrogen bomb tests. Yamane is less susceptible than Serizawa to Ogata and Emiko's efforts to convince him that Godzilla must be destroyed, despite his recognition of the fact that Godzilla might inflict upon Japan a nuclear holocaust far worse than Hiroshima and Nagasaki. Only toward the end, after Tokyo has been reduced to ashes, does he appear to be reconciled to the destruction of the greatest laboratory sample the world has ever produced.

The American version retains the better part of the original plot, but too much of the character development has been edited out to make room for Raymond Burr for the story to come across as more than melodrama. That's not to say the scenes with Raymond Burr, directed by Terry Morse, are totally superfluous; certainly, for American audiences of the day, relatively soon after World War II, having a recognizable American star to participate in the drama, in effect becoming the audience's eyes and ears, served to make the original Japanese story more palatable. While the added scenes are occasionally too obvious — especially when stand-ins are used for the original Japanese actors — they are played very straight, and oftentimes blend in surprisingly well. For all its flaws, the Americanization did allow much of the original to remain undubbed, and Burr's scenes occasionally add an additional touch of suspense, such as during the storm when Godzilla first appears on Odo Island.

While most American audiences would probably never know the difference, Godzilla's rampage in the original Japanese version is far superior, in that Tokyo has been wonderfully reproduced in miniature, with Godzilla making a logical and accurate progression through the city. To Japanese audiences, the reshuffled scenes must appear quite confusing. Having Godzilla attack at night was a wise move, since the darkness adds immeasurably to the sense of menace and also offers the practical advantage of concealing flaws in the effects. Regardless, Eiji Tsuburaya's work in this film is masterful, particularly when one considers the limited budget, the time constraints, and the fact that it was all new and largely experimental at the time.

Akira Ifukube scored the film and also created the ominous sound effects for Godzilla's roar and footsteps. Many of the themes that fans explicitly identify with Godzilla originated in this film, and it's all the more remarkable that Ifukube composed the score without having seen a frame of film. He was instructed to write music for "something big." I believe he succeeded beyond anyone's wildest expectations.

The Criterion Collection DVD release is a true masterpiece. The Japanese and U.S. versions come on two separate discs (single Blu-Ray disc), and each film features a commentary track by noted author/film historian David Kalat. Extra features include interviews with actor Akira Takarada, Godzilla suit actor Haruo Nakajima, effects technicians Yoshio Irie and Eizo Kaimai, soundtrack composer Akira Ifukube, and film critic Tado Sato. The prints of both versions have been painstakingly restored to near-mint condition, and the soundtracks have never been more impressive. I couldn't give a higher recommendation to the presentation of these films. Some have complained about the art on the packaging, but I find it quite effective, if not spectacular. While the Criterion release is no doubt the definitive release of Godzilla, the Classic Media edition (previously reviewed here) at least offers several noteworthy extra features. It pays to own both.
Posted by Stephen Mark Rainey at 10:09 PM