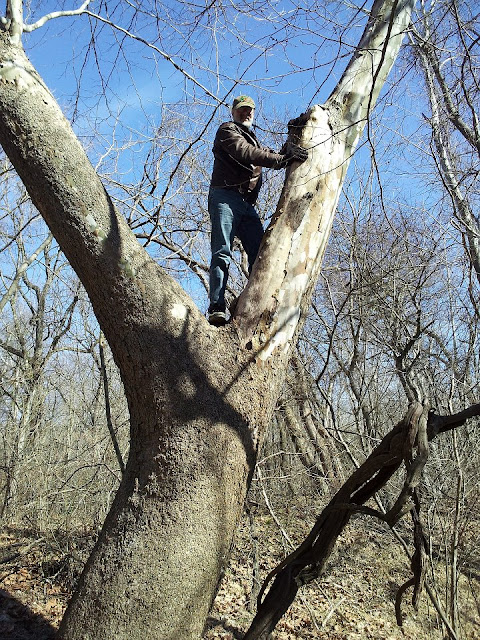 Brugger and I headed up to Martinsville last night to visit Mum and spend some time kicking around the place today. I needed to do maintenance on a few of my geocaches, so I did that early in the morning, and then the two of us headed down to the mushroom trail along the Smith River, back behind Mulberry Road, where several of my caches lurk, waiting patiently to ignore unsuspecting passersby. A bit chilly and breezy out there, but not unpleasant for a hike.

The pic at left shows an old dude at my cache called "One Guess" (GC1QG05)... meaning you have one guess where to find the thing (and, oh, what a giveaway). I've had to replace that sucker a couple of times previously (apparently a hawk took a liking to the hide's location), so I was glad to find it in good condition today.

When I was a lad in junior high school, my friend Charles Lewis lived in a neighborhood that, by road, was fairly distant, but if you took the proper shortcut, it was just over the river and through the woods. From the end of his road, we knew there was a trail along the Smith River, which reputedly went out to Forest Park Country Club, about four miles away. One fine Saturday we decided to try out this trail on our bikes—pioneer spirit and all that, don't you know. Anyway, there's some rugged terrain out there, and I recall we struggled up and down a lot of hills, over creeks, through briers, all through this territory into which neither of us had ever ventured. Nowadays, there are a number of factories along the river and some houses not too far from the trail; back then, there weren't quite as many of either, and it seemed the remotest, most isolated place I'd ever gone. I remember emerging from the woods into a big meadow, which at first I jubilantly took to be one of the fairways at our destination. Nope. A little discouraged but certainly unwilling to go back the way we had come, we pressed on. It seemed like forever later that we finally saw a house up on the hillside to our left, away from the river.

Okay, we figured. There's a road up there, and since I knew all the roads in the neighborhood, it seemed the simplest solution to get back into familiar territory. We started up the hill into the yard.

A mean, gruff voice. A dude accompanied by a not-so-weenie dog, obviously displeased to see a pair of bedraggled young teenagers attempting to cut through his yard.

"Can you tell us what road that is?"

The burly dude looked at us and laughed. "Y'all are lost, aren't you. Well, good luck."

And that was that. No way we were getting past an asshole and his dog. So we returned to the trail and pedaled on. Finally, days and days later, it seemed, we began to see familiar signs of civilization, and...at long last...the golf course at Forest Park. (In reality, we'd been less than a half mile away when the mean old bastard shooed us off.)

In later years, a big field along the river back there, which locals called Belmont, became the site of some pretty wild parties. I attended several in my college and post-college days. Can't say as I rightly remember anything about them, though.

Over the years, I felt a certain haunting nostalgia to revisit that old trail along the river, so probably a decade or so ago, I took it to heart to go back. There's some fine hiking there, to be sure, with numerous parallel and intersecting utility trails—clearly frequented by folks on motorcycles and four-wheelers, but in all the times I've been out there in recent years, I've never seen another living soul. Today, Brugger and I ventured farther along the river than I'd gone before, and it was certainly an interesting enough trek. Lots of signs of very old industry there...dating back God knows how long. Possibly since before I was born. Old pipes along a steep hillside completely enveloped by exposed tree roots. Electrical boxes that must have existed before electricity was discovered. Definitely some fun places to hide new caches—particularly of the more, er, challenging sort favored by many NC Triangle geocachers—so I expect I will be making a return trip in the not-too-distant future. It's a place of joy worth spreading. 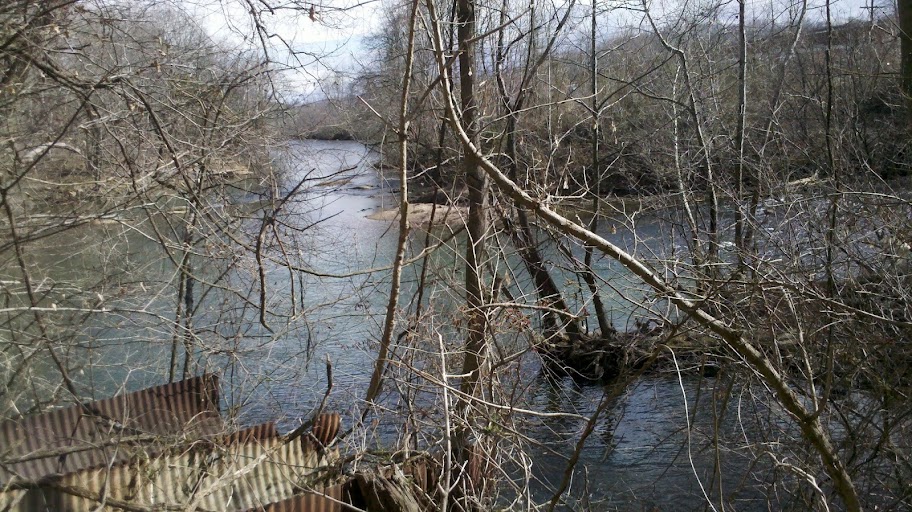 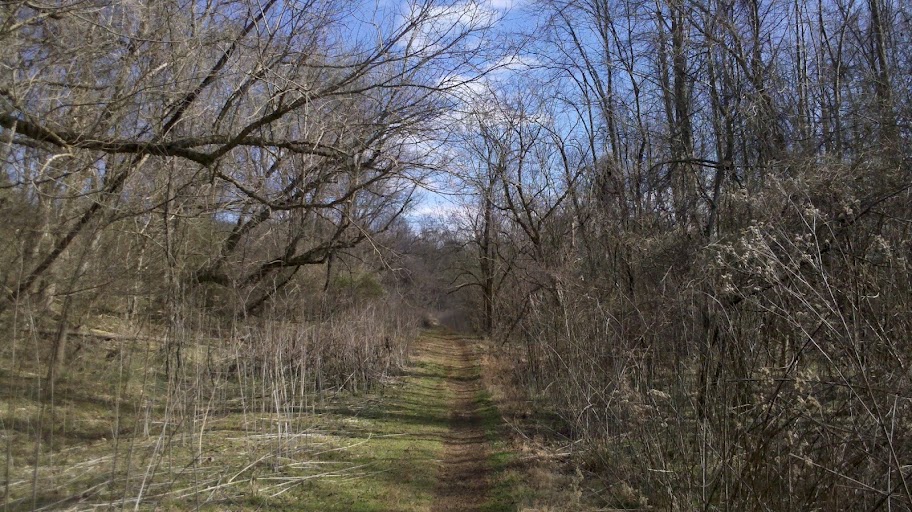 The mushroom trail leading toward the legendary land of Belmont 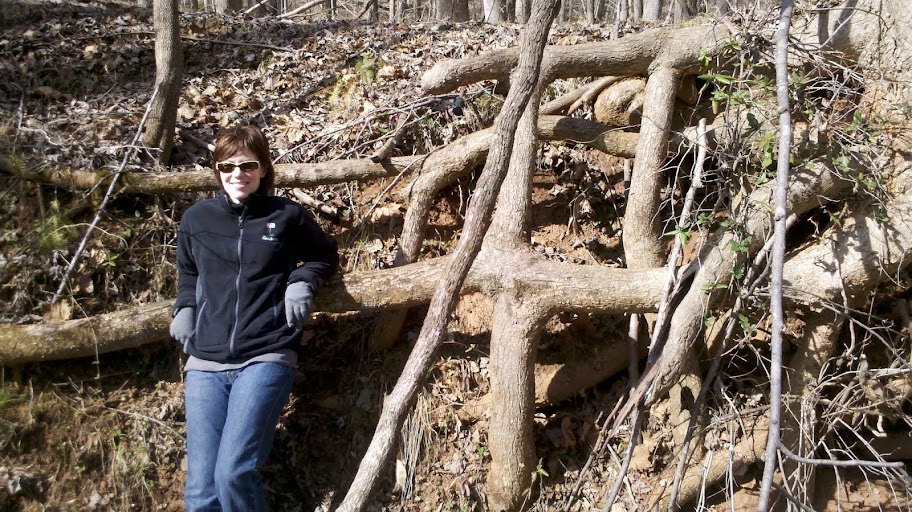 Do not cross this woman. 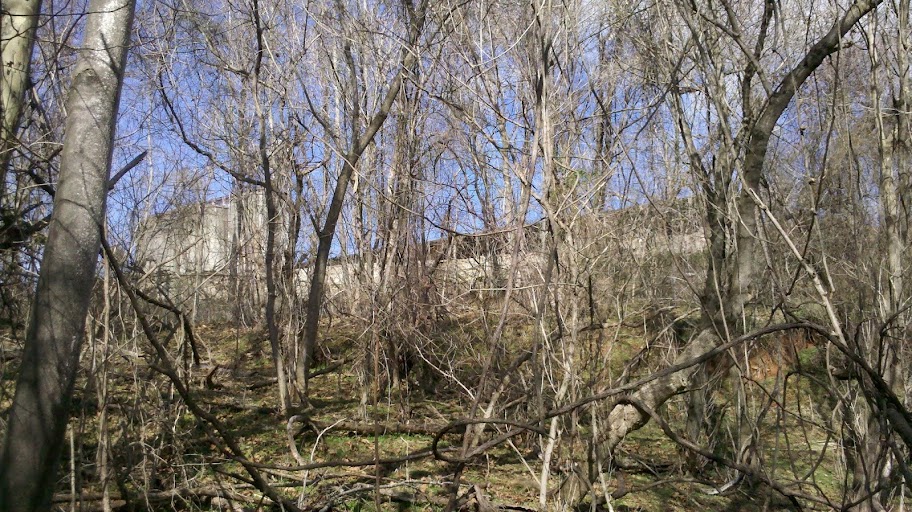 View of the dilapidated Redd Level Plant near the Smith River 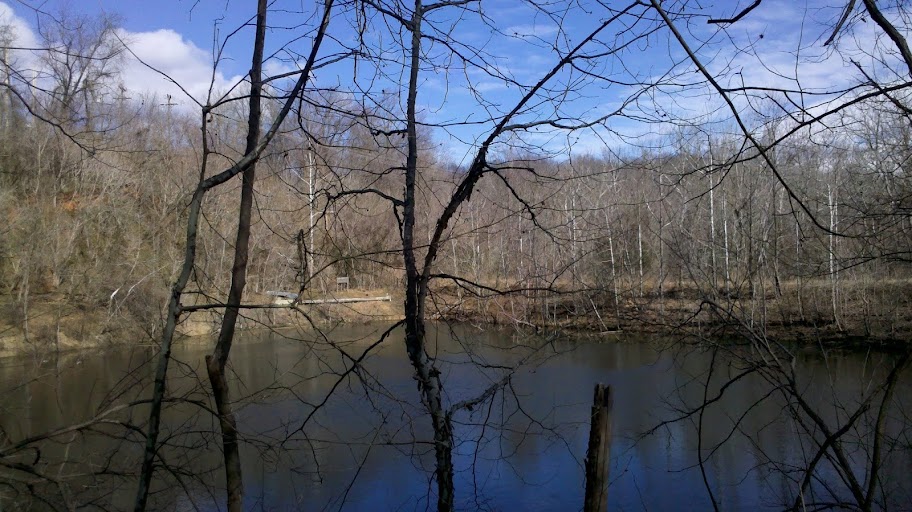 Vicariously enjoyed your adventures (both the one years ago and yesterday). Great photos! You guys are the epitome of rugged. :)