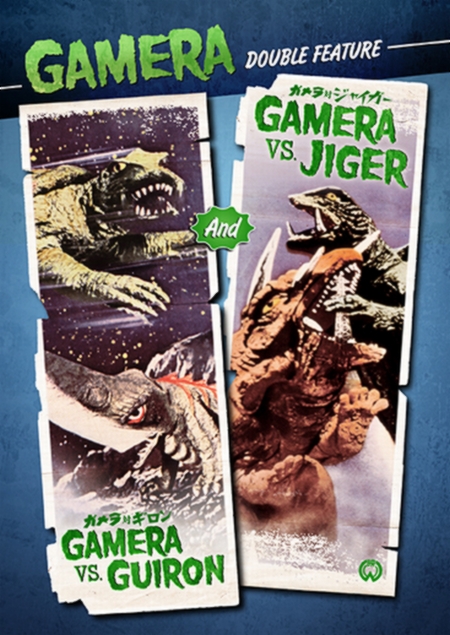 Gamera vs. Jiger is hardly a return to the superior style of earlier Gamera movies such as Gamera vs. Barugon, but something about it just seems a little less messed up than the two preceding films in the series (Gamera vs. Viras and Gamera vs. Guiron). Or maybe it's just my imagination....

The picture starts out with all of Japan preparing for Expo 70 in Osaka, a landmark event for the country, certainly for its ailing economy. Meantime, out in the remote Pacific, on Wester Island, a giant idol has been found, and Japanese scientists want to remove it and put it on display at the Expo. First, the Wester Island people protest, to no avail; but then Gamera comes round and interferes with its excavation. However, a nearby volcano conveniently erupts, drawing Gamera away to feast on the flames. The statue is transported to Osaka, but people in close proximity to the idol begin to fall ill, and scientists determine that the statue's shaft emits high-pitched sound waves, which upsets people's equilibrium.

Speaking of upset, big ugly monster Jiger now appears on Wester Island, clearly pissed about the statue's removal. Apparently, the unearthed statue's high-pitched emanations are enough to send ugly beastie into quite the frenzy. Gamera comes back around to whoop the critter, but Jiger unexpectedly zaps big turtle with quill-like projectiles that pierce its arms and legs, preventing it from drawing its limbs into its shell. Jiger flies off by way of jet propulsion units behind its jaw (an accessory that no self-respecting monster should do without). Gamera finally manages to extract the quills and gives chase. Another battle ensues, but now Jiger uses its tail to "sting" Gamera—injecting a baby Jiger into Gamera's bloodstream. Old ugly then locates the statue and throws it into the sea, putting an end to the noise that torments it. Enter our juvenile protagonists and their handy-dandy mini sub. Using the sub, they make their way into Gamera's innards via its mouth and finally locate the baby Jiger, which is lurking in the turtle's lung. The kids turn on their transistor radio and the sound waves of the resulting static put an end to the baby Jiger.

The kids make their escape, and Gamera revives to fight old ugly yet again. Gamera retrieves the sunken idol from the ocean and uses it to whoop Jiger once and for all. The end.

Gamera vs. Jiger, like its immediate predecessors, suffers from a miniscule budget, though a special effects scene or two manages to rise above the film's limitations. The idol itself is creepy looking, and Jiger itself, while remaining well within the cheezy zone, has a bit of that cool reptilian monster thing going on—more reminiscent of Barugon than of Viras or Guiron (not that this is too grand a compliment). There's a bit more urban destruction than we've seen in a while, and—yay!—no stock footage. The story is still very much aimed at the younger set, with children playing pivotal roles.

The 2010 Shout! Factory release (a double-bill with Gamera vs. Guiron) is another winner, with superb video and sound quality, featuring the original Japanese soundtrack as well as the Sandy Frank dub (which is more grating than the Wester Island statue's sound wave emanations). Extras are sparse—primarily promotional still galleries—but the first-class presentation of the films (two for the price of one) is sufficient to make this a more-than-satisfactory DVD purchase.
Posted by Stephen Mark Rainey at 11:01 PM