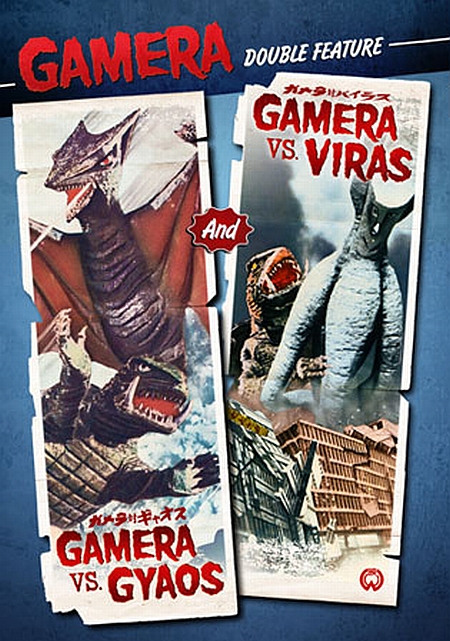 Unbeknownst to its people, the earth is about to come under attack! As a bizarre cluster of striped spheres hurtles toward the unsuspecting planet, Gamera suddenly comes round, pops the spaceship a good one, and down it goes. Before their demise, the aliens on board report back to their home world that they have an enemy on Earth—the big flying turtle.

Cut to Japan, where we meet Jim (Carl Craig) and Masao (Tôru Takatsuka), a couple of precocious Boy Scouts who are visiting an aquarium with their troop. They finagle their way into an experimental mini sub and take it cruising around the bay. Under the sea, they discover Gamera, who engages them in an amusing race. Suddenly, another alien spaceship appears and unleashes a force field beam that entraps the monster as well as the boys. Jim and Masao manage to get free, but the aliens examine Gamera's memories (by means of stock footage) and discover its affection for children—a weakness they intend to exploit.

The aliens capture Jim and Masao and take control of Gamera by means of a brain-wave control device. Gamera...again via stock footage...inflicts serious damage on some miniature sets. Aboard the alien ship, Jim and Masao encounter a grotesque, squid-like being, which they assume to be another captive of the aliens—only to learn that it is, in fact, the alien leader. The ingenious younsters figure out how to make Gamera do the opposite of what the aliens order it to do, and so it attacks the spaceship, saving the boys and forcing the aliens to rethink their plans of conquest. In desperation, the squid-like alien decapitates its minions—all of which transform into squid-like critters and then combine to create one gigantic, malevolent Viras monster. For the final ten minutes of the movie, Gamera and Viras battle to the death, and in the end...shock of shocks...the big turtle again emerges victorious.

If this movie sounds ridiculous, it's because it's a ridiculous movie. While none of the preceding Gamera films were shining examples of cinematic sophistication, this is the first of the series to cast off its shackles of inhibition and shamelessly shoot straight at the kiddie market. That's not to say Gamera vs. Viras isn't reasonably entertaining for the older set; you just need to be a member of the older set with more than a few remnants of the ten-year-old left lingering in your psyche. Then again, I'm really not so sure. As I've said many times before, as a ten-year-old (and even younger), I wanted my daikaiju played straight. I wanted merciless monsters, hard-boiled heroes, and exquisite destruction. Nothing irked me more than juvenile protagonists and muppet-like monsters. To a large extent that's still true, though in my old age I tend to have a more sporting attitude.

The threadbare budget works against this movie right from the start. The miniatures and sets are sparse, and the cinematography does nothing to disguise the fact. Gamera looks more puppy-like than ever, and Viras treads the line between the wicked and the comical. Stock footage from the previous films comprise a distressing percentage of the film's running time. However, much like its predecessor, this film trusts that its younger viewers can handle it and features one of the most surprisingly violent scenes in all daikaiju history. Once the Viras leader has revealed itself, furious at having been foiled by the earthlings, it uses one of its arms to graphically behead its subordinates—which then grow new squid-like heads that protrude grotesquely from their humanoid bodies. I don't believe I saw this movie until I was well into adulthood, and I recall being quite taken aback (agreeably so, I must say) by this unabridged display of savagery. It's one of those little moments that turn what might be an otherwise forgettable movie into something of a novelty.

Like Gamera vs. Barugon and Gamera vs. Gyaos before it, Gamera vs. Viras received no theatrical release in the United States. Instead, in 1969, AIP-TV released it directly to television under the title Destroy All Planets—no doubt to capitalize on the success of Toho's Destroy All Monsters, which AIP had released to theaters in May of that year. The Shout! Factory double-feature DVD (which also features Gamera vs. Gyaos, reviewed here) presents the film with both the original Japanese language version and the AIP-Titan Studios dub. It's a good buy, to be sure, assuming you're one of those daikaiju completists (like me) with the squid-like heart of a child.
Posted by Stephen Mark Rainey at 4:41 PM