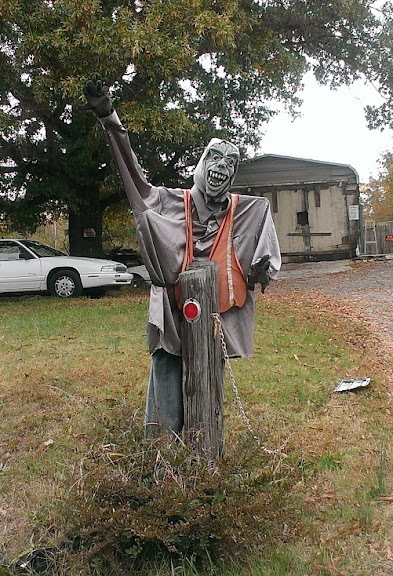 Last night, I headed up to Martinsville to take my mom out for a slightly belated birthday dinner — it was her 80th last week. I traveled, as I often do, by way of the back roads of Henry County, VA, through a little rural community called Sandy Level, which I consider the southern redneck version of H. P. Lovecraft's Dunwich. There's not much to Sandy Level; just a few houses, a business or two, and a rather spooky old church — the Gospel Light Church, for which a relatively new building has been constructed, but the original still stands nearby. Not far from the church, an old fellow I call the Sandy Level Creep stands by the road side with an arm raised in greeting. This is not a Halloween prop (although he may have started that way); he's out there 365 days a year, and he always has a smile and a wave for passersby. Yep, that's him in the photo there. Today, he was accompanied by a tall, bony, shambling figure that sent me a long, hard stare as I drove by; almost certainly one of the local walking dead, of which I'm told there are many. I made it through without mishap, but this is not a place I'd much care to have my automobile break down.

From there, it was off to the Bold Moon Nature Preserve, where a new geocache had been published. I had been there last year (see "Bold Moon at Twilight," November 11, 2014), and I'd found it a slightly creepy and very endearing location out in northeast Guilford County. When I arrived at the trail head this morning, the place was deserted, mine the only car in the little parking area. It's an easy hike out to where the cache was placed, but just before arriving at ground zero, I had to cross Reedy Fork Creek, which in this area is fairly wide and fast-moving. I did so without mishap, but the briers on the other side did a number on my clothes and exposed skin. I was first to find the cache, which made me happy, but I had just signed the log when I heard the sound of someone — or something — approaching. My god, it was more of the undead! A pair of zombies, sometimes known as the McTwins, were having a time of it getting across the river, so I very cleverly goaded them into crossing at the riskiest point. And then — success! — a wee bit of a splash, and one of the carnivorous monsters uttered a few words of dismay, for there were now wet feet. However, because I can be sporting even when it comes to the walking dead, I offered to share in the first-to-find honors on the new cache.

On the way out, the parking area was no longer empty. More like full and then some, as there was apparently a grand opening ceremony about to commence, which struck me as a little odd since the trail opened over a year ago. No matter, it was kind of nice to be coming off the trail as those folks were preparing to get on it, especially since I had a couple of dangerous-looking zombies in tow. There's always a little spectacle involved with that.

A good morning it was. Tonight... our regular monthly supper club gathering, this time at my place, appropriately Halloween-themed, with It's the Great Pumpkin, Charlie Brown in the lineup. Yay!

Bold Moon used to be my land. I gifted it to the county about a decade ago. Our first night on the land was in October, 1985. We had just purchased the land, and we were celebrating by camping out in the woods. Talk about creepy! About 10:00PM, a great horned owl screeched just above our heads! We about jumped out of our skins. Good times, those years on the land. Glad you find the place endearing.