The Geohaunter of the Dark 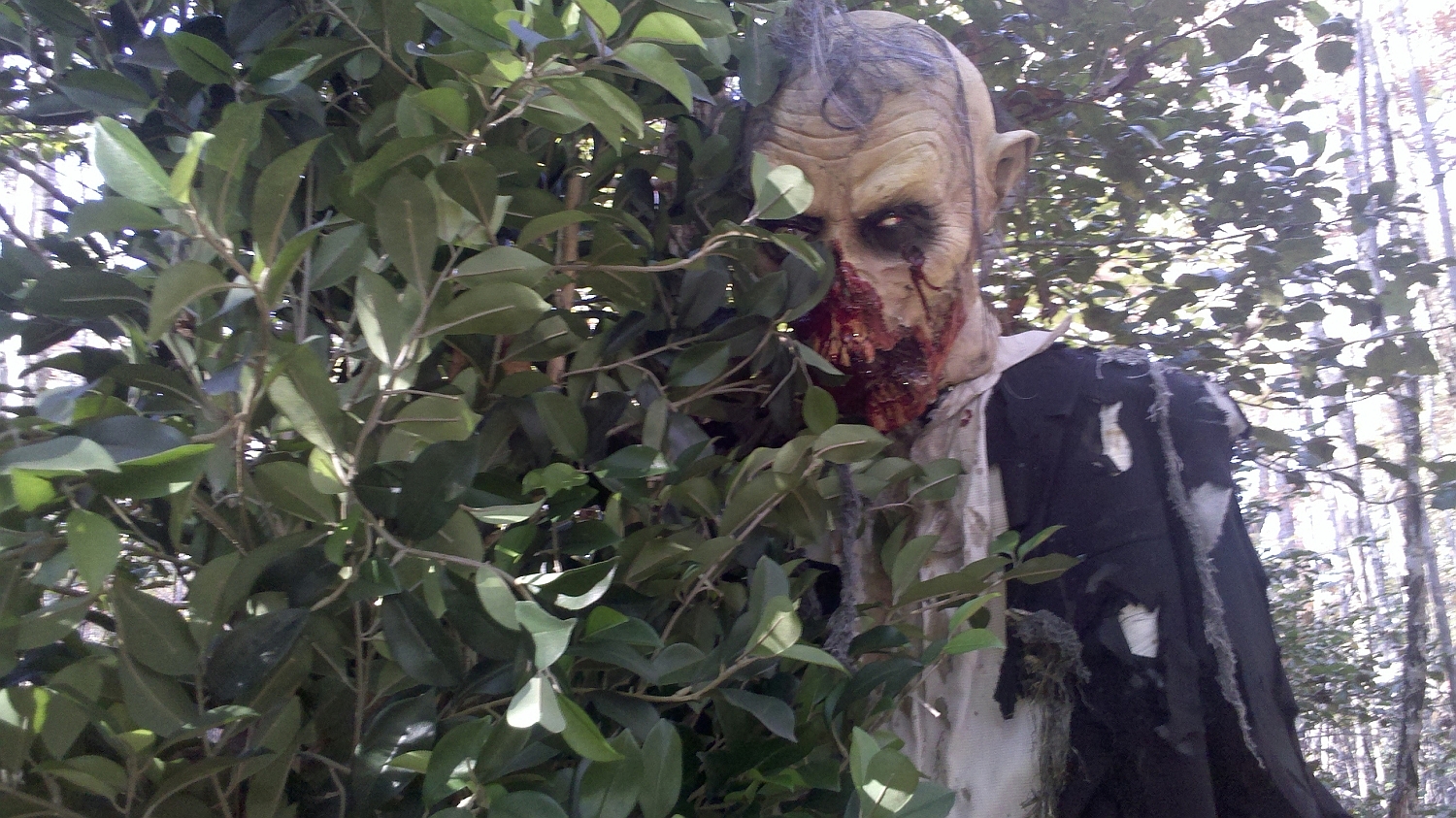 Among local geocachers, it's fairly common knowledge that I write scary fiction. And lots of my readers are aware that I'm an avid geocacher. I've found that, when it comes to creepy, between geocaching and writing fiction, there can be quite a bit of crossover. To be sure, on my cache hunts, I've been taken to all kinds of eerie, atmospheric settings. But I've also placed over a hundred caches in the field, and it's safe to say the better part of them are horror- or dark fantasy–themed. Hey, if I can't scare you one way, I'll try for another. Most of my hides are either in Piedmont Triad of North Carolina or in Martinsville/Henry County, Virginia. If you're within shouting distance of the area, I'd encourage you to come check some of them out. Just for fun, I'll list a few that some of you intrepid treasure hunters would probably enjoy now that it's the Halloween season.

First off, I'll hit you with a little challenge: on Halloween night, hie thee after a night cache. Night caches are great fun, in that they're generally set up so that you use a flashlight to follow a trail of reflector tacks through the woods, often to several different stages before you reach the final cache. I own two night caches — a lengthy, Star Wars–themed cache called "Darkness Falls" (GC14WGB), which I adopted some time ago (see "Darkness Falls Restored," February 24, 2014), and "Dweller in Darkness: The Missing" (GC3G3N7), which is loosely based on my Lovecraftian short story, "Threnody." The latter is the one I'd most recommend for a Halloween outing. It's a fairly straightforward but hopefully disconcerting venture into the woods near Lake Brandt, just north of Greensboro, a round trip of approximately two miles. It can usually be completed in about an hour — so long as you avoid the fate of poor Professor Zann, whose secret you seek to find....

Very close to "Dweller in Darkness" — on the parallel trail on the other side of the lake — I have a cache titled "Hellraiser" (GC4D26T), and you can guess where the inspiration for that one came from. It's not a night cache, but it can be done relatively easily at night, as long as you have a good flashlight (and you don't try to work the Lament Cube you might find in the cache container). This particular cache is located near a large beech tree bearing the inscription "Hell Is Just Ahead," which was apparently carved there in 1962. I don't know whether anyone actually knows the nature of this particular hell, but it's an intriguing locale that was just screaming for a cache to be placed there.

Over at Northeast Park, along the Haw River in northeast Guilford County, you'll find "Day of the Dead" (GC371JE), a two-stage multi-cache, which I placed on the day after Halloween a few years ago. What makes this one personally memorable was that, apparently, there had been a haunted trail set up at Northeast Park for Halloween, and when I went out to hide the cache, all the props remained in place. I seemed to be the only human being in the woods that day, and as I went down the trail, I chanced to bump into the gentleman you see in the photo at the top of this page — not to mention quite a few other horrifying thingummies in the woods. To me, that was more enjoyable than actually going to the attraction as it was intended. The props may not still be there, but the trek out to the stages of this one might provide you with a shudder or two.

At the Richardson-Taylor Preserve in northern Greensboro, there's a trail named the Bill Craft Trail, but to me, and a few other local cachers, it's The Bigfoot Trail. Before the official trail opened, I was caching regularly back in those woods, and I frequently heard something quite large slogging through the marsh, which I naturally assumed to be Bigfoot. Out in those woods, you will find "Bigfoot's Library" (GC2XMG1), which was initially filled with a number of scary books, including some of my own. I don't know whether any of them remain, but the cache itself is still in place. Also out that way is "The Nightmare Frontier (Redux)" (GC3MNR6), which, as you might gather, gets its title from my novel of the same name. 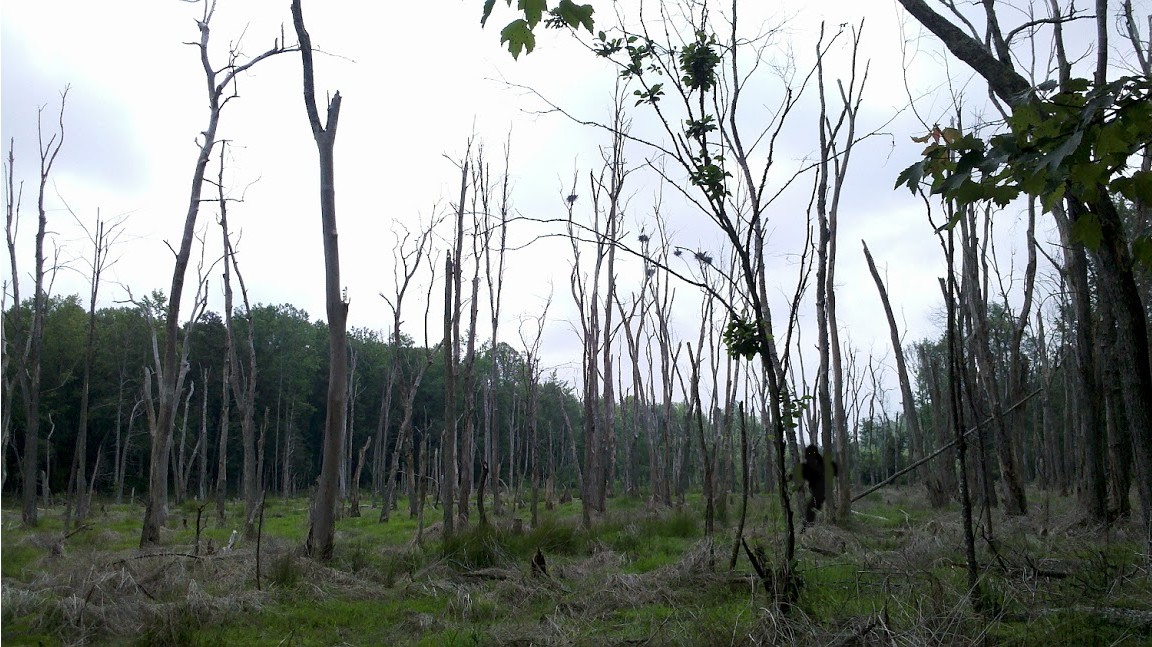 For fans of Twin Peaks, I've placed a couple of different caches inspired by the series. The first is "Fire Walk With Me" (GC35QJY), located in Gibson Park, near High Point. This one poses some slight risk to life and limb, but no one has ended up wrapped in plastic after attempting it, at least to my knowledge. And just off the Beech Bluff Trail, near Lake Higgins in Greensboro, you can hunt "Let's Rock" (GC5W99P) — if you're able to figure out the cache coordinates from the clue on the web page.

One of my favorite but seldom visited caches, in Martinsville, VA, is "Sticks" (GC1WNG9), based on Karl Edward Wagner's well-known horror short story. Locating this one requires that you find and follow a trail of sticks woven into shapes such as the one you see in the photo below. Finding the sticks can be a challenge all its own, and a misstep in these woods might draw down from the stars the ghastly entity known as Nyarlathotep, the Messenger of the Great Old Ones. If this should happen, well... I shudder to think. 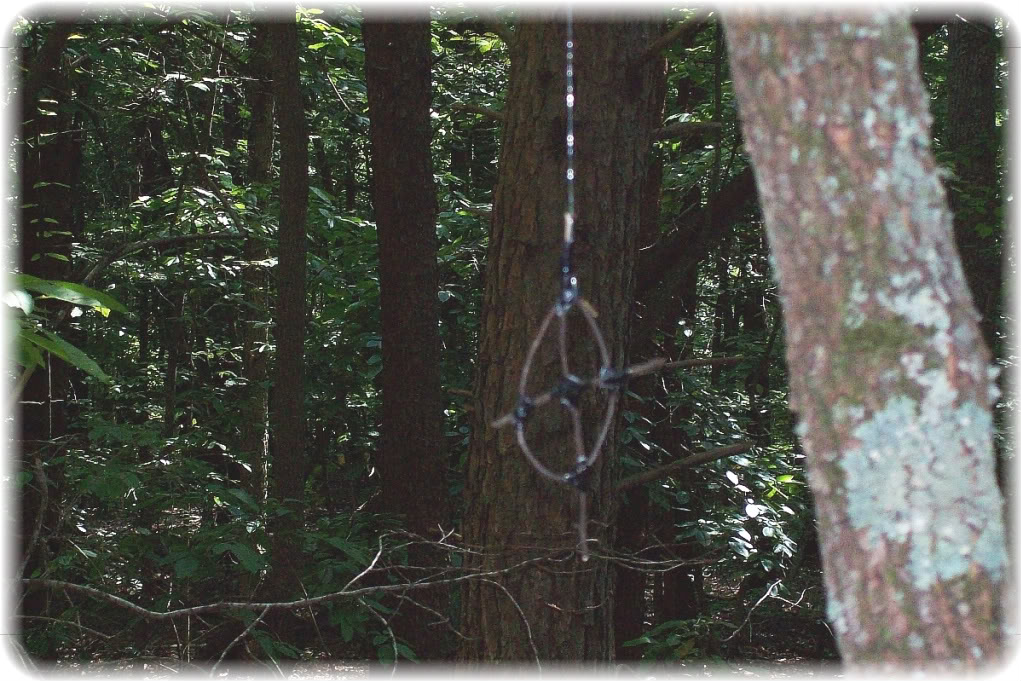 A short distance north of Greensboro, in the town of Eden, NC, hidden away from any of the main roads, you can find an old, abandoned, crumbling bridge over the Dan River. If you're willing to risk life and limb (again), you may wish to seek "Abandon Hope All Ye..." (GC325VM), which is not large enough to hold any swag, but may in fact contain more evil than many that, on the surface, seem menacing as all getout. 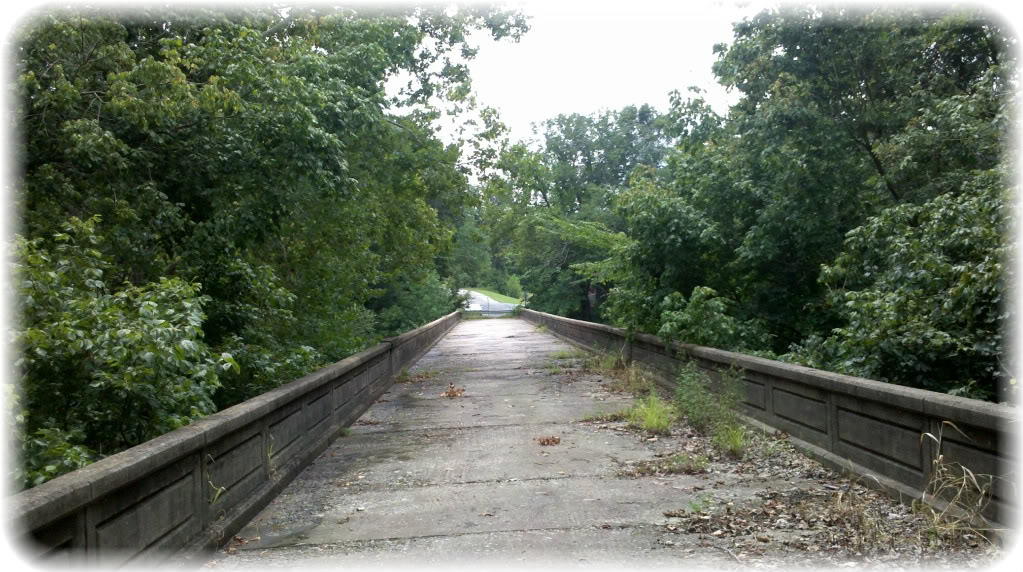 These are just the tip of the iceberg, as I have placed dozens of other spooky-themed caches in the area. They come in all shapes and sizes, and they may be located in deep woods; in long-lost, forgotten corners of the local landscape; in shadowed, ancient neighborhoods where you're as likely to find ghosts as anyone living. In any event, come on out and do some geocaching. Even if you're nowhere near my area, look around you — there are caches everywhere, and there's no shortage of hides with scary themes wherever you are. And you just never know where I might hide my next one. Or what you'll find when you go after it....

Visit www.geocaching.com for the answers to all your questions about caching. Go forth, have fun, and... beware.
Posted by Stephen Mark Rainey at 12:10 AM