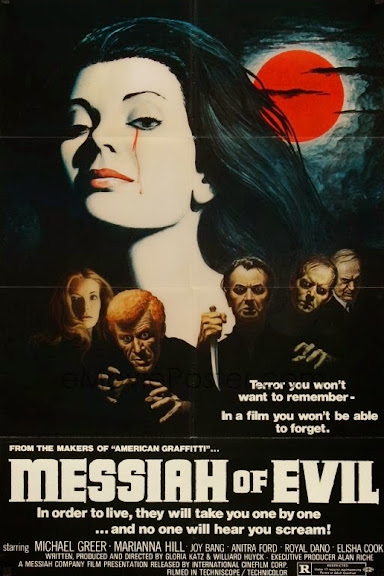 1973's Messiah of Evil, written, produced, and directed by Gloria Katz and Willard Huyck, somehow got on my radar several years ago; I recall not the specific circumstances. I do remember that the big draw for me was Anitra Ford, who was one of the original models from The Price Is Right. I might as well confess that in my young teens, I watched The Price Is Right from time to time because... well... Anitra Ford. Our main female protagonist, however, is a young woman named Arletty, played by Marianna Hill, who comes to a small town on the California coast to find her missing father, an eccentric artist, played by familiar character actor Royal Dano (fresh from Night Gallery). Another familiar face is Elisha Cook Jr. (fresh from just about every movie from the 60s and early 70s). Now and then, especially during the Halloween season, I find it necessary to load up the DVD and give it a look, largely because of Anitra Ford, but also because it's a creepy-as-hell movie. More than a tad Lovecraftian, with a dash of Mario Bava and George Romero thrown in, Messiah of Evil offers a handful of gory moments, but it's the pervasive sense of the locale and its inhabitants being pretty far off-kilter that makes the film suspenseful and occasionally unnerving.

Indeed, as soon as Arletty arrives in the town of Point Dune, it's clear that something about the town is out of whack. Most of the time, the place is deserted, and the few people in evidence usually appear quiet, sullen, furtive, bringing to mind Lovecraft's description of the town of Innsmouth and its strange, quasi-human population. In her father's studio, Arletty discovers that he has been producing some rather disconcerting artwork: stylized, distinctly creepy portraits painted in duo-tone, a rendering of a huge staircase, a life-sized painting of a figure that resembles Rod Serling from The Twilight Zone. But of her father there is no sign, and no one at the local art shop even knows him.

Soon, Arletty makes the acquaintance of an odd trio who have arrived in town: a young, aristocratic chap named Thom (Michael Greer) and two young women, Toni (Joy Bang) and Laura (Anitra Ford), who appear fascinated by a local legend — that when a blood-red moon appears, as it did a hundred years earlier, a strange darkness will overtake the town. Thom interviews an old man (Elisha Cook Jr.), who claims he has seen the blood moon, a "dark stranger," children eating raw meat, and other bizarre goings-on that suggest everyone in town — except for him — has gone mad. He says the townspeople don't kill him because he's a harmless drunk (a strong parallel to old Zadok Allen in Lovecraft's "The Shadow Over Innsmouth"). However, due to their association with with the old man, the threesome is ordered by the motel manager to leave. Reluctantly, Arletty allows them to take up residence with her at her father's place.

To her horror, Arletty begins to have strange cravings for blood, and she feels no pain when she accidentally burns herself — the very kinds of things the old drunkard indicated was happening to others. Her companions appear to be immune to this seemingly contagious condition. Laura, however, desperate to get away from the oppressive studio, ventures out for a walk, only to encounter a truckload of townspeople who appear almost catatonic — except for the driver, a strange albino (Bennie Robinson) who offers her a ride. Against her better judgment, she accepts. To her shock, the driver presents her with a live rat, apparently to eat. When she refuses, he gleefully chows down on it. Disgusted, she gets out of the truck and goes to a nearby supermarket, which, like so many places in town, appears deserted. However, inside, she finds a number of townspeople gathered in the meat department, happily gorging themselves on raw meat. Upon seeing her, they chase her down and, in rather Romero-esque fashion, happily devour her alive and screaming.

Shortly afterward, unaware of her companion's fate, Toni visits the local cinema. Once she goes inside, the theater staff close and lock the building. At first, there is only a handful of people in the auditorium, but as the movie runs (a western featuring Sammy Davis Jr.), more and more townspeople fill up the seats, all silent and robotic in manner. When Toni realizes they are closing in around her, she panics and tries to escape, but the crowd traps her and are soon enjoying a feast of flesh and blood.

Arletty has found her father's journals and, as she reads them, discovers that he underwent the same cravings and lack of pain she has been experiencing. He relates that, in years past, during the blood moon, a dark stranger — a survivor of the Donner Party — came to Point Dune and began converting the locals to a new "religion," which involved worshipping an unknown, evil deity and eating human flesh. While her father is fighting this strange conversion, which is as much physiological as psychological, his will is beginning to falter. He finally appears to her and warns her to get away from Point Dune and never return, but now the evil cravings overwhelm his resistance and he attacks her. To save her life, Arletty throws an oil lantern at him, which sets him alight and finally destroys him.

She and Thom attempt to escape from town, but the rabid townspeople pursue them as they run along the beach. Thom drowns in the ocean, the zombie-like horde captures Arletty, and, at last, the "dark stranger" manifests himself. This character is never fully revealed, though it seems clear that, at least in body, the stranger is Thom. Rather than kill her, he charges Arletty to go forth and spread his evil influence wherever she goes. At the end, we see that she has complied with the stranger's order — only to end up confined in a mental institution.

Messiah of Evil takes its time getting where it's going, relying on an atmosphere of wrongness to keep the viewer engaged — an aspect of the film that earns my whole-hearted approval. I am beyond weary of the slam-bang cuts and endless crashes of deafening noise that are the hallmark of most contemporary horror movies. These tricks do not for horror make. The long, slow scenes that introduce Point Dune, with its weirdly mesmerized inhabitants, these instill far more dread than any clashing, clanging, jumping, and screaming. Most of the more frenetic scenes in Messiah are accompanied not by deafening bursts of sound but by a warbling, whistling electronic score that generates a sense of other-worldliness, of emotional rather than mere physical discomfort.

The first truly bizarre character we meet is the albino played by Bennie Robinson. With his deep baritone voice and penetrating glare, he conveys a unique and ominous presence. When he stops to give Laura a ride and shows her the rats he is carrying, she asks what he's going to do with them. With a hellish chuckle, he says, "I'm going to eat them, that's what I'm going to do with them!" He then proceeds to bite the head off a rat, turn, and smile at her with blood running from the corner of his mouth. It's his delivery of that line and his smile, more than the actual chomping of the rat, that make this scene so disconcerting. Given his early introduction and remarkable screen presence, he appears to be a character bound to play a more significant role in the film than he actually does. After his first few scenes, he fades more or less into the background. Less a shortcoming than a surprise, I would say; still, not presenting him as the actual "dark stranger" seems a wasted opportunity.

The true standout set pieces in the movie are Laura and Toni's death scenes, in the grocery store and the movie theater, respectively. Both are nerve-wracking in their build-up — excruciatingly so. However, both scenes, while ending on violent notes, only suggest the brutality of the young women's deaths; unlike the gory violence of George Romero's zombie films, the less-graphic depiction of these young women being devoured by animalistic humans nonetheless has the power to make one squirm.

Messiah of Evil is a true product of its time — featuring characters, settings, pacing, and a style that couldn't be reproduced in today's world. But much like Night of the Living Dead, the open window to the past it presents admits a chill that is right here and right now. Certainly, this film is fraught with imperfections and at times falls short of its promise. However, I'll spare you specific examples to keep from going overlong and because, for its better part, the film does deliver, in spades.

Fans of Lovecraft, Romero, and atmospheric horror in general can't go wrong with this one. I rate Messiah of Evil a pretty good slew of Damned Rodan's Dirty Firetinis.